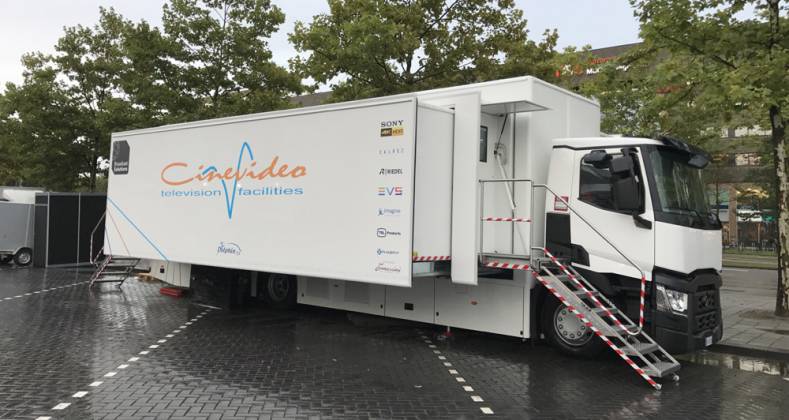 New outside broadcast vehicles of all shapes and sizes continue to hit the road and among the most notable of this year’s crop is Cinevideo’s first venture into Ultra HD and HDR, Dolphin 7.0. Although on a fixed chassis, this three-expander truck can be configured to offer approximately 60 square metres of space for two different productions running simultaneously.

Based in the town of San Giovanni Teatino on the eastern coast of Italy's Abruzzo region, Cinevideo was established in 1983 to provide facilities for national public broadcaster RAI, regional TV and news organisations. Over the years it has built up an outside broadcast fleet, headed by OB1, a HD/5.1 truck as its main mobile production unit, plus four smaller satellite news gathering (SNG) vans. The company also offers ENG (electronic news gathering) capability and post-production suites.

Dolphin 7.0 adds UHD and HDR to Cinevideo's offering. "We decided to build this truck to be ready for new demand in the market," explains Andrea Buonomo, the company's executive sales manager. "In Italy 4k is starting to grow and in the next year it will be the future, although demand is not too high right now." 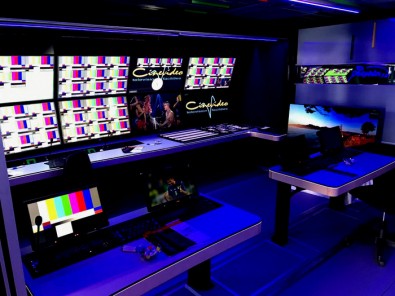 Mediaset, the largest commercial broadcast group in Italy, has already produced a few events using 4k but is reported to be considering enhancing HD with HDR as an interim step prior to full UHD services. Sky Italia is due to launch a 4k channel next year, with European football a primary focus. "Our idea is that the 4k market will increase exponentially over the next few years," Buonomo comments.

Dolphin 7.0 is substantially bigger than OB1, although it is also on a rigid axis, with three expanding sections giving more space. Buonomo says that in the 12 years since OB1 first went on the road the needs of both Cinevideo's clients and the market in general have changed considerably. "For a production with three or four cameras you can have more than ten people working for your client inside the truck," he adds.

The design brief was for a vehicle that was big but not huge, as has been the trend over the last 15 years with so-called 'super trucks'. "We didn't want an articulated trailer but a fixed chassis truck that could reach awkward, uncomfortable locations," explains Buonomo. "We also wanted something that our existing drivers would be able to handle and not a vehicle that would call for a specialist driver."

This posed something of a challenge for systems integrator Broadcast Solutions, based in Poggio Picenze, because non-articulated trucks have been generally associated with work on smaller productions. "Until now a standard van with a three-axis configuration - that is a coach length of less than ten metres - was configured for only a medium to small production capability using 15 cameras or fewer," says Nicola di Fabio, sales and marketing director at Broadcast Solutions Srl. "With Dolphin 7.0 we have introduced a new concept whereby a big event configuration - 24 cameras and ten replay servers - can be accommodated without ergonomic compromise." 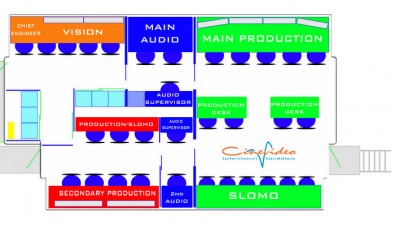 Di Fabio comments that the truck has been designed to be as flexible as possible so it can be used on a variety of events and satisfy all customer requirements. "Versatility is a key function in live production and the quick configurability of the Dolphin 7.0 helps to seamlessly move from different productions or even to different clients for the same production without the downtime normally required to prepare a mobile unit for a specific event," he says.

Broadcast Solutions worked with Cinevideo on the design and build of Dolphin 7.0, selecting technology and equipment for both present today and the future. "We recommended adopting technological infrastructure solutions that would allow Cinevideo to meet current market demands while anticipating future requests for the new hybrid SDI-IP environment, with transparent operations across the two signal formats and seamless and synchronous switching between SDI and IP domains," di Fabio says.

Among the various manufacturers involved was Sony, for which Broadcast Solutions is Italian systems integration partner. Sony products installed into Dolphin 7.0 include a XVS-800 multi-format video switcher (covering 4k, 3G, HD and SD) and a HDRC-4000 production converter unit, which is able to handle simultaneous real-time 4k HDR and HD SDR streams as part of the manufacturer's SR Live for HDR workflows platform. 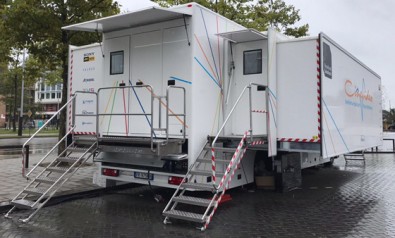 As well as being suited to 4k/HDR, di Fabio says the Sony-based production environment allowed the creation of a "smart ecosystem" for hybrid SDI-IP, distributed audio and multi-viewer processing, monitoring, signalling and control, in addition to both wired and wireless communications.

The potentially high number of sources in different formats is monitored on 24 displays in both HD and 4k. These can be arranged as HD mosaic, quad splits or single 4k screens. Routing for this is provided by an Imagine Communications Platinum IP3 15RU router. This deals with up and down conversion of video, audio multiplexing and de-multiplexing, plus discrete AES and MADI distribution. Other equipment provided in Dolphin 7.0 includes two Calrec Audio Artemis mixing consoles, which can be set up for immersive formats such as Dolby Atmos as well as 5.1; Jünger Audio loudness processing; PHABRIX monitoring; Riedel Communications Artist intercom; and EVS replay servers.

Dolphin 7.0 was not built for any specific project but has worked on several productions since coming into service. It is due to be part of RAI's coverage of Basketball Champion League games in Avellino during December.

While Cinevideo's other OB vehicles have predictable, prosaic designations - OB1, OB2, OB3 and so on - Dolphin 7.0 breaks the mould. Andrea Buonomo explains that this was partly inspired by the symbol of San Giovanni Teatino, which is a dolphin, and partly by the "intelligence, acuity and proper language" of the marine mammal. "So with Dolphin we've a new language of production, like 12G workflow, two different productions in the same truck and much more."