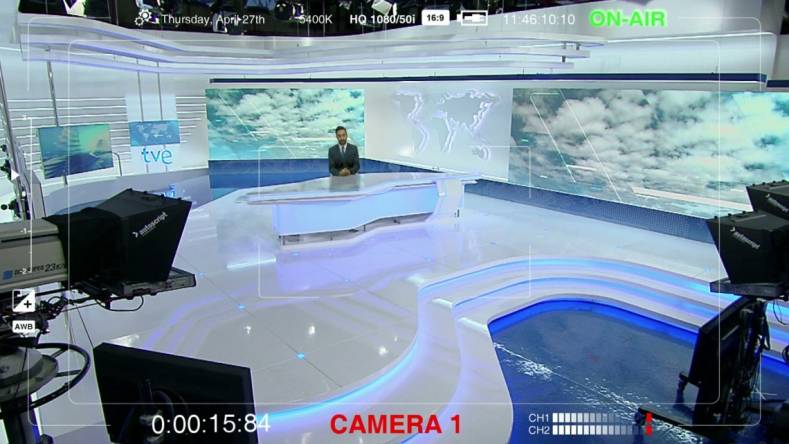 When Brainstorm shows you a Virtual Set on the screen, you don't need to dust the surfaces or sweep the floors.

Brainstorm’s InfinitySet 3 combines Virtual Set and motion graphics technology to fill news sets with a Reality that isn’t really there.

At IBC 2017, Brainstorm Multimedia will bring its virtual studio application, InfinitySet 3, to Europe for the first time. Judging by the crowds it attracted at last April’s NAB Show, expect it to have a major impact.

As Miguel Churruca, marketing and communications director at Brainstorm, explained to The Broadcast Bridge in a personal interview direct from Madrid, Spain, “InfinitySet 3 now incorporates the Aston graphics creation toolset,” he said, “which means it can edit, manage and create sophisticated 2D and 3D motion graphics with total control at a speed never before achieved.”

One reason for this increased power is the inclusion of advanced rendering features such as Physically Based Rendering (PBR), and the collaboration of the Unreal gaming engine developed by Epic Games.

“Working in conjunction with Brainstorm’s own eStudio engine, together they form what we call the Combined Render Engine feature,” Churruca said. “The best thing is that it can easily be integrated into a broadcaster’s existing infrastructure.

With VirtualGate, the presenter can be both on set and in the Virtual Reality. Click to enlarge.

With this augmented processing power, Brainstorm will be able to demonstrate new Augmented Reality features such as the VirtualGate capability with which the on-screen talent appears not only in the virtual set, but also in the additional “virtual” content within it.

This blurs the line between the studio and the remote, letting a sportscaster seem to move between the two with ease.

Visitors to IBC can look forward to the VideoCAVE, a Mixed Reality presentation that combines practical monitors in a real set that performs as a CAVE multiple window, again with the on-screen talent appearing right inside. Thanks to Brainstorm’s track-free technology and its Teleporter feature, InfinitySet 3 can use either real, live input or pre-recorded footage as the background plane for the chroma-keyed talent.

When on-screen talent steps into the VideoCAVE, to the viewers it's like entering a whole new 3D world. Click to enlarge.

“That way the talent becomes a virtual traveler and can be tele-transported to any remote location at ay time,” Churruca said, “while actively interacting with real and virtual elements brought to life by our unique 3D Presenter feature.”

Also at IBC, Brainstorm will also be showing off VisualMedia, a 3D real time graphics visualization system based on social media feeds and second screen data aggregated by Brainstorm and never.no. Created as a result of both companies’ partnership in ‘Project VisualMedia’ developed from the Europe 2020 Horizon platform, VisualMedia presents structured social media information via data-driven 3D motion graphics. It will be demonstrated in its final configuration prior to VisualMedia’s commercial in debut in January 2018.

In addition, we’ll see SmartSet, a template-based Virtual Set and Augmented Reality system for small and local TV stations. SmartSet allows the station’s newsrooms to give their hosts a home without having to actually build the set itself by using purpose-built templates of a virtual set.

Perhaps the most exciting brand new introduction we’ll see from Brainstorm at IBC 2017 is Neuron. It’s an integrated, MOS-based template-based graphics integration system designed not only for the newsroom but also for most of the other broadcast workflows. Built on the experience with their BrainNews graphics for news system, Neuron allows the integration of Brainstorm’s real time 3D graphics engine into the broadcast workflow without the need for continuous input from designers.

All of Brainstorm’s products, except VisualMedia, are due to be released by Q4 this year.