FOR-A will highlight its range of production switchers at the show, which offer the ability to integrate with ClassX’s 2D/3D character generation and live motion graphics and playout software. The latest unit in FOR-A’s line of vision mixers, the HVS-490 HD/4K-UHD unit, will make its IBC debut. First introduced earlier this year at NAB, the HVS-490 offers an extensive feature set in a compact, affordable unit.

Other switchers that will be shown in FOR-A’s booth include the HVS-2000 and an updated version of the HVS-100, the HVS-100TB2, both of which will be showcased with integrated Thunderbolt™ technology (*1) that allows the units to easily interface with external devices. The switchers’ Thunderbolt 2 I/O expansion cards enable single-cable transfer of four channels of HD video to a computer. 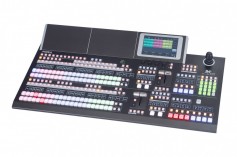 On the routing switcher front, FOR-A will showcase its MFR series of solutions, including the 12G-SDI compatible MFR-4000 and MFR-3000 3G/HD/SD/ASI unit. The MFR-4000 provides 12G-SDI compatibility across all 72 inputs and 72 outputs, bringing powerful support to 4K-UHD and 8K routing. The MFR-3000 offers up to 64 inputs/64 outputs in a 4U frame, and is an ideal solution in midsize systems where variable input/output capabilities and mixed signal formats are used.

Other FOR-A products that will make their show debut at IBC include the FRC-9000 and MCC-4K frame rate converters, as well as the USF-10IP 10 GbE IP Converter - a dual 10 GbE video over IP module series that offers high-quality mutual conversion of any major standard IP video format, including ASPEN, NMI, SMPTE 2022-5/6, SMPTE 2110, TR-03/04 and most of the latest IP formats.