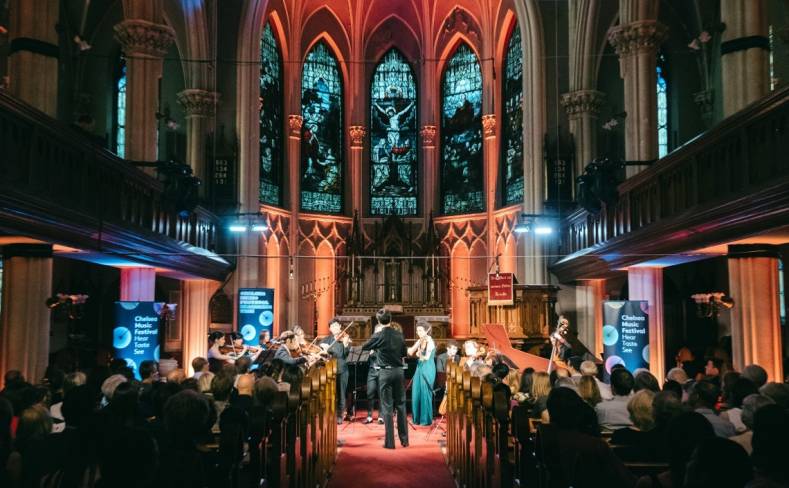 Anderson Audio New York captured the performances at the historic church in Sennheiser’s AMBEO 3D audio. Built in 1884-85 in the Romanesque Revivalist style, the church is not only notable for its appearance but also for the acoustics of its main chapel.

For the first time, live recording experts Jim Anderson and Ulrike Schwarz of Anderson Audio New York were on hand to capture every note performed there during the festival for delivery via Sennheiser’s immersive AMBEO 3D audio format. The idea for a 3D capture of the performances germinated during last year’s festival, which Anderson and Schwarz had attended as guests. 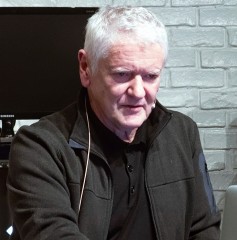 “We were very impressed with the level of musicianship at the festival, and when we heard that several performances would take place at St. Paul’s our interest was further piqued,” said Anderson. “This chapel was legendary in the 80s and 90s for serving as the location for many audiophile recordings of classical and jazz music.”

Anderson, a multiple Grammy and Peabody Award winner, is a freelance audio engineer and a professor of recorded music at the Clive Davis Institute of Recorded Music in the Tisch School of the Arts at New York University. A former president of the AES, he is a pioneer in stereo broadcasting who now works in surround sound — engineering a Grammy-winning Best Surround album in 2013.

When at NPR in the early 1980s, Anderson was one of the first American broadcasters to experiment with stereo sound in on-air storytelling. He built his own X/Y stereo microphone system, using a pair of Sennheiser MD-241 microphones on a homemade rig weighing over five pounds.

Anderson and Schwarz had also recently experienced Sennheiser’s AMBEO 3D immersive audio format in a demonstration at Sennheiser’s pop-up store in SoHo, and realized the potential for a totally unique recording of a live performance using the cutting-edge format.

It was not long before they contacted Sennheiser and with the German audio innovator on-board as a festival sponsor, worked together on selecting the perfect Sennheiser microphones to capture every nuance of each memorable performance. 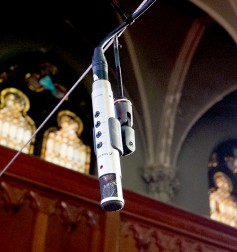 Anderson and Schwarz’s miking solution consisted of ten fixed microphones suspended from wires stretched across the chapel. These included four MKH 800 TWIN microphones suspended above the main seating area above balcony level in a square. A pair of MKH 800 mics and a pair of MKHC 8020 omnidirectional capsules connected to MZE 8120 extension tubes constituted a second, lower square, suspended just below balcony level.

“Together they create the AMBEO Cube,” Anderson said. A pair of MKH 8020 microphones were mounted on an A/B bar above the audience at front, facing the stage directly.

The MKH 800 TWIN microphones offer incredible versatility for AMBEO 3D recording applications due to their unique dual independent capsule design. Unlike other dual capsule microphones, each of the MKH 800 TWIN’s back-to-back capsules has its own audio output, enabling users to conveniently set and modify the microphone’s polar pattern on the mixing desk, either in the recording process or during post production.

Also, equalization can be applied separately to the front and rear of the pickup area to correct room imbalances. “Having that kind of flexibility in the mix stage is very exciting,” Schwarz said.

Anderson Audio New York’s recording setup was only equipped to handle 24 channels this year, so building their entire AMBEO cube with eight MKH 800 TWIN mics was not feasible while accommodating their other miking needs, but they were able to turn to other Sennheiser microphones to round out their sound, including a longstanding favorite: the original MKH 800.

“We have both found that the MKH 800 is an exceptional microphone,” Anderson said. With the MKH 800’s flexible polar pattern controls they were able to dial in a wide cardioid pickup pattern that was perfect for the front of the AMBEO mic cube, flanking their A/B pair. 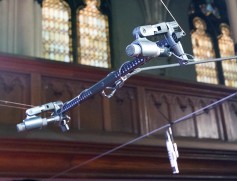 For the lower rear pair, line of sight concerns were paramount due to video cameras positioned on the rear balcony, which led Anderson and Schwarz to turn to a pair of Sennheiser’s MKHC 8020 microphone heads suspended from MZE 8120 extension tubes for a compact, omnidirectional solution with deep low-end extension down to 10 Hz.

A pair of MKH 8020 microphones constituted their main A/B pair and provided an excellent stereo capture of anything the festival put in front of them, which will allow them to enhance the focal point of the audio recording during their AMBEO mixdown as needed.

“We’ve had string quartets, piano trios, jazz combos, and we’ve really been able to cover them all quite well with only the occasional spot mic needed if the staging was going very far back,” Anderson said. Those individual spot microphones included a Sennheiser MKH 8040 cardioid microphone and the active tube system of the MKH 8000 series, which saw use as a free-standing drum overhead during select programs.

A pair of Sennheiser MKH 8020 were mounted to an A/B bar to handle all primary pickup of instruments on-stage. Anderson and Schwarz only occasionally turned to additional spot microphones for coverage throughout the festival for larger ensembles.

“These are microphones we use all the time, and it’s fun to have a chance to put them in this situation and stretch them a bit with AMBEO,” he said. “I think that when people hear these recordings they’ll be inspired to do more of this kind of thing.”