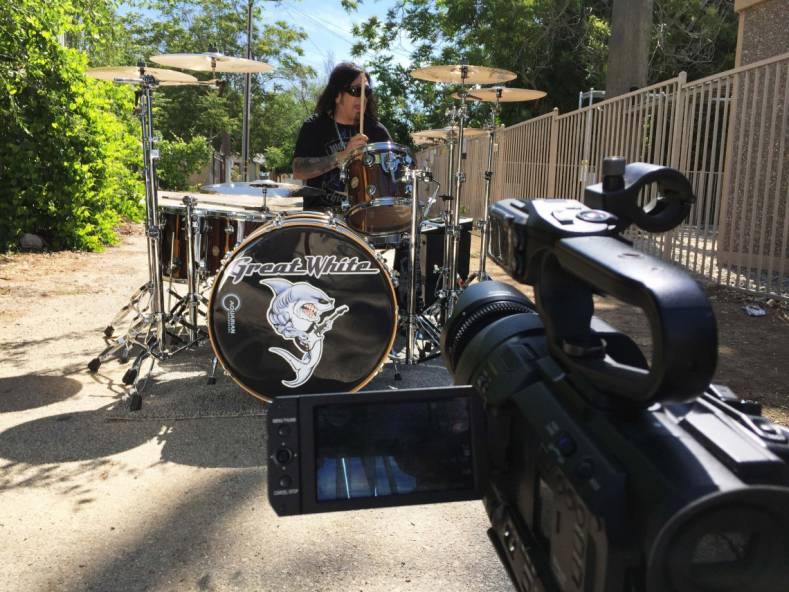 Vistar Media Solutions and Infinity Media Productions, two video production companies based in in Grand Junction, Colo., partnered to produce the video. “Big Time” was mastered in 1080p, but performance footage of the band was captured in 4K. The narrative part of the video, which follows the story of a young rocker trying to make it big in the industry, was shot in 1080p using the camera’s slow motion (120fps) mode.

Scot Stewart, owner and creative director of Vistar Media Solutions, has owned his JVC GY‑LS300 for more than a year. He was sold on the camera’s Micro Four Thirds (MFT) lens mount and Variable Scan Mapping, which adjusts the Super 35 CMOS sensor to provide native support EF, PL, and other lenses when used with third-party adapters. For “Big Time,” he paired the LS300 with four different Rokinon cine lenses. “I was very pleased with the image quality and the camera/lens combination,” he said.

According to Stewart, the band wanted a very “fast moving” video that included a lot of angles of the same moment in the song. To shoot additional footage without significantly moving the camera or changing lenses between takes, he used the camera’s Prime Zoom feature, which allows shooters using fixed-focal (prime) lenses to zoom in and out without loss of resolution or depth of field. “When you only have three or four days to shoot a music video, repositioning a camera can really be a hassle,” he explained. “The 4K image capture and Prime Zoom really helped us out. Being able to zoom a little bit was huge for me.”

“Big Time” was a challenging departure for Stewart, who focuses mainly on local and political commercials as well as corporate video. Though almost all his finished projects are mastered in 1080p, Stewart shoots almost exclusively in 4K because it significantly cuts his shoot time. For example, he can record an interview once with a wide shot, then crop the shot into a close-up in post. He also said the camera’s low-light capabilities allow him to shoot interviews with very little light modification, which also speeds up the production process.