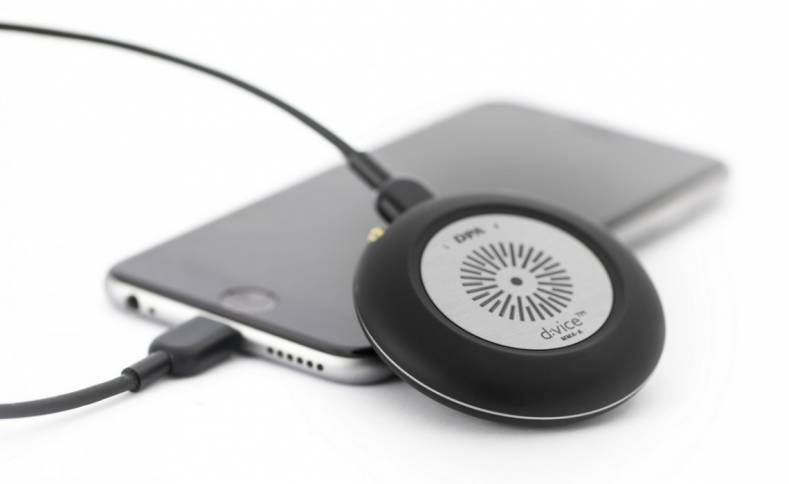 DPA d:vice allows the use of professional microphones with cell phones and other iOS devices.

While the recording quality on mobiles has increased considerably in recent years it is not necessarily top level audio - with the added disadvantage that holding a phone in front of an interviewee does not look tremendously professional.

DPA has addressed both issues with the new d:vice MMA-A digital audio interface. This mic preamp enables a proper broadcast microphone to be connected to iOS-based units, Macs or PCs. The d:vice, which was shown during the recent NAB Show in Las Vegas, can be used to both record interviews and stream audio for live broadcasts.

The d:vice MMA-A is a two-channel preamp combined with an A-D converter. It can work in mono as well as dual and stereo modes. While radio and audio-only TV reporting are the primary applications, the unit can also be used for location effects recording. Featuring interchangeable lighting and USB cables, the two-inch diameter d:vice is easily portable and pocket sized.

Connectivity is through MicoDot inputs, which work with all DPA miniature microphones, including the d:screet, as well as the d:fine headset, d:vote instrument mic and d:dicate recording models, featuring the optional MMP-G preamp. The d:vice works with a downloadable DPA app from the Apple Store, which allows users to set gain and filter levels.

Commenting on the introduction of the d:vice, DPA product manager René Mørch said, "The d:vice digital audio interface was designed with broadcasters and mobile journalists in mind but can also be used by other content makers for recording music, filming on location and during both live and recorded broadcasts. With this interface users can portably record and stream clear and professional audio from the connected microphones."