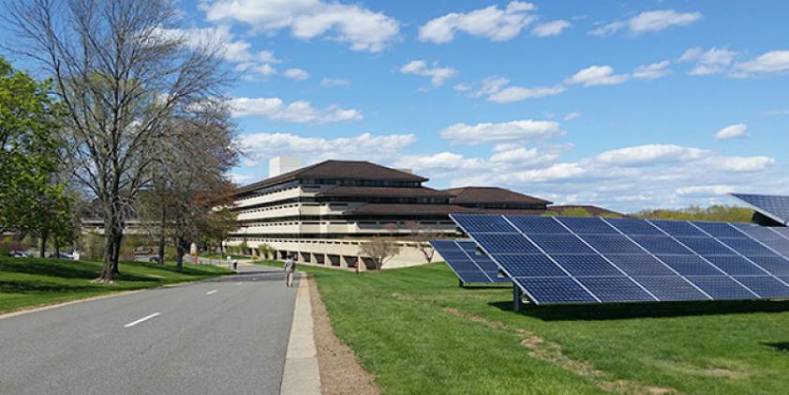 Verizon knows a thing or two about delivering high-quality audio and high-definition video signals across the country. It’s also become quite adept at providing its 160,000 employees with high-quality live and pre-recorded internal corporate communications webcasts and videos that can be viewed live or on-demand at a later date.

As part of its quarterly reporting to employees, Verizon is now sending out television news-style productions that include live speakers at different Verizon offices and guest “correspondents” that are often located in disparate locations that must be technically brought together to create a seamless program and deliver an easily understandable message. 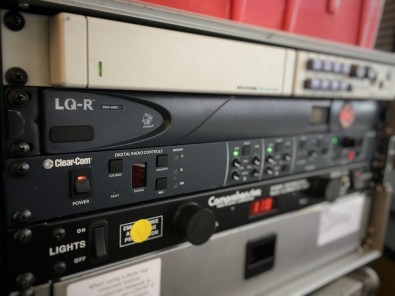 The company’s corporate IP network and the public Internet are used to connect these locations and the latest Intercom signal distribution technology from Clear-Com help keep the various camera crews connected. Due to its Voice over IP (VoIP) support, the LQ IP Interface box allows Verizon to set up camera crews in places that they never could before—basically anywhere with an IP connection. Distance between locations is not an issue.

Chris Nicolaou, an independent consultant and owner of Nicolaou & Associates (Dallas, Texas), helps coordinate the technical aspects of the webcasts and makes sure that each crew is equipped with a small two-channel LQ IP Interface box from Clear-Com, which converts an RTS signal to IP for unfettered and flexible crew communications. The system is also used for sending high-quality (20Khz) IFB signals to the executives and other talent between LQ devices.

The LQ IP devices used by Verizon’s remote crews include two ports that support both the Clear-Com and RTS communication signaling. At Verizon they use two-channel RTS belt packs and headsets to send and receive two stereo audio channels. The crew communicates with each other locally on one channel and the second is used for communications with the company’s headquarters in Basking Ridge, NJ. They also use a larger four-channel LQ IP Interface unit. This larger unit also features 4 four-wire Intercom ports from the large, 60 port Clear-Com Eclipse HX matrix set up in Basking Ridge. This gives them full two-wire connections in each direction. Clear-Com offers a full range of LQ IP Series interfaces in different sizes with varying levels of connectivity (from 2 to 8 channel two-wire configurations). 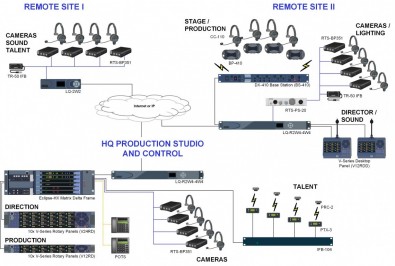 Using the public Internet and the LQ IP’s VoIP networkability, Verizon crews connect from literally anywhere and freely communicate as if they were in the next room. Click to enlarge.

“This initiative really started a few years ago when our executives decided they wanted to deliver their messages from among Verizon employees in their home offices. This meant sending crews to remote sites but still maintaining full control here in Basking Ridge,” said Nicolaou. “Coordination is key, but also the equipment has to work each and every time. Anyone who’s done webcast knows that things can go wrong with streaming devices from time to time, so our crews have to be in constant contact with each other and ourselves here at the headquarters. The Clear-Com LQ IP Interface devices give us that reliable connection and they’re very easy to use.”

From the control room in Basking Ridge, the engineering team uses Haivision Makito HD encoders and decoders to move its transport streams (1080p HD at 4 Mbps). For each remote location they’ll send a camera and audio package out, sized appropriately (single camera or multiple cameras) for the location. Once a production has started, the location team then sends back a contribution HD feed over the Makito IP-based encoding system to Basking Ridge.

“We decode [the contribution feed] in Basking Ridge and then push back an HD backhaul feed to the locations so they can see what’s going on,” said Nicolaou. “The LQ boxes help us support two channels of intercom at each location off of our large Intercom matrix in Basking Ridge. This way anybody on our intercom matrix can talk to anyone else involved in the production via a party line that we've set up with the LQ boxes.”

Verizon now maintains six Clear-Com LQ IP Interface units but could easily add more if the need arises. Their largest webcast involved seven locations, including Basking Ridge. Nicolaou said that because the LQ IP Interface boxes are based on Voice over IP technology, they can easily seek out and find the Verizon hub during a webcast, ensuring a reliable connection with very low latency.

“The intelligence of the LQ IP Interface make it easy to connect to Verizon’s main hub and, when our people can all talk to one another, it keeps everything running smoothly. That’s a big benefit for us.” 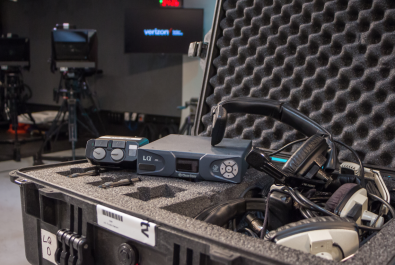 Verizon sends out pre-configured fly packs of Intercom gear to each location participating in a particular corporate production. Crews use RTS headsets and belt packs in tandem with a Clear-Com LQ IP interface unit.

He said that reliability is the biggest issue with webcasts. There have been instances where they’ve had technical issues getting the streaming device working correctly at the locations, but they’ve never had a problem with the LQ boxes. Onsite crews simply program the LQ IP box to point at the studio IP addresses and the boxes automatically discover the network and are up and running within minutes of set up. The LQ IP system, he said, is so intelligent that once they virtually connect with the corporate hub, they can send out the Intercom signals anywhere; as long as they are on the same network. In addition, the LQ IP boxes can recall stored settings, so now location setups and establishing a good IP connection are faster and easier than ever.

The Clear-Com LQ IP Interface boxes support either two-wire (RTS) or four-wire (Clear-Com) channels, providing Nicolaou and his crews with two audio Comms channels each way. In Basking Ridge, Verizon has a larger LQ IP Series unit that has up to eight channels, which has been used to send audio to and from a production that involves the coordination of numerous crews and feeds.

Most units that go out with crews, however, have two ports and they’re based on the RTS communication signaling. We use them with RTS belt packs to get the two channels. The crew communicates locally on one channel and the second is used for communications with Basking Ridge. The larger unit has four channel of RTS communications. Then it also has four four-wire Intercom ports from our Matrix. These are full two-wire connections in each direction. Verizon chose the RTS belt packs and headsets because they can be operated over a single two-wire cable, making them more practical to deploy and less expensive to purchase.

In fact, Nicolaou said it’s just as expensive to buy belt packs and headsets as it is to buy the LQ boxes themselves.

Keeping crews connected, either locally or remotely, has also been the hallmark of successful audio and video production. With the Clear-Com HQ IP Interface box, that has become a lot easier—streamlining production workflows and reducing costs—and Verizon employees are now better informed.