This may be the new broadcast tower. Standby for another paradigm shift and remember that its all about the brand.

Just when TV broadcasters are starting to feel good about recent news regarding the move to ATSC 3.0 transmission, AT&T is preparing to launch field tests of a new universal transmission technology. Here, antennas and devices mounted along power lines effectively deliver broadband and mobile traffic. No more need for broadcast towers or buried cables if these new GigE connections prove effective.

Do you remember the promise of broadband-over-power lines (BPL) last decade? The BPL idea was floated a few years after Y2K, when the fastest broadband was measured in Mb/s. BPL was a contemporary spin-off from power line communication (PLC), an invention developed 103 years ago. Since then, electric companies have used PLC by bundling RF data on the same transmission line as electrical current to monitor power grid performance. PLC requires near dial-up bandwidth by today's standards.

Thankfully, the Ham radio group ARRL became rightfully concerned when BPL began to look like it could be the future. The ARRL argued over the past decade that "BPL represents a potential for interference that is nearly without precedent." One BPL device can generate as much noise as 1000 to 10,000 other devices such as garage door openers, that are regulated by different Part 15 rules, the ARRL said.

BPL couldn't handle broadband when it wasn't even near a GB without becoming a dreadful RF mess. The hams made a strong point. The FCC responded with a move to notch the ham bands from the BPL spectrum but it was too little too late, and BPL still ruined short wave radio in general. As bandwidth needs and speeds continued to increase, the luster of BPL rapidly diminished. Good idea, wrong millennium.

AT&T Labs engineers shifted their focus from BPL to millimeter wave (mmWave) technology, and they became curious about combining mmWave and powerlines. No one in the industry had yet tried to combine these technologies.

Experiments led to AT&T's recently unveiled Project AirGig. Project AirGig is a new technology from AT&T Labs that according to its press release, “could one day deliver low-cost, multi-gigabit wireless internet speeds using power lines.” AT&T says Project AirGig is unlike anything that’s out there. AT&T already has more than 200 patents and patent applications for Project AirGig. 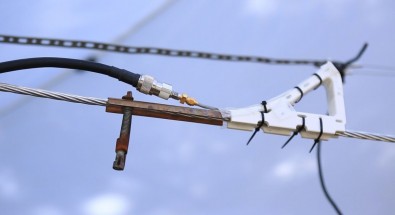 The project involves experimenting with multiple ways to send a modulated radio signal around or near medium-voltage power lines. There is no direct electrical connection to the power line.

Project AirGig has the potential of multi-gigabit speeds in urban, rural and underserved parts of the world. It delivers last-mile access without any new fiber-to-the-home, and yet is flexible enough to be configured with small cells or distributed antenna systems.

As part of Project AirGig, AT&T Labs invented low-cost plastic antennas and devices, which are located along the power line to regenerate mmWave signals for 4G LTE and 5G multi-gigabit mobile and fixed deployments. These patent-pending devices can mean low hardware and deployment costs while maintaining the highest signal quality. AT&T believes its approach will be unique in the industry.

Project AirGig also helps utility companies by enabling and expanding a variety of smart-grid applications. The RF traveling along the line could provide early detection of line integrity issues such as encroaching tree branches. Power companies could use it to pinpoint specific locations down to the line segment, where proactive maintenance could prevent problems. It could also support utility companies’ meter, appliance and usage control systems. It has the potential to be a win for AT&T customers and for the utility companies.

“We are looking forward to begin testing the possibilities of AT&T Labs’ invention for customers and utility companies,” said Andre Fuetsch, president of AT&T Labs and chief technology officer.

“AT&T is focused on delivering a gigabit-per-second speed everywhere we can with our wired and wireless technologies. Project AirGig represents a key invention in our 5G Evolution approach. AT&T Labs is ‘writing the textbook’ for a new technology approach that has the potential to deliver benefits to utility companies and bring this multi-gigabit, low-cost internet connectivity anywhere there are power lines – big urban market, small rural town, globally.” 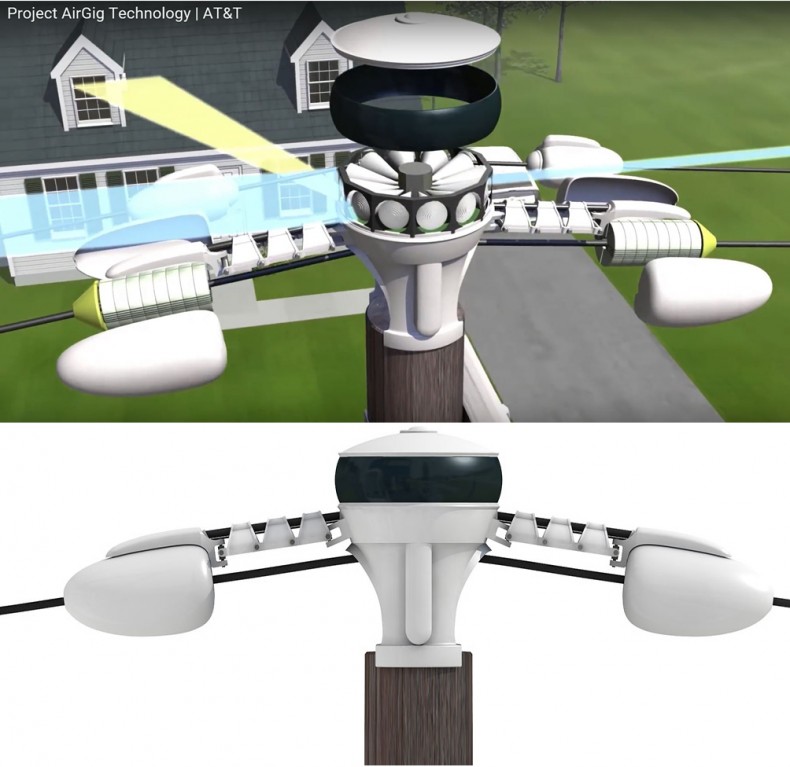 With the RDAS, AT&T Labs found a system design to effectively deliver not only wireless broadband, but also mobile traffic. The mmWave surface wave launchers and inductive power devices can power themselves without a direct electrical connection. These devices create a multi-gigabit signal that travels along or near the wire, not through it, as AT&T illustrates in this video. The signals will enable the delivery of wireless Gigabit services to people virtually everywhere. 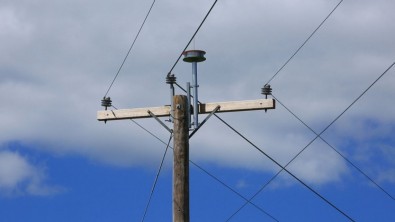 Future field trials will demonstrate how Project AirGig works to support power companies’ smart grid technologies, such as meter, appliance and usage control systems as well as providing early detection of power line integrity issues. Field trials will also evaluate the technology during inclement weather, such as rain, snow and high winds. The project focus is on more precisely determining the cost of deployment while maintaining the highest signal quality for the customer.

“We believe Project AirGig has the potential to quickly bring connectivity to all parts of the world. Our researchers are addressing the challenges that hampered similar approaches a decade ago, such as megabit per second speeds and high deployment costs,” said John Donovan, chief strategy officer and group president, Technology and Operations, AT&T.“Project AirGig is still very much in the experimentation phase.” “That said,” he continued, “I’m excited about what AT&T Labs’ engineers have developed to date. Our overall access approach, in conjunction with our software-defined network architecture, is unmatched in its ability to usher in connected experiences like augmented reality, virtual reality, self-driving cars, telemedicine and 4K mobile video. Big urban city. Small rural town. Around the world.”

You have to wonder what AT&T’s competitors are up to. At this moment, none have issued any official statements. Are they going to throw their hands up, walk away and give it all up to AT&T? Of course not.

The AirGig story by any name is just beginning. The obvious is clear – broadcast towers and high-power broadcast transmitters may not be forever necessary for broadcasters to broadcast.

Who would have thought last decade’s purge of “big iron” from TV studios and edit suites would grow to also obsolete the biggest of all iron in TV broadcasting--towers and transmitters? Broadcast engineers have disposed of literally tons of high-priced, once-valuable, big iron production gear such as DVEs and VTRs, replaced by faster off-the-shelf computers and servers that easily handle the bandwidth. Could high-power RF transmission systems next?

No matter how live content is delivered to viewers, its broadcasting (aka Show Biz), and its all about the brand. Many TV stations moved their channels to UHF DTV without changing their brand.