Gavin Kelly, a well-known “ghost hunter,” seeks to prove the existence of the paranormal by recoding strange sounds with his TASCAM DR-series field recorder for Amazon Prime’s new television series “Paranormal Journey: Into the Unknown.” Kelly, who serves as the host and lead investigator for the series and partner/cohost Paula Purcell, are known as the “Phantasmic Ghost Hunters.”

The TASCAM DR-701D, DR-100mkIII, and other DR-series recorders proved particularly well suited to the job. For each episode, Kelly and Purcell use audio and video to capture their explorations into paranormal phenomena. They claim to show the raw, uncut footage with no editing and no tricks.

“We were amazed at how well the TASCAM recorders can capture the unseen, the voices of the dead,” said Kelly. “They can pick up amazing things, especially in abandoned buildings. We use both the internal mics and mics we connect with cables. The DR-series recorders' internal mics are great. They pick up stuff our other field recorders can't.”

When ghost hunting, Kelly took advantage of the TASCAM recorders’ audio input meters for ambient light as well as to avoid input clipping. “We often work in quiet places, like abandoned buildings,” he said, “and when we see the signal level fluctuate, I point the camera at that area so we can get pictures of whatever could be causing the fluctuation. It's like a surveillance system for the supernatural.” 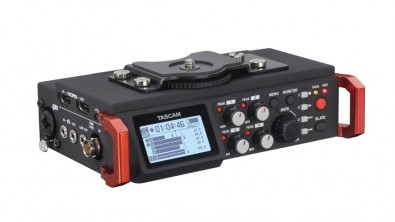 For example, when Kelly and Purcell were investigating an old U.S. Marine hospital, they placed a camera in the center of a hallway and mounted the TASCAM DR-701D under the camera and a TASCAM DR-10SG camera-mounted recorder with shotgun microphone on top.

“We ran cables from the DR-701D to mics in four rooms, while the camera shot straight down the hall,” Kelly said. “We then went downstairs to our base camp and watched from an infrared camera. If the recorder picks up something, the meters will flash. In this case, we were three floors down, with nobody else in the building, when the meters went to yellow and then red. We're still evaluating the audio, but we think we're on to something.”

Sometimes the mics' sensitivity results in false positives. “We investigated a place called the Campbell Club and used the TASCAM DR-100mkIII’s internal mics,” he said. “We were monitoring the live audio from the recorder, and at first it sounded like someone was hollering inside the house. Even the guy who let us into the club thought he heard something coming from the fourth floor. But after further evaluation we found out it was someone in a car driving by with the radio blasting-a block away! It wasn't the recording we were hoping for but it shows how sensitive the microphones are.”

In addition to the DR-701D, DR-100mkIII, and DR-10SG, the Phantasmic Ghost Hunters use a TASCAM DR-10L digital audio recorder with lavalier mic and a TASCAM DR-10X plug-on micro linear PCM recorder with XLR connection. The DR-10X, which is commonly used for interviewing and broadcast applications, attaches to a handheld microphone, capturing audio to a microSD card at 24-bit, 48 kHz Broadcast WAV resolution.

“The DR-10X is great for our interviews and walkthroughs; this way, we don't have to run mic cables down a boom pole to our recorder,” Kelly said. “And the DR-10L is just phenomenal! We used to have to record interviews from a lavalier mic using wireless, and we had RF interference problems and signals dropping out. With the DR-10L, the subject wears the lavalier, and it's wired to the recorder in their pocket. No wireless, no RF. With a slate, you can easily synchronize it in post.”