"Be The Player" enhancement 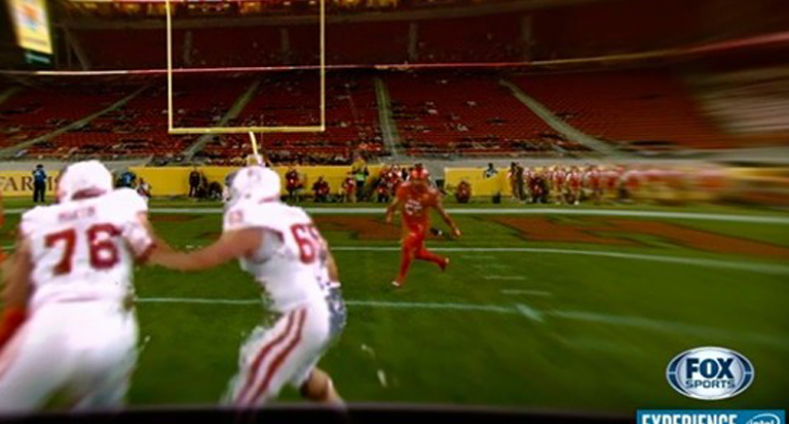 In its continuing efforts to use data to create immersive experiences, Fox Sports wants viewers to get inside the helmet of players during its live telecast of Super Bowl LI on February 5th, 2017. At least during replays, that is, which will allow the game announcers to analyze plays with more accuracy by freezing the action and scrubbing through different camera angles stitched together with computer processing from Intel Corp.

The new “Be the Player” replay enhancement was developed within the Fox Sports research & development lab, a quasi-secret initiative within the company that works with technology vendors and sponsors to develop new applications and enhancements for viewers of its live sports productions. During the Super Bowl, a dedicated production crew will employ a 360-view replay system provided by Intel Corp that gives viewers a first person, field-of-vision perspective never seen before. In December, the “Be the Player” system was tested during college football’s Fosters Farm Bowl and worked flawlessly.

The “Be the Player” replay displays a 360-degree POV perspective from any player on the field without the need for a camera to be placed on the player. It uses Intel’s 360 Replay technology, which uses a series of robotic PTZ cameras mounted around the stadium (the Super Bowl will be played at Discovery Green stadium in Houston this year).

“We tasked Intel to push their amazing Intel 360 Replay technology to the limit of what it could do, using their array of cameras circling the stadium to synthesize a player’s view on the field,” said Michael Davies, FOX Sports SVP of Field & Technical Operations. “The cameras, backed up by a huge bank of Intel computing power, allow a moment to be recreated in 3D space, so that a ‘virtual camera’ can be placed at the player’s eye line.”

The process, he said, is “not unlike how limitless camera views can be created in video games.” 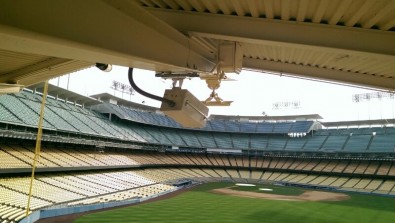 The Intel 360 Replay system uses high-resolution cameras mounted around a venue to allow viewers to see and experience sporting events from any angle.

Davies called seeing and breaking down the play from the player’s point of view the “undiscovered country of sports broadcasting. This broadcast enhancement is like no other—it literally brings the audience down to the viewpoint of the player at the critical decision-making moment. It all looks much different from field level, and can assist our announcers in describing what actually happened on the field.”

“We, as broadcasters, are always trying to provide the viewer with something they’ve never seen before,” said Zac Fields, FOX Sports SVP of Graphic Technology and Innovation. “With this new ‘Be the Player’ technology, it is now achievable and we are incredibly excited to debut this at the Super Bowl on FOX.”

Previously known as “freeD,” the Intel 360 Replay system was invented by a small Israeli company called Replay Technologies, which was bought by Intel in March of 2016. Optimized for the latest generation of Intel Core processors and Intel server technology, the Intel 360 Replay system creates a seamless 3-D video rendering of the action using twenty-eight 4K cameras positioned around the stadium and connected to Intel-based servers. Previous to its acquisition of the company, Intel had collaborated with Replay Technologies since 2013 to optimize their interactive, immersive video content on Intel platforms.

Intel CEO Brian Krzanich has publically stated that the company is especially excited about how data is re-inventing the way people consume and interact with sports media. It is one aspect of what he calls the “digitization of sports.”

In addition, Fox Sports teamed with GoPro in November to offer a first-ever POV camera view from the hat of referees working the Big Ten Championship Game.