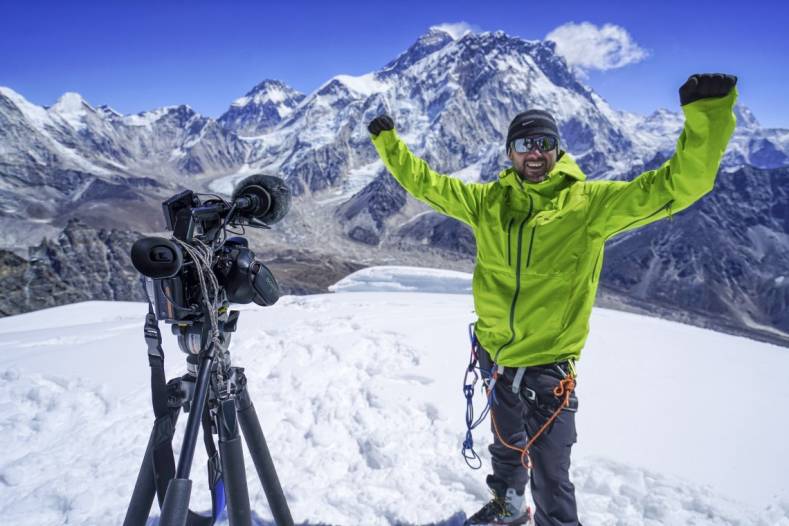 For most DOPs shooting in the cold brings its challenges but when the cold comes hand in hand with climbing a mountain in the Himalayas, that’s a whole different ballgame according to Sydney-based cinematographer Tim Hawkins. Chosen to shoot the the Sherpas of the Himalayas for Network Ten TV Series Body Hack meant taking a full crew to 6000 metres. 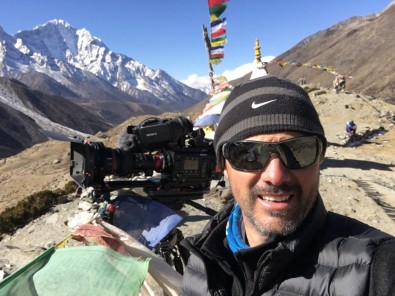 Todd Samson is an adventurer, documentary-maker, television presenter and businessman. He co-writes, produces and hosts Discovery science series, Bodyhack. Using science as his guide, he explores how some of the world’s most extraordinary people live, what they do differently from the rest of us and what we can all learn from them. He doesn’t just observe them, he hacks into their world and tries to become them.

For the episode on the Sherpas of the Himalayas that meant scaling the world’s most difficult trekking peak, Lobuche East, which sits just below Mount Everest’s peak at 6200 metres.

Sydney-based cinematographer Tim Hawkins was asked if I’d be willing to shoot the Sherpa episode. Hawkins explained, “I’ve been a Sony F5 owner for almost two years and a Sony user my whole career. Of all the Sony cameras I’ve owned the F5 is most definitely the one that has revolutionised my shooting style. Put simply I love the F5 and the pictures it produces, I knew it was the perfect camera for the job.”

Hawkins was told it would be a challenging shoot on many levels namely personally, professionally and logistically. He continued, “It was mentioned that, as with any high altitude mountain shoot, there is a fair chance the crew may become a part of the story! The executive producer then went on to that the trek would take 17 days and feature a push to the summit where the crew would ascend 1100 metres in a single day in extremely difficult climbing locations.

Hawkins added, “After accepting the role I started thinking about the camera. I really wanted to shoot the episode with my F5 and cine lenses but had concerns with how it might function at extreme altitude, something every cameraman has to consider when shooting in the Himalayas. I also had to take into account how the F5 would handle the dust and dirt below the snow line and what would it do above that snow line in minus 20-degree temperatures. All relevant questions that needed answering.”

Hawkins continued, “I was determined to give the episode a cinematic feel so large sensors were the only option for me. Our director, Jeff Siberry, agreed. We discussed cameras and lenses at length. He was a Sony FS5 fan and reckoned it would be a good choice for run and gun. I knew the A7S well and reckon it’s the best second camera or gimbal camera going but the FS5 was new to me. Jeff was happy enough to make the FS5 the main camera but I wasn’t convinced and wanted the F5 on the shoot. On paper the FS5 looked bloody good though - large sensor, S-Log, built in variable ND, high frame rates and small size but I still had my concerns as I knew what the F5 was capable of.” 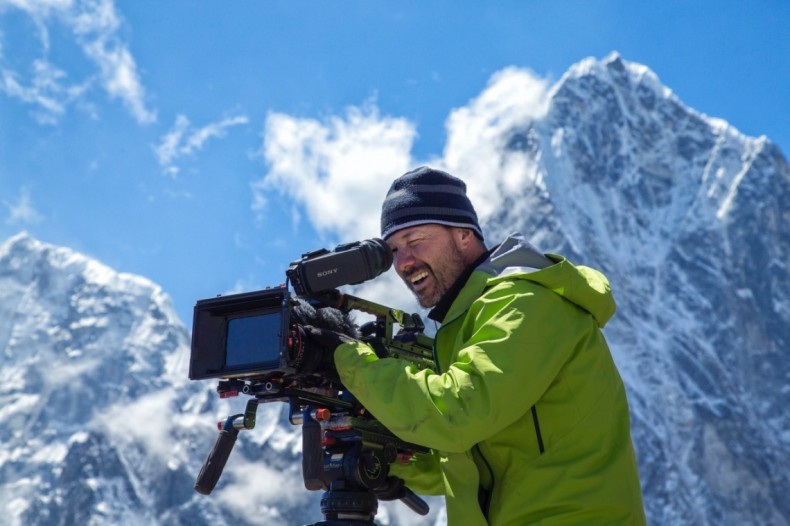 "I changed my Matte box ND filters a thousand times to get correct exposure. It was a tough challenge I’d set myself but I was committed to keeping the EI ISO at 2000 while shooting with the lens open," said Hawkins

After some debate and test shoots Hawkins and Siberry decided to use all three Sony cameras. The decision was made to travel with the F5 as the main camera and use it as much as possible whilst using the FS5 as a run and gun camera and potentially the camera they would summit with. The A7S would be used by Siberry to shoot additional elements.

Hawkins added, “The logistics were complex. Apart from my three Sony cameras and multiple lenses, we traveled with a Freefly Movi M5 gimbal, two Miller Solo tripods, two LED light panels, two MacBook Pros, five GoPros, a little 1m slider and a drone. It felt like a lot of kit for an expedition but I just couldn’t lose anything without losing production value.”

Feeling fit and with everything packed into backpacks Hawkins, Siberry and the crew set off for their 28-day journey to Nepal and Louche East.

Hawkins commented, “Where a lot of our shooting style was run and gun and the FS5 was used, but in truth most of the content below 5000 metres was shot on the F5. Shooting in Cine EI mode on Cine S-Log 3 using the LC-709Type A LUT we shot a lot of off-speed and I used the interval record mode to shoot all of the time lapses. I decided before leaving that I would try not to move the ISO EI rating off as I didn’t want to create any confusion with the new clients in post-production. In other words I wanted them to also apply the same LUT and have correctly exposed pictures from the get go.”

Hawkins wondered if any Sony F5 had ever ventured to this extreme altitude adding, “Ultimately it was the last stop for the F5. We did shoot some scenes with it up there and it didn’t miss a beat. It powered on and to my surprise the batteries even held charge. The FS5 would be the main camera from now on but I had a big worry about its usability in the rough conditions.

Summit day proved to be far more difficult than Hawkins imagined both personally and professionally as he concluded, “For me, it was quite a challenging technical climb and after cramp-on-point I was a broken man on a hill at extreme altitude and had no right to be shooting. I really had a rough time. With all the different kit I was carrying 17kg in my backpack which wasn’t the smartest decision and to be honest camera work was not at the forefront of my mind on summit day, survival was. In truth, I couldn’t operate well. It was a point and shoot situation. The camera performed really well in full auto mode and my fear about battery life was unfounded as I didn’t even burn through one battery all day. As it turned out the pictures from the FS5 looked great. I used the zoom and everything was in focus. We summited a little after 10am and after an exhausting eight hours. As an experienced DOP, it’s hard for me to admit this but a servo zoom and facial recognition auto focus on a Sony FS5 really saved my bacon. I must say hats off to both the F5 and FS5 as when push came to shove under the harshest conditions I’ve ever shot in both performed brilliantly and neither skipped a beat.”