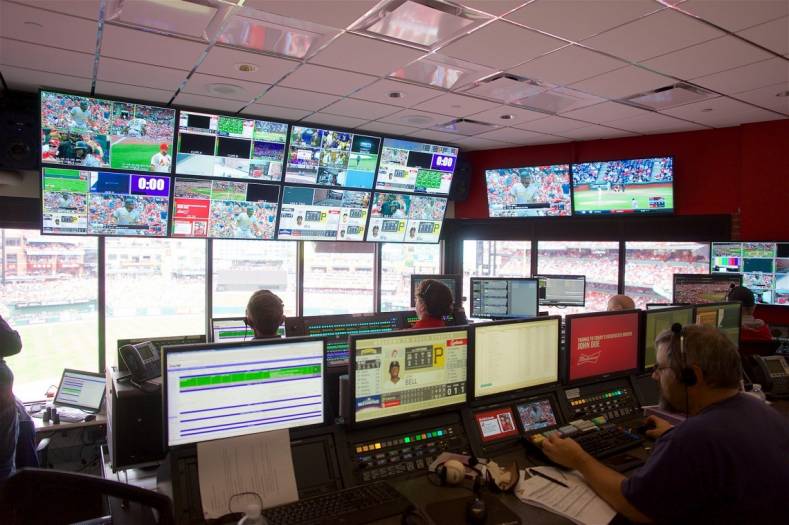 Fans at a ball park expect as much excitement on the big display screens as on the field, and EVS is helping Busch Stadium bring it to them.

Going to the ‘ol ball park has become a multimedia experience for today’s fans and Busch Stadium, home of the St. Louis Cardinals Major League Baseball (MLB) team, is determined to give ticketholders their money’s worth.

“Busch Stadium is a great example of a venue wanting to further their fan engagement by the way they produce content,” James Stellpflug, vp product marketing at EVS told The Broadcast Bridge. “Up to a couple of years ago they didn’t even have slo mo replay so they were doing the best they could by playing back at variable speeds from an Avid Media Composer system.”

But then a year ago they installed their first EVS server, the six channel XT3 4U. Then at the beginning of this year they underwent a major upgrade adding 8 channel XT3 production servers that feature SD/HD, 1080p or 4K configuration.

This not only greatly increased the material they could display on the stadium’s giant Daktronics screen, the second 6 rack unit let them record super slo mo from the Grass Valley LDX 86 cameras in the Fox Sports Midwest production truck parked behind the stadium, and gave them more flexibility for integrating their Avid Media Composer.

“They also added two EVS IPDirector content management suites to import/export clips and build highlights,” Stellpflug said. “This lets them show more replays and packages on the stadium’s big screen that would have otherwise have been reserved for the TV broadcast production, and since the content moves natively into the Avid NLE they can edit together more elaborate stories for game time playback and subsequent use.”

“When this stadium was built in 2006, the scoreboard and video production facility was fairly rudimentary,” Wilson began . “But every 10 years, Major League Baseball’s revenue sharing policy provides funds that can be used for stadium improvements so in 2016 we put a lot of it into our video LED boards and control room facilities.”

Now their EVS XT3 servers not only feed material to the stadium’s 8 Avid edit bays as well as their Avid ISIS shared storage system.

“Today we are doing all the video work needed by the Cardinals in-house,” Wilson said. “This includes a TV show, all our TV advertising, radio spots, social media packages, videos for school programs and our Hall of Fame. We basically work as our own production agency.”

It’s because of this workload that Wilson was adamant about choosing EVS for their servers.

“You can’t compare the interface between EVS and the Avid systems with anyone else,” he said. “In fact, the EVS digitizes better than the Avid does, which is important for our archiving project. We looked at other replay servers, but none could do the job as well.”