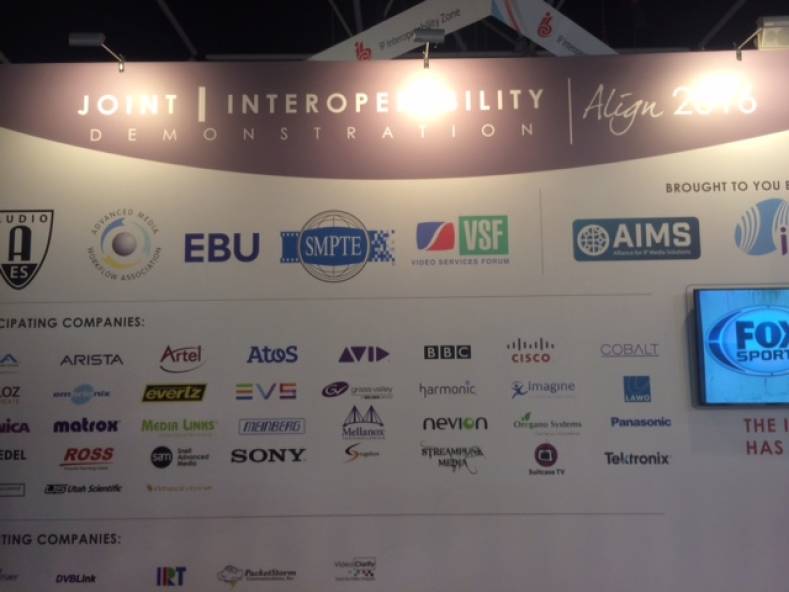 Fifty-four companies promoted their participation in the AIMS initiative; an alliance that has grown quickly.

Ingesting, transcoding, editing and delivering audio and video files over an Internet Protocol (IP) infrastructure dominated the talk among both customers and vendors at the recent IBC show. The next generation of television production and distribution solutions are being pitched based on Ethernet, not SDI connectivity. By moving to an IP infrastructure, many vendors suggest that IP solutions will give production and distribution facilities more flexibility in how resources are allocated and shared both within the studio and to any point on the globe.

The variety of IBC 2016 technical papers and panels on the topic also provided insight into many of the technical challenges still yet to be resolved industry wide. These include audio-video latency, packet-based transport stream monitoring, and equipment interoperability.

“If the industry is just looking to replace an SDI cable with a smaller Ethernet cable, I say what’s the point really,” said Shawn Carnahan, CTO at Telestream, a company that supplies file transcoding technology to both professionals and consumers. “There’s an entire ecosystem of equipment that has to work in a standardized way or we’ll end up with a bunch of islands and no coherent workflow that makes any sense. But you will have smaller cable bundles.”

Standardization was another hot IP topic, as companies begin to develop their IP strategies across their product lines. But several vendors were quick to state that this new IP transition was not just about selling new equipment, but finding a new and efficient way for broadcasters to make the most of their existing resources (cameras, switchers, servers) while also supporting an increasing number of distribution platforms and higher resolution data files.

To this end, it was announced by Imagine Communications that the Alliance For IP Media Solutions (AIMS), a group of 54 companies that have joined together endorsing IP technology, requires members to  follow a well-laid out roadmap that includes established standards from organizations like SMPTE (2022-5/6), AES (AES67), AVS Forum, EBU, AMWA, IABM, and others.

“The Alliance for IP Media Solutions believes the AIMS Roadmap is the best approach to position the broadcast industry to flexibly and economically deploy services regardless of format or distribution method. As such, each Member agrees to publically endorse the AIMS Roadmap supported by the Alliance for IP Media Solutions as the preferred IP interoperability roadmap for the broadcast industry.” 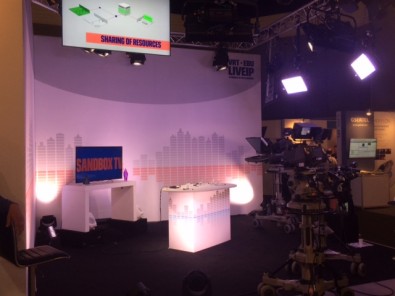 The story goes that AIMS was founded in April of 2015, when Imagine’s CEO Charlie Vogt was having coffee with a competitor's CEO and the two got to talking about IP incompatibility issues among the industry major equipment suppliers. Their respective customers (Imagine alone claims 25 full IP-based installations) needed assurances that all of the equipment in a file-based video production/delivery chain would work seamlessly together, not just the equipment their two companies made but technology across the industry.

The AIMS roadmap was “finalized” in December of 2015 and in less than a year dozens of companies have jumped on board. AIMS is not a standards body but a group of equipment companies that all have a vested interest in seeing that the transition to IP happens as quickly as possible.

“We came to a realization that we could not do this alone,” Vogt said, adding that executives from competitor Grass Valley and IP audio and video technology provider Lawo were called first to get the ball rolling. Snell Advanced Media (SAM) soon became a fourth founder.

“We need all of our competitors to participate for the benefit of all of our customers,” said Tim Felstead, Head of Product Marketing for SAM. “We’re promoting already established, or soon to be established, standards. We’re not creating our own standard and making everyone comply with it. That’s been tried before (e.g., the Material eXchange Format, or MXF) but, despite good intentions, it didn't get the industry where it needed to go.”

MXF was positioned as a universal way to sore and deliver audio and video data inside IP packets. The problem was that many vendors devised their own ways of wrapping those packets and thus third-party equipment could not work with it, defeating the original interoperability intent.

AIMS proponents say this time it’s different because there’s a strong will among customers to streamline their multi-platform workflows and make them more manageable with a small staff. However, they are still skeptical about committing all of their assets to an IP infrastructure when baseband SDI has served them so well for decades. 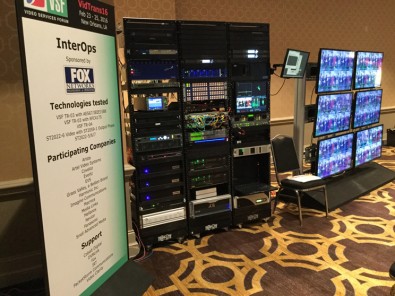 In addition to IBC, The Video Services Forum has hosted periodic “InterOp” demonstrations with participation from a growing number of vendors.

The Video Services Forum—an independent organization comprised of service providers, users and manufacturers dedicated to interoperability and quality metrics for video networking technologies—has led the way in educating the industry on matters of IP delivery. From the VSF, specs like TR03 and TR04 describe how video audio and data can be inserted separately or in different combinations within packets. These specs will move to SMPTE for voting on standardization (SMPTE ST-2110).

VSF has been hosting periodic “InterOp” demonstrations (the most recent in February in New Orleans, sponsored by Fox Networks), which are attended by several manufacturers. The participants set up and interconnect their equipment to prove it all works together. This third-party testing lends credibility to what AIMS is trying to accomplish.

“We can't have a lot of different standards or ways of working, it confuses customers,” said Andreas Hilmer, Director of Marketing & Communications For Lawo. “AIMS helps our customers feel secure that the equipment from different companies will work together and that their investments are safe. It’s like a seal of compliance.”

Another “real-world” example of a pure IP studio production was staged at the IBC Show by Belgian broadcaster VRT in partnership with the EBU. In January of this year VRT began building a news studio in Brussels (in anticipation of a move to larger facilities in 2017). During this past summer, the broadcaster went on-air live from that studio with its KetNet childrens’ network in an IBC LiveIP Project codenamed “Sandbox.” Protocols in use include SMPTE 2022-6 (video), AES67 (audio) and PTP (synchronization). 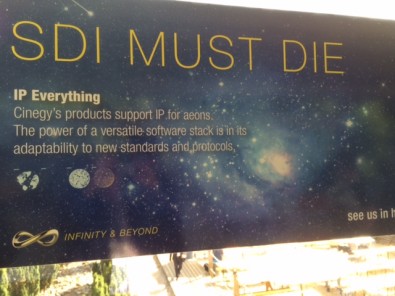 At IBC several companies were promoting the demise of SDI infrastructures, but not everyone is quick to predict its death.

“When you move to IP, your daily production world changes in profound ways, “ said Karel De Bondt, LiveIP Project Manager at VRT. He added that multimode fiber cabling is also employed, under Cat-5/6 control. “The flexibility is such that I can change an entire studio configuration with a push of a button. One single Cat-5 cable replaces the huge bundle of SDI cable we are used to working with. This project has gone so well, that we are considering using the all-IP studio for other shows next year. IP production is real and we're doing it today.”

There’s no denying the transition to full IP infrastructures will not happen overnight. Even Imagine’s Vogt predicted that it would take until at least the year 2025 before his company would be selling more IP-based technology than baseband SDI; a reverse of today.

“The entire industry has to be behind this initiative for it to be successful,” Vogt said.

With AIMS, he’s got partners and competitors alike all moving in the same direction. This will speed up technology development and foster compatibility among third parties.

“We’re on the cusp of the next generation of television, “said Patrick Harshman, CEO of Harmonic, which recently announced its involvement with AIMS. “For us as a company, the time was right to get involved (in AIMS). We feel the industry is ready and the time is now.”