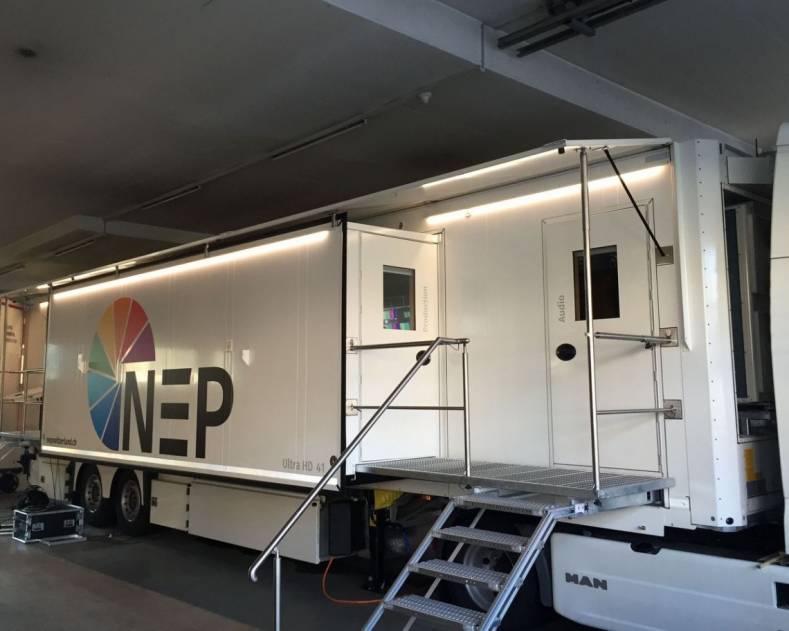 The Swiss Super League football season got underway last weekend, with TV coverage in Ultra High Definition (UHD). Facilities for the 4k broadcasts were provided by NEP Switzerland, which recently took delivery of a new OB truck based on the technology designed and engineered by systems integrator Broadcast Solutions.

The new Ultra HD-41 vehicle is from Broadcast Solutions' Streamline range of production trucks and was produced on a tight schedule in time for the start of the 2016-17 Super League season on 23 and 24 July. The Streamline S12 is 14 metres long (excluding the tractor) and expands to 3.75 metres wide when in use.

The Streamline family of OB vehicles comprises five models, all of which offer 4k and are designed to be 'off-the-shelf''. NEP Switzerland's S12 4k is able to accommodate a total of 12 cameras, including ten Panasonic AK-UC 3000s and selected super slo-mo or mini-cams. The production areas can house up to 20 operators, with the ability for people to use different workstations easily due to a KVM (keyboard, video, mouse) arrangement.

"The Streamline S12 4k is very flexible in a lot of ways," comments Trond Hermansen, chief technology officer of NEP Switzerland. "We can easily adapt different set-ups and change positions within the OB. The sophisticated KVM system makes it easy to change the working positions. This all leads to fast set-up times, which is an important factor for the company." Equipment includes a Grass Valley Karrera 8 M/E video switcher featuring a standard K-Frame producing 12 UHD outs. The video router is an Imagine Communications Platinum 256x328, connecting to a series of EVS servers, including four XT4ks, two Epsio Paints and one XFile 3. Monitors are a mixture of of NEC and Sony, with control through a VSM system, which incorporates tally functions. Multiviewers are Imagine Platinum SX pro 144x21 heads.

Hermansen says a feature of the truck is its "powerful" audio section, based on a Lawo matrix and mixing console. These are the Nova 73 compact 5120x5120 router and a 48-fader mc² 56 mixer. "This puts us in the position to cover sports and entertainment events with the same high professional outcome," Hermansen comments.

The audio-video core is based on a Riedel MicroN processor, with intercom connectivity provided by a Riedel Artist 128 and MediorNet Stagebox matrix system, with Riedel Riface and Motorola wireless units.

Commenting on the Streamline S12 4k, Broadcast Solutions' chief technology officer Rainer Kampe said, "it is the next logical step for our Streamline OB truck family. We can build and deliver the 4k versoins within the same short time-frame and with the same cost-advantages. Moreover, using the new room layout gives more space in the production area. The focus on a sophisticated audio section, KVM and control system makes the OB very flexible in terms of its use. The audio-video core processing system opens up possibilities to scale for future IP workflows."