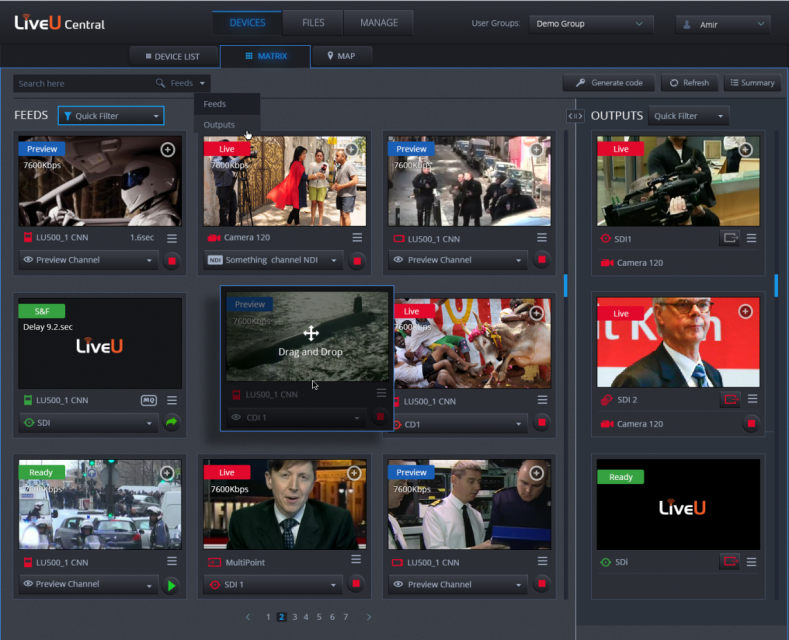 An improved Matrix management workflow from LiveU at IBC.

​LiveU is promising a major product launch at IBC but in the mean time is only previewing LiveU Solo, its plug-and-play live streaming bonded solution for the online media market; and a new release of its management software.

LiveU Solo allows users to livestream into any web streaming workflow by connecting automatically to popular OVPs and content delivery networks such as Facebook, YouTube Live and Wowza Streaming Cloud. IBC sees the European launch of this product.

The company also showcases its new LU710 4K/p60 HEVC rack-mountable 1U encoder. This combines LiveU’s external antenna with six modems, delivering video rates of up to 40 Mbps; and a server with 4K output and is said to transform any SNG truck into a fully mobile hybrid cellular/satellite solution for transmitting 4K/HD video with improved efficiency.

LiveU will be presenting Version 6.0, a major software release for its full range of portable transmission and management solutions.

In addition, this release includes a better version of MultiPoint, LiveU’s internal and cross-organisational professional video distribution service, which enables the sharing of high-quality live video between multiple broadcast facilities over the internet.

V6.0 also includes a software upgrade feature which allows customers to upgrade their LiveU units and servers to new versions and fully manage the process themselves.