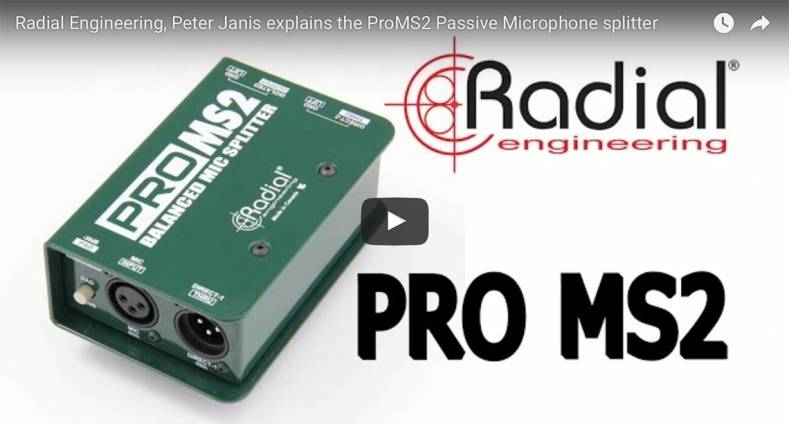 At first glance, you may think of Radial Engineering as a music gear company. But they make an exceptional range of professional products for the entire audio industry.

Sometimes a company is so identified with a specific market that we don’t think of it when considering products for broader technical applications. That happened to me with Radial Engineering, the firm based in Vancouver, British Columbia, Canada. I so associated their electronics with music products that I didn’t realize they also make some of the best problem solvers for all pro audio applications.

In the world of sound recording, virtually everyone occasionally needs to split a microphone for sending the audio to two or more locations. It usually happens when a house sound system has one microphone and you need also feed audio for a video or sound recording.

However, as any professional knows, there is a certain risk to doing this. That risk is inducing hum. This can easily happen when using cheap $35 mic splitters that are found everywhere. 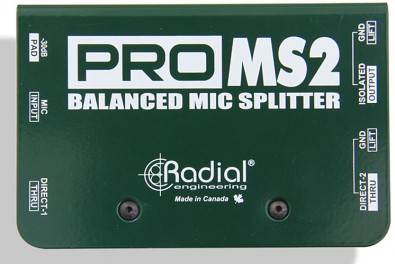 It happened to me — which set me on a search for a higher quality, more reliable, more professional-quality mic splitter product. My search took me to Radial Engineering, where I was introduced to a range of products that are not only built like a tank, but have the highest quality internal components. And the prices were surprisingly affordable.

The range of audio problem solvers that Radial manufactures and sells is staggering. My first Radial product was their ProMS2 Passive Microphone Splitter, an entry level product that costs $119.00. It uses an Eclipse ET-MS10 transformer for the signal transfer and is equipped with direct, isolated and auxiliary outputs for a three-way split.

I figured I was getting a decent quality mic splitter. When I first got the little green box, I couldn’t believe the weight — over a pound and a half! It is made of rugged 14-gauge steel for durability and shielding.

The splitter accepts a balanced microphone or DI signal and sends it to three outputs simultaneously. As a passive device, there is no need for power – you merely plug in the cables and the ProMS2 automatically delivers audio without artifact or color.

Outside of being built extraordinarily well built, the secret is the Eclipse transformer, which features a nickel-laminated core that delivers a wide frequency response and exceptional signal handling with virtually zero distortion at all frequencies.

With better than 115dB of common mode noise rejection, users can be assured that hum and buzz caused by ground loops and stray DC currents are kept at a minimum.

To shield against stray magnetic fields, the transformer is doubly protected with an integral MuMETAL can within the external steel enclosure. This is augmented with RF filtering and a 100 percent discrete signal path to ensure optimal signal flow.

As with all Radial products, the construction begins with a rugged 14-gauge steel case. A book-end design creates a recessed zone around the switches and connectors to protect against the harsh environment of frequent use. An internal I-beam frame makes it virtually impossible to torque the PC board which could otherwise compromise the sensitive solder joints.

The design has the advantage of allowing up to eight units to be rack-mounted using the Radial J-Rak. Typical applications include splitting a signal in a studio to feed more than one preamp, feeding a microphone to more than one mixing console or even splitting the signal from a live performance to supply a broadcast feed.

If I were in a critical studio environment, I could also get Radial’s JS2 and JS3 splitters, which use Jenson transformers for even higher performance. But mic splitters are just the tip of the Radial iceberg. This company makes just about any pro audio device you can imagine.

From its new Catapult Cat 5 audio snake to its press audio distribution system, this company has it all — and its built to amazing standards. They have mic preamps, mic selectors, Bluetooth interfaces, direct boxes, computer DIs and a dozens of musical instrument interfaces and accessories. Check out their extensive catalog. This is serious pro-level audio gear.