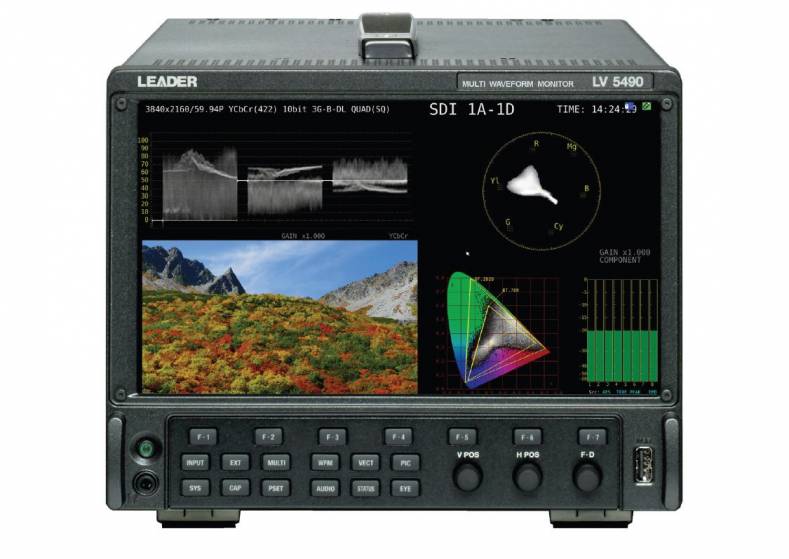 New LV 5490 upgrades and options were stars in the Leader 2016 NAB Show exhibit.

HDR could be the next major innovation for television broadcasting ahead of the mainstream adoption of 4K/UHD. Leader Instruments Corporation made several announcements and product introductions related to both at the 2016 NAB Show, and joined the TICO Alliance.

High dynamic range (HDR) was one of the hottest topics across the 2016 NAB Show and in the Leader Instruments Corporation exhibit. Leader’s launch of a CINEZONE-HDR option for the LV5490 4K/HD/SD makes it one of the first test instruments allowing broadcasters and production companies to measure HDR while ensuring standard dynamic range (SDR) viewers are not compromised.

The 4K software upgradable version of the LV5490 positions it to become the standard test and measurement waveform monitor for the entire broadcast industry.

The company also announced LV5490SER06, a 12G UHD-SDI interface option with eye-pattern monitoring and jitter measurement for the LV5490 UHDTV waveform monitor. UHD-SDI is the only standardized broadcast UHDTV interface.

The LV5490 waveform monitor helps ensure productions are correctly acquiring HDR content, that editors and color grading facilities are delivering the full impact of HDR, and that transmission facilities are broadcasting HDR legally. 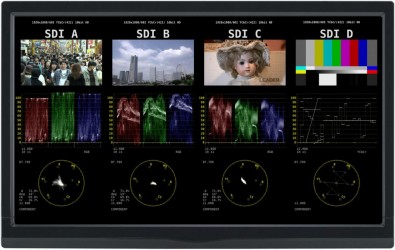 Leader introduced a software upgrade allowing the LV7390 rasterizer to be used in 4K/UHD production.

The Leader LV7390 is a 3G/HD/SD-SDI rasterizer is designed to monitor up to four sources at the same time. Compatible with 3G/HD/SD-SDI, and now optionally 4K, the unit can also monitor up to eight channels of embedded audio as standard.

It incorporates full-resolution 3G/HD-SDI and DVI-I rasterized outputs which allow detailed video and audio measurements to be checked on a separate monitor in full 1920 x 1080 HD resolution. The LV7390 can also be controlled remotely using a USB mouse.

Test patterns include 100% and 75% color bars, multi-format color bars and SDI check fields with user-selectable scrolling in eight combinations of up/down/left/right. Scrolling speed is user adjustable from 1 to 256 pixels or lines. Y/G, Cb/B, Cr/R components can be turned on or off independently for each output channel.

QVGA (320 pixel x 240 line) 24-bit full color bitmap logos can be transferred into the generator via USB memory and added to any test pattern. The LT4610 can also generate IDs of up to 20 characters, and generate safety area markers to show safe-action area (90%), safe-title area (80%) and/or 4:3 aspect ratio.

The unit also generates several audio test signals. Test patterns with synchronized audio can be generated for lip sync testing. The audio click setting is disabled in this mode. SDI output 1 is synchronized to the AES/EBU output. When using Leader’s LV5770A waveform monitor users can accurately measure the lip sync of SDI video and audio signals.

The LT4610 has a genlock input and can be synchronized with NTSC/PAL black burst or HD tri-level sync signals. Standard support for SNMP via Ethernet makes it easy to integrate the LT4610 into a network environment. Alarms are generated with SNMP and displayed on the front panel.

"NAB 2016 attracted over 100,000 registered attendees from nearly 187 countries," comments Masahiro (Hiro) Sawa, president of California-based Leader Instruments Corporation."It was our busiest Las Vegas NAB for many years. We were especially pleased to see a significant increase in the number of European visitors following the establishment of the new Leader Europe operation. Our engineers have correctly anticipated the requirements of broadcasters and brought a fantastic range of new products to market ahead of the competition."