At the recent 2016 NAB Show, Teradek demonstrated wireless video devices for remote video capture, camera control, real-time monitoring, color correction and webcasting. All were designed and manufactured in the USA.

The company also introduced several new products, including some new COLR solutions. COLR is a real-time LUT box, camera control bridge, and HDMI/SDI cross-converter in one tiny package. COLR integrates with Pomfort LiveGrade Pro, allowing DITs and colorists to give everyone the right look. 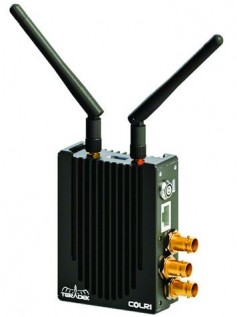 The COLR duo is an upgrade to the original COLR solution with a second 3G-SDI output.

COLR integrates with Pomfort LiveGrade Pro, giving you fine control of your looks over Wi-Fi, Ethernet, or via USB. Looks can be saved directly to COLR, and LiveGrade supports multiple simultaneous devices. COLR supports nearly every camera signal on the market, from GoPro to ALEXA. RAW or LOG signals can be converted for monitoring, and every camera's look can be synced to show directors their vision while shooting. COLR also enables wireless camera control for Ethernet-enabled cameras, including FoolControl for Red Digital Cinema cameras and ARRI packages.

COLR duo has all the functionality of the original COLR with a second 3G-SDI output, allowing a unique 33-point 3D LUT and CDL or 1D LUT to be applied to each output. 3G-SDI in / 2x 3G-SDI out. Gigabit Ethernet and USB ports for Camera Control and auxiliary power, 802.11ac WiFi.

COLR pro is the world’s first 4K real-time color grading system. It supports two simultaneous 12G-SDI inputs and up to four 12G-SDI outputs, with 2 independently applied 33-point 3D LUTs with a CDL or 1D LUT. Designed to be mounted in a rack or on a DIT cart, the unit has 2x 12G-SDI + HDMI in / 4x 12G-SDI + HDMI out, and Gigabit Ethernet for network connectivity. 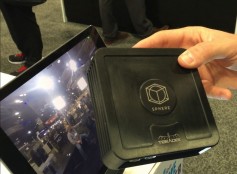 Frame from the live Sphere demo. 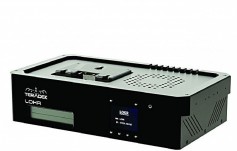 LOKR is central to the digital cinema workflow, providing a single hub for dailies, iOS and Android monitoring, and proxy recording.

With multiple USB 3.0 and 3G-SDI inputs, LOKR can ingest Teradek Bolt video feeds for real-time distribution to anyone on set with an iPad or smartphone. All metadata from Bolt feeds are automatically passed through to LOKR for crew for reference. LOKR's iOS application enhances on-set collaboration by allowing users to review and annotate directly on each recorded take.

LOKR's removable SSDs store each recorded take as a MP4 file, perfect for use as dailies. Each recording contains all of the metadata, color management, notes, and tags the production made while on set.