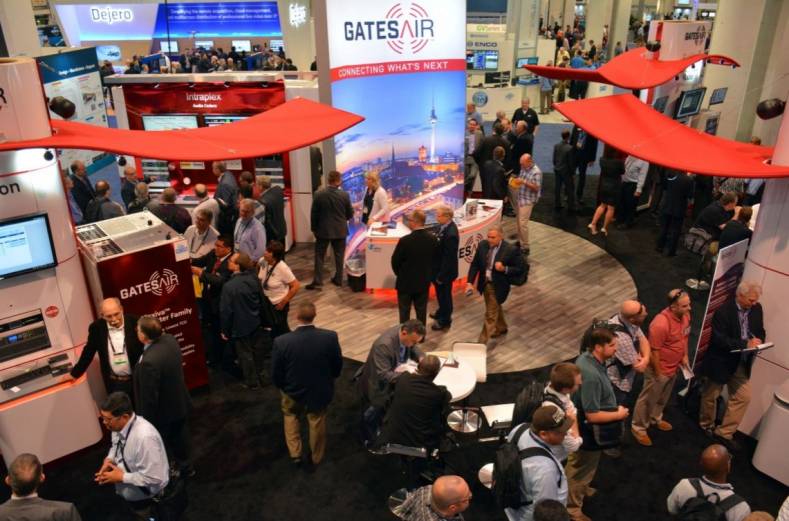 The GatesAir exhibit was busy and not the only place GatesAir products could be seen at the show. Photos courtesy Keith Adams at GatesAir.

Nearly 10 years ago, GatesAir’s innovations in RF plant efficiency made a particularly big leap with the integration of 50-volt LDMOS technology in its PowerSmart transmitter architecture. The latest big leap was three years ago via PowerSmart 3D. Powered by true broadband amplification, PowerSmart 3D can increase AC to RF efficiencies for ATSC operations from nearly 30 percent to approximately 40 percent, and reduced power consumption by up to 50 percent. 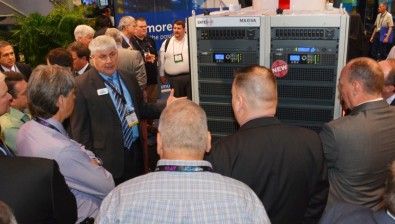 Exhibit visitors asked many questions about the FCC Repack and ATSC 3.0.

The next-generation of GatesAir’s PowerSmart innovations, PowerSmart Plus, was unveiled at the show. Designed for the green economy, PowerSmart Plus can raise AC to RF efficiencies up to industry-high levels of 50 percent ATSC. At this level, GatesAir Maxiva ULXT liquid-cooled and UAXT air-cooled TV UHF transmitters can operate with 20 percent more efficiency than the leading competitive offerings; and 170 percent more than legacy air-cooled UHF transmitters in operation today, without performance compromises.

Further boosting performance is Maxiva StreamAssure, a first-of-its-kind QoS and QoE solution for the RF plant. Based on software from cloud monitoring visionary Qligent, StreamAssure gives broadcasters a way to visualize multiple transport layers and streams coming in and out of the transmitter, giving users a clear picture of signal quality and compliance from the time it leaves the studio. Scalable from single transmitter deployments to large-scale, national over-the-air networks, StreamAssure is built to help RF engineers quickly identify and address the source of the problem, which more often than not originates outside the transmitter. The end benefit is improved visibility and quality control across the air chain.

The result from a GatesAir and Burk Technology relationship announced before the show, GatesAir demonstrated SNMP over IP Path for richer RF monitoring. The software-defined integration simplifies connectivity to TV and radio transmitters and increases visibility into performance and parameters.