Virtual Reality, in its various forms, was a hot topic at the 2016 NAB show. But all immersive technology is just that — a technology. It will ultimately succeed or fail based on whether it is used to tell compelling stories that viewers want to watch.

Only a few years ago, 3D video was going to be the next big thing. The technology, however, got ahead of its reason for being. In the end, it failed. Now VR is in the “wow” stage. Its staying power is still to be determined.

Before going any further, it might be wise to define what exactly is virtual reality, or “VR” — since it means different things to different people.

It can be immersive multimedia or computer-simulated reality. It uses multiple cameras and microphones to capture a wide expanse of space and to replicate an environment — whether real or imagined. When done well it creates a sensory experience, which can include the touch, feel and sound of a different place.

Most VR today is displayed on a computer screen or viewed with special head-mounted goggles. The immersive video is often accompanied by sound that follows the action of the content — usually through headphones.

For news, concerts and other live events, VR becomes an immersive viewing experience. For games, training, medical or military applications, VR can use advanced haptic systems that include tactile information, generally known as force feedback.

The immersive environment can be similar to the real world in order to create a lifelike experience — giving the viewer a more realistic view of a war zone, for example, or an alternative fictionalized space for video gaming.

Contrary to what many think today, virtual reality is not a new concept. It dates back to 1938 when Antonin Artaud described the illusory nature of characters and objects in the theatre as "la réalité virtuelle" in a collection of essays. The English translation of his book, published in 1958 as The Theater and its Double, is the earliest published use of the term “virtual reality.”

The term "artificial reality,” coined by Myron Krueger, came into use in the 1970s. The term “Virtual Reality" was used in The Judas Mandala, a 1982 science fiction novel by Damien Broderick.

The current VR trend began in 2007 with Google’s Street View, a service that shows panoramic views of roads, indoor buildings and rural areas. It also features a stereoscopic 3D mode, introduced in 2010. 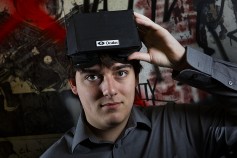 That same year, Palmer Luckey, who later went on to found Oculus VR, designed the first prototype of the Oculus Rift viewer. This prototype viewer displayed only 2D images and was noticeably cumbersome to wear.

However, it had a 90-degree field of vision that had been unseen anywhere previously. Luckey’s design would later serve as a basis from which the later designs emerged.

In 2014, Facebook purchased the company that made Oculus VR headsets for $2 billion. Sony jumped in with a virtual reality headset for its PlayStation. Google announced Cardboard, a do-it-yourself stereoscopic viewer for smartphones. The race was on and the market exploded.

News organizations, including the New York Times, have been experimenting with VR as a better way to communicate news stories. Gannett Company’s USA Today network is about to launch a news program in all virtual reality.

Called VRtually There, Gannett said it will be “the first branded news experience presented in VR” and will feature segments on a variety of topics, including politics, sports, finance and technology. 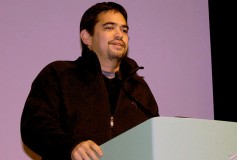 Niko Chauls, the network's director of applied technologies, noted that the VR technology “provides for a level of immersion and experiential storytelling like nothing else.”

In addition to news, VR has an almost endless number of possible applications. Gaming is a major use, as is fine arts, museums, architectural design, theme parks, motion pictures, fictional storytelling, training and just about anything else one can imagine. 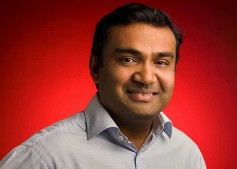 At 2016 NAB, Neil Mohan, chief product officer at YouTube, said his online service is perhaps the largest distributor of immersive content in the world — reaching billions of viewers each month throughout the world.

“Viewing content is more personal and more interactive,” he said, but must be used intelligently and with caution. “For example, seeing commericials while wearing a VR headset can literally make you throw up.”

YouTube, he said, is deeply focused on VR and headset viewing. “YouTube has the world’s largest library of VR content. Every video in the VR mode can be watched using Google cardboard. We’ve seen enormous growth here. Last month alone, VR playback grew by 400 to 500 percent.”

A success he noted is School of Rock, a Broadway play, which launched a 360-degree video performance to increase awareness about the theatrical work. “That led to a 3X spike in the amount of traffic to their ticketing website,” Moran said. “It turned the show into a smash hit. The show now generates over a million dollars a week in gross revenue.”

At NAB, YouTube launched spatial audio to go with the immersive video. “It lets you sense the direction and distance of a sound,” he said. “If you are hearing something on your left side, you should be able to hear it louder in your left ear. For something like a music concert, the sound will now reverbate all around you.”

While producers experiment with new ways to use immersive video, manufacturers introduced a maze of new VR-related technology at NAB. 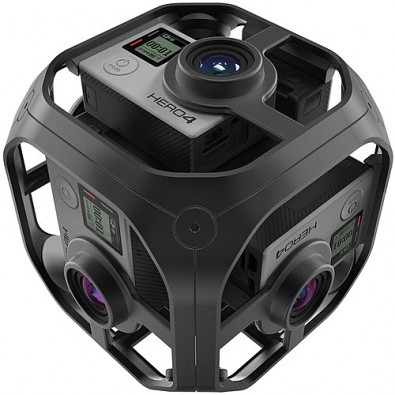 Omni enables pixel-level synchronization between the six Hero 4 Black cameras. The six cameras act as one — interacting with the primary camera in the array to configure settings or initiate the start/stop of recording for all six cameras.

Omni may also be used for “over capture,” creating video at 8K and extracting it to an HD deliverable. The Omni package will cost $4,999.99.

GoPro’s Odyssey packs 16 Hero 4 Black cameras, synchronized down to the pixel-level. This high-end professional capture device is optimized for Google's cloud-based Jump Assembler, which automatically stitches the camera content into panoramic stereoscopic 8K30 video that can be viewed via YouTube.

The company also showed solutions for live broadcasters wanting to use wireless GoPro cameras for immersive shots within sports or other types of live programming.

It seemed that a majority of the vendors at NAB had some take on VR. Drone makers showed support for multiple cameras. For example, the huge Gryphon Dynamics HD100 drone was almost seven feet in diameter with sixteen rotors and could carry up to five RED EPIC cameras with gimbals. 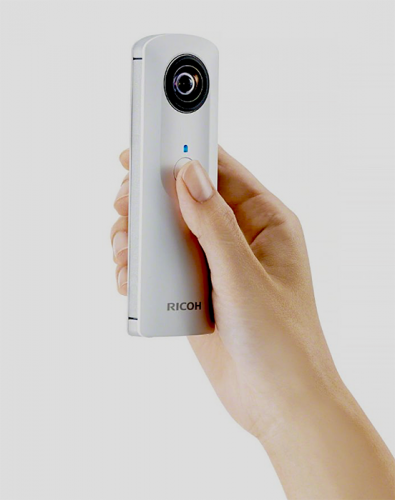 At a far lower cost ($350), Ricoh showed its entry level Theta S 360 degree camera, which has two fisheye cameras juxtaposed from one another and a stereo microphone. About the size of a TV remote control, the Theta S is easy to use, cheap and a good way for beginners to experiment with immersive video. 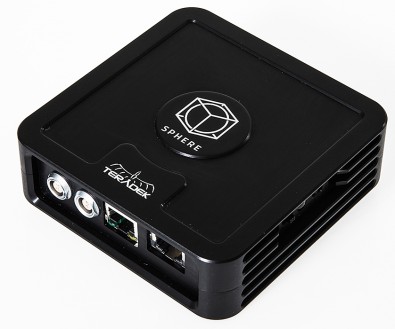 An interesting new device came from Teradek. Called the Sphere, it’s a wireless monitoring system for VR that allows viewing on an iPad. The Sphere app for iOS automatically adjusts exposure, tint and white balance across all four video feeds to ensure a consistent picture. It can also live stream VR video to YouTube.

Joining immersive video at the show was a new level of audio recording. Sennheiser announced a new focus on 3D immersive audio and introduced its AMBEO trademark.

“3D audio is the new frontier of excellence, set to transform the listening experience for users across a broad range of applications, from virtual reality gaming to audio recording and broadcasting,” said co-CEOs Daniel Sennheiser and Dr. Andreas Sennheiser.

An AMBEO demo area showed 9.1 channel immersive sound that followed the listener. Through a proprietary algorithm, the sounds in a VR game are easily localizable and transport the listener to an imaginary, yet realistic, soundscape. 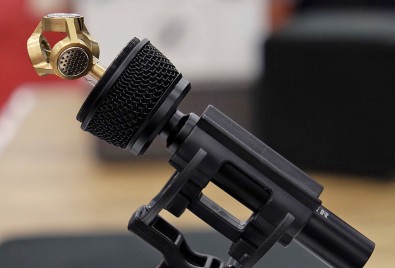 Sennheiser also demonstrated a new virtual reality microphone that captures high quality audio in four quadrants. The VR microphone will launch in the third quarter of 2016, followed in 2017 by a bundle with the same mic and a software plug-in for post-production of VR content.

Yet, with all the new technology and hype about immersive video and audio, it’s still an area rooted only in potential. A new report from the Knight Foundation and the USA Today Network acknowledged “the enormous potential, even though there are concerns over the format’s longterm viability.”

Open questions remain about immersive video’s use in news and documentary storytelling, the report said. Just having the technology is not enough. A key question is whether the audience’s news consumption habits will embrace immersive behavior.

The study was written by writer Patrick Doyle; former Gannett vp of product, Mitch Gelman; and Knight’s vp of learning and impact, Sam Gill. The researchers surveyed ten news organizations who have used VR about their impressions of the technology.

Though the results provided some insights into how outlets are thinking about VR, the study cautions that “little to no rigorous audience testing has been conducted, immersive experiences are still nascent and the discussion points are largely anecdotal and based on early impressions.”

Chauls at USA Today told the authors that his company is still trying to find the best way to get metrics about VR viewership.

“Anecdotally, people are amazed by the VR experiences we have produced, whether it is landing on a farm in a helicopter or walking the streets of Old Havana,” Chauls said. “But in terms of more empirical metrics, we have learned that the current metrics used for video are not applicable — and that a new range of reporting will be needed.”

Despite generally positive responses from audiences, news outlets are still figuring out the best practices for presenting VR content. Many users who watched CNN’s debate coverage in VR found the Samsung Gear VR headsets needed to watch the videos too heavy for a lengthy broadcast.

“The technology is not yet production-ready, and postproduction is too slow, but we can start to understand where this approach will offer value,” said Cyrus Saihan, BBC Future Media’s head of business development.

“It is very early days for this type of technology.”