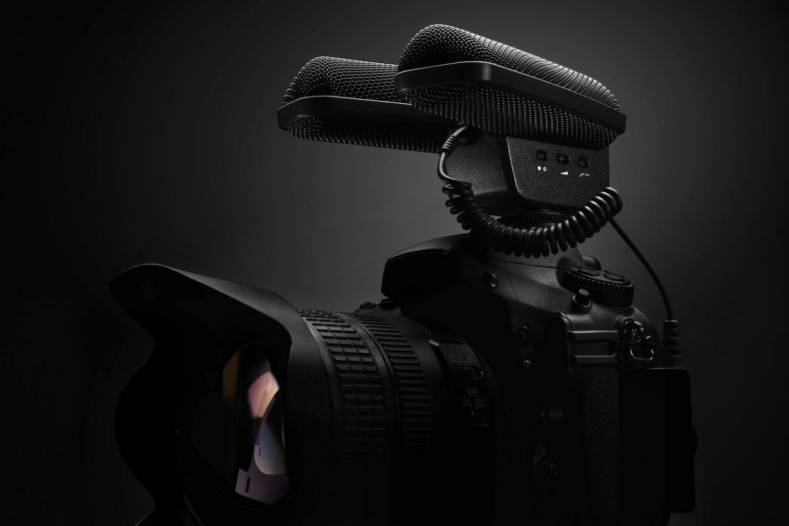 The use of digital single lenses reflex and GoPro cameras in professional broadcast has led many microphone manufacturers to produce mics designed specifically to work with this new breed of acquisition tool. Sennheiser showed its latest products in these areas at the 2016 NAB Show, with a new stereo unit for DSLRs plus a prototype ‘action mic’.

Sennheiser's MKE 440 is a compact stereo unit comprising two mini shotgun mics mounted on top of a DSLR. Designed for filmmaking, this unit picks up sound within the viewing area of the camera and is claimed to be superior to established mini AB (using two parallel mics), MS (mid-side) and XY (using two directional mics) techniques. The principle is that the V-shaped mounting of the two mics making up the MKE 440 captures the audio action being shot, while excluding most extraneous sounds.

The mini-shotguns contain super-cardioid capsules with pick-up patterns that coincide to form the area of capture. "The result is what I would call picture-matched stereo ambience," explained Kai Lange, product manager for broadcast and media at Sennheiser. "This lets filmmakers capture comprehensive dialogue with just enough ambient sound to preserve the atmosphere of a scene." 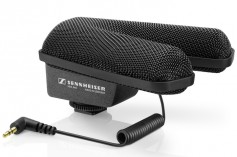 The MKE 440 has an all-metal, shock-mounted housing that fits into regular camera shoe slots. The capsules are behind a stainless steel micro-mesh to deal with wind noise but an optional 'fluffy' baffle is available for particularly windy situations. There is also a switch for selecting one of three levels of sensitivity that deal with soft and loud sounds, with a low pass filter to cut lower frequency sources, including wind.

Further explaining the MKE 440's stereo sound pattern, Lange said, "It will predominantly pick up the sound from within the camera angle thanks to its new stereo principle. This enables DSLR users to capture professional stereo sound in one go, which saves production time and effort."

GoPro cameras are now commonly used in broadcasting, particularly for 'special' positions and angles, and in more extreme conditions where the units have to cope with wind, rain, snow and mud. Sennheiser has developed a new microphone specifically for this application and previewed it during the 2016 NAB Show. The so-called action mic is contained in a capsule with a watertight connector that plugs into the camera. The manufacturer claims this is hermetically sealed enough to be used underwater.

The new mic is the first product to come out of Sennheiser's work with GoPro under the camera manufacturer's Developer Programme. It is now being tested on coverage of a variety of extreme sports, which commercial manager for Sennheiser's broadcast and media business, Achim Gleissner, said will "fine tune" the mic's performance. "Achieving uncompromising sound quality for extreme sports footage has been a challenge and more often than not extreme athletes have had to tone down their expectations regarding audio quality," continued Gleissner. "Our forthcoming action microphone will make wind noise a thing of the past and allow audio recordings where currently only video is possible."

There is no word on when the action mic will go into production but the MKE 440 is available from June this year.