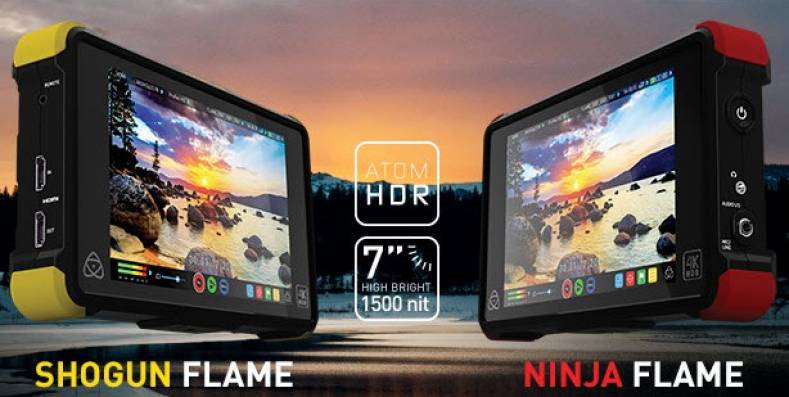 Atomos says that high dynamic range (HDR) is a major benefit for viewers (better colour renditions) and digital filmmakers and its new Shogun Flame and Ninja Flame, with their built-in AtomHDR engine, will help the industry get there sooner than later (much like the original Atomos Shogun helped the transition from HD to 4K filmmaking).

The Atomos Flame Series is a 7-inch field monitor/recorder that accurately displays 10 stops of the luminance detail of Log with 10-bit HDR Post Production color accuracy. This, the company said, is a first for a field monitor. The AtomHDR engine not only resolves HDR brightness detail (dynamic range), with 10-bit color accuracy it also resolves 64 times more color information than traditional 8-bit panels.

For Rec709 standard dynamic range scenes, the 1500nits brightness aids with outdoor shooting, as does the upgraded continuous power management system that will keep you shooting longer in the field. Users also get the required tools for 4K/HD Apple ProRes/DNxHR recording, playback and editing.

Jeromy Young, CEO and co-founder at Atomos, said HDR is “the next revolution for filmmaking. Anyone that sees HDR, from content creators to consumers is immediately sold, more life-like shots and real world detail. Our job is to open up HDR to all filmmakers by removing the technical and affordability hurdles that might slow its progress.”

The Flame series of monitor-recorders are equipped with the AtomHDR engine, utilizing the power of the 1500nit panel in tandem with Atomos’ patent pending image processing to resolve the brightness detail of Log camera signals with the color accuracy of 10 bit HDR images mastered in post production. This means that the usual complications of exposing Log signals on a washed out image are eliminated – with AtomHDR you simply frame, expose, focus and shoot. All major camera makers log formats are supported, including those from ARRI, Canon, JVC, Panasonic, Red and Sony.

The monitor itself is a calibrated 7-inch 1920x1200 325ppi IPS with upgraded 10-bit color accuracy, resolving 1.07 billion colors compared to the 16.7 million colors of traditional 8-bit panels. This all but eliminates the color banding seen on traditional panels and in tandem with AtomHDR lets you see images as you would with your own eyes.

For existing SDR, Rec709 delivery or scenes that do not have the wide brightness variation required for HDR shooting, switch to traditional video mode (Rec709) and activate a Brightness slider that lets you take advantage of the impressive “Daylight Viewable” 1500nits of brightness emanating from the Flame units. This adds huge versatility for the Flame series – if you have scenes that call for HDR, activate the AtomHDR mode. If you don’t, switch to High Bright mode for outdoor monitoring hood free.

The Shogun and Ninja Flame are enclosed in a rugged case and features:

The Shogun Flame and Ninja Flame are available for sale the week of March 28th, from the authorized Atomos reseller network, for $1,695 and $1,295 respectively.