PlayBox CloudAir's many uses can include disaster recovery.

The latest advance from UK-based PlayBox Technology is the highly innovative CloudAir platform. It enables new television channels to be set-up and established in a matter of seconds, without the usual preliminary investment in playout infrastructure. CloudAir is designed for those wanting to broadcast TV content on a real-time 24/7 basis, or for a short-running series such as a sports event. It can also be deployed as the basis of a highly secure disaster recovery system.

CloudAir is about speed, unlimited scalability and affordability. It has the potential to empower new or existing program streams wherever and whenever they are needed, in any video standard from SD to UHD. Available on a software-as-a-service basis, it offers established broadcasters or new-start entrepreneurs unsurpassed freedom in the style and scale of their operation and in the way they fund their business. CloudAir can provide true playout with graphics on any enterprise-class blade, rack or tower server. CloudAir needs no auxiliary hardware. 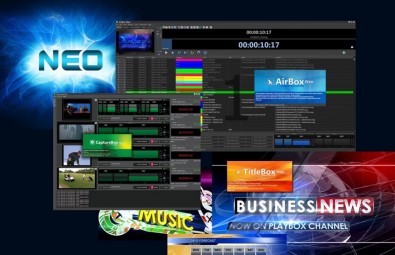 Several upgrades to the Neo Channel-in-a-Box suite will be demonstrated in the PlayBox exhibit.

Also on demonstration in the PlayBox exhibit will be the latest upgrades to the established PlayBox platform: AirBox Neo, TitleBox Neo, CaptureBox Neo and SafeBox Neo. They can be combined on a modular basis to match any size of operation ranging from a compact national or regional channel-in-a-box station to a large-scale multi-channel broadcast network transmitting to a global audience.

"The PlayBox Neo series is a powerful evolutionary upgrade option available to our entire user base," said PlayBox Technology President Don Ash. "Our design team has incorporated many new features and enhancements which we are confident will ensure the PlayBox platform continues to be the world's best-selling playout and channel branding product suite."

UHD compatibility is included, allowing channel managers to prepare for the latest generation of transmission standards as soon as they choose. UHD, HD and SD feeds can be managed from a single high-efficiency graphic interface that presents all the information operators need for a specific task. The new GUI displays text in white and light grey on a black background which is much easier on the eyes compared with the glare of a traditional white background. That is an important consideration for anyone supervising multiple channels during a long shift.

The core element of the PlayBox Neo suite is the AirBox Neo playout server. Designed for 24/7 unattended operation, it can also be operated manually – including the ability to handle live-to-air throughput. AirBox Neo supports UHD, HD and SD in a single server.

TitleBox Neo provides a wide range of interactive on-air graphics and titling capabilities which can be manipulated live.

CaptureBox Neo allows HD or SD content to be captured from up to four video sources simultaneously. They can be monitored on a single screen and controlled via a streamlined user interface with enhanced multichannel control and operability.