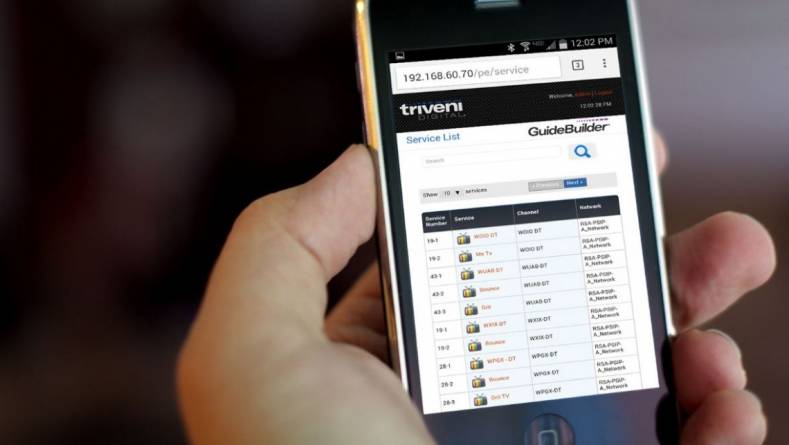 At the 2016 NAB Show, Triveni Digital will demonstrate its new broadcast data management and quality assurance platforms, which extend its current market-share-leading GuideBuilder and StreamScope product lines in a unified architecture. This approach creates a coherent solution to the problem of tractable workflow in the face of the growing number and complexity of services. Triveni Digital's approach will enable broadcasters to make a seamless migration to ATSC 3.0 to start deploying the new features and services, while still supporting the current broadcast infrastructure for the duration of the expected transition phase.

The company will showcase its new Broadcast Data Management Platform. Nearly all the new features envisioned for broadcast television advancement rely on new types of data, metadata, and signaling structures. While a given new service might be implementable independently, the full range of potential new services need a coherent approach to the gathering, packaging, and delivery of these underlying elements if the resulting infrastructure is going to be supportable and cost effective.

A key element of the platform is Triveni Digital's new GuideBuilder XM signaling system. It provides unified signaling and announcement functionality per ATSC 3.0, along with support for legacy standards such as ATSC 1.0 PSIP and DVB-SI. Delivery and signaling of media extensions and interactive elements, event triggering, interfacing to key broadcast systems, and watermarking workflow integration are also key features. Through the platform's user-friendly interface, broadcasters can deliver a mix of broadcast and broadband content to improve the television viewing experience, while maintaining a seamless workflow during the transition.

To be practical, it will be important that a broadcaster's new signaling and announcement system supporting ATSC 3.0 is not a standalone system, but an architecturally integral part of the overall service delivery infrastructure. GuideBuilder XM builds on and extends Triveni Digital's decades of experience with its market-share-leading GuideBuilder metadata platform, which features the widest range of third-party interfaces and deployment architectures available.

Triveni Digital will hold a technology demonstration at the NAB Show to showcase key components of the overall architecture and implementation of the Broadcast Data Management Platform, highlighting integration with systems from other prominent broadcast industry vendors.

The comprehensive platform comprises four major functional components, each responsible for a key element in the future broadcast delivery service mix. This approach allows a broadcaster to add the necessary supporting pieces in stages as services types are developed and launched.

StreamScope XM is Triveni Digital's new system for quality assurance in ATSC 3.0. Again, it leverages years of experience while bridging to the future environment with its ever-increasing complexity and growing number of compliance requirements. Early versions of StreamScope XM will be shown and discussed.