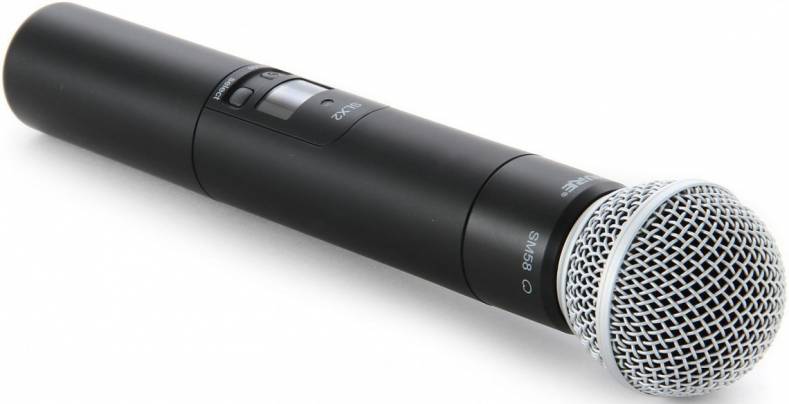 Mixed into the complexity of the incentive spectrum auctions ahead for television broadcasters are a small, but very worried group of users who depend on wireless microphones for their daily television programs and live performances.

Shure did some recent webinars to update wireless microphone users about what is known and what is not known as the FCC gears up for the spectrum auctions — the most technically daunting in history.

Gino Sigismondi, a Shure senior manager of systems support, and Edgar Reihl, a research and development director with wireless expertise at Shure, led the online seminar to an audience made up more of wireless users rather than sophisticated engineers.

Sigismondi and Reihl, after a highly technical overview of the auction process, basically told wireless users that much of what will happen to the popular 600 megahertz UHF frequencies will be determined by the auction’s outcome and that is now unknown.

“Don’t panic,” Sigismondi said. “The sky is not falling. What we know is spectrum below 600 megahertz will become more crowded. But some segments will remain available in 600 megahertz. But we won’t know where that is until the auction is over.”

For those now using 600 megahertz wireless microphones, he said, the FCC’s transition procedures will govern the use of their systems. That won’t start until after a public notice of channel assignment comes out from the commission.

“Once the public notice is issued, you should be constantly checking the databases to determine when the new services are to commence operation. Until that time, you are allowed to operate your equipment normally. We’ll know the exact amount of spectrum to be auctioned in about a year.”

Sigismondi and Reihl explored various alternative wireless options and possible new opportunities for wireless systems. The FCC’s recent actions seem to be in favor of keeping as many wireless options open as possible in the bandwidth landscape. The FCC has temporarily waived the need for a license to operate wireless systems and will allow indoor users out of the range of DTV signals to do co-channel operation at -85 dBm or lower.

“This is significant because it essentially opens up channels otherwise considered unavailable,” said Sigismondi.

“The FCC is committing to a further proceeding to search for additional spectrum,” Reihl noted, also signaling they are very aware of the tightening bandwidth for wireless users. 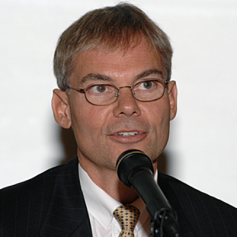 “If you wanted a license, you were once in a small class,” said Sigismondi. “Now the types of users have broadened. It now comes down to how many channels you use on a regular basis. If the answer is 50 or more, now you are eligible.”

Why, the Shure executives asked, does a user need to get a license? “If white space devices become an issue and there are a lot of them sharing spectrum, you could go into the white space database and reserve protected channels for your events,” Sigismondi said. “You can transmit at higher power and being licensed will give you more access to spectrum opportunities outside of the television band. If you are eligible, get a license. It’s a good policy.

Sigismondi and Reihl offered some current advice to wireless users. 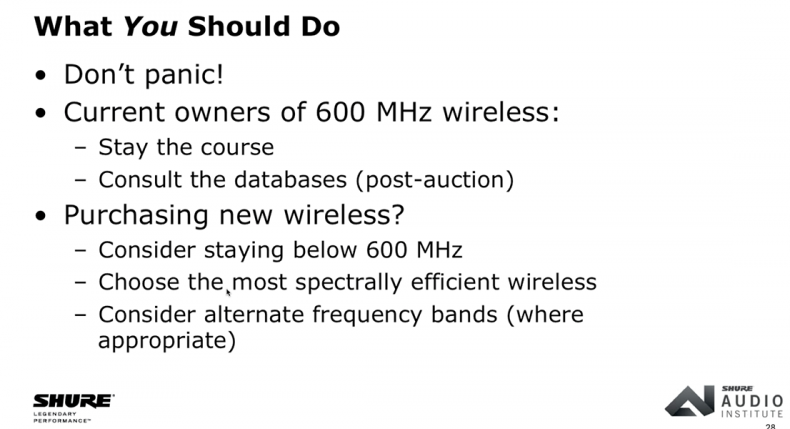 What You Should Do

“Staying out of 600 megahertz for now is not a bad idea,” Sigismondi said. “The most important thing we can tell you is to buy the most spectrally efficient wireless system you can. Ask how many wireless mics can I use in a small amount of spectrum? If you have one TV channel to operate in, what system allows you to cram the most wireless mics into that small amount of spectrum? That’s probably the most important specification you should be looking for now in a wireless system.”

There have been a lot of great strides made in the efficiency of wireless mic systems in recent years, he said. “If someone says you can use 40 systems across 60 megahertz, that’s all well and good if you have 60 megahertz available to you. But that may not be the case post auction.”

Also look for alternative wireless strategies and frequencies. “We are talking about back the future here,” Reihl said. “The VHF band is still available and is not being auctioned. There is a significant amount of spectrum especially in the VHF high band.”

“There are wireless systems that operate at 900 megahertz and 2.4 gigahertz and if you use a small number of channels, you can often use these bands that aren’t affected by this auction. They are definitely worth a look.”

What We Don't Know