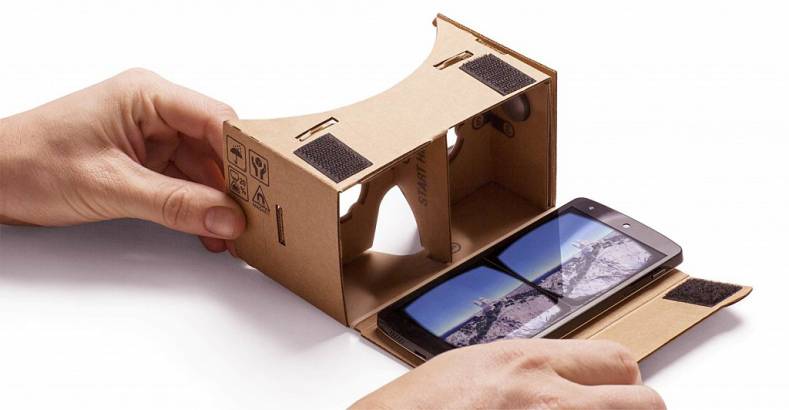 Google Cardboard created quite a stir when recently released. VR with a cardboard viewer and one's cell phone? Yes.

For the past year or so, there has been increasing buzz about virtual reality technology — from its production to viewing by audiences. But this month, one of the top newspapers in the world — the New York Times — adopted virtual reality (VR) for a new form of immersive storytelling.

The bold move to VR came shortly after the Times hit one million paying digital subscribers. As late of 2011, even constructing a digital paywall was considered controversial. But it generated about $170 million last year and digital subscriptions are said to be growing about 20 percent a year.

The Time’s move to virtual reality — which includes both immersive video and sound — comes at a time when monumental change is going on in the news business. Former print operations are moving toward newer forms of storytelling in an effort to attract younger, tech-savvy viewers. Fast Company just reported that the Associated Press is also pursuing VR content and could launch it within five months.

Social media is now making a major impact on how all adults get their news. The Pew Research Center reports that nearly half of adults now get their news about government and politics from Facebook. The Times and other news outlets have been talking with Facebook about how to enhance their offerings on social media. 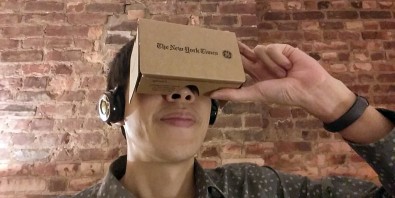 In early November, the New York Times magazine delivered to their readers free cardboard virtual reality viewers to use with smartphones. On the same day, the newspaper presented three video portraits of children driven from their homes by war and persecution — an 11-year-old boy from eastern Ukraine named Oleg, a 12-year-old Syrian girl named Hana and a 9-year-old South Sudanese boy named Chuol.

VR is described as 360 degree video because it allow viewers to step into a scene being watched and look up, down, around and behind. With headphones, VR videos can also be accompanied with immersive sound. The entire effect can give viewers a sense of being there.

“This new filmmaking technology enables an uncanny feeling of connection with people whose lives are far from our own,” Jake Silverstein, editor of the New York Times magazine, told his readers.

The move to VR, however, is not just limited to the New York Times and news outlets. YouTube, the planet’s most popular video site with a billion viewers each month, is now allowing users to view videos in virtual reality.

YouTube, which is part of Alphabet-owned Google, said it has made every single video in YouTube’s massive library viewable on the cardboard VR viewers and its Android smartphones. In fact, it has named the viewer “cardboard.”

For videos that weren’t originally meant to be viewed through VR goggles, Google is reformatting them to look like a presentation in an Imax movie theater. (The feature will come to the YouTube app for Apple’s iPhones soon, but YouTube hasn’t yet said when.)

“YouTube is about democratizing,” said Kurt Wilms, senior product manager for YouTube VR. “It’s about bringing this kind of video to everyone.”

VR actually began in the video gaming community and has spread to other media types. Now that YouTube is moving to an all-VR viewing experience, it will introduce millions of consumers to the technology. Expect Facebook and others to follow soon.

Last year, Facebook bought VR goggle maker Oculus for $2 billion. Oculus teamed up with Samsung to create the Gear VR, a $99 headset that uses Samsung phones as screens. It will launch this Christmas.

But the low-end “Cardboard” is where viewing is expected to catch fire. Google is making efforts to get the cardboard viewer into classrooms around the world. It’s starting in the United States, the UK, Australia, New Zealand and Brazil.

With the increase of viewing, also comes cameras, audio gear and editing for production. The New York Times is working with IM360, a Canadian firm, to provide apps and back-end technology.

The IM360 VR Platform, a VR and immersive video creation suite, enables media companies and brands to bring their content into the VR market. The company is also doing immersive platforms for the Gannett Company (publisher of USA Today) and The Expanse from SyFy, a division of NBCUniversal. The platform is white-labeled and allows media companies to begin using it immediately.

“Immersive content is rocketing from science fiction to the mainstream, and IM360 is helping bring this impactful technology to millions of viewers around the world, many of whom will experience in-home virtual reality for the very first time this year,” said Myles McGovern, president of IM360.

IM360 uses several cameras, including Hex, a high-resolution spherical digital camera system that uses a six lens and a 12 MP 360-degree camera that collects video from more than 80 percent of the full 360 degree sphere. Coupled with the imRecorder or im Live recorder, the Hex system provides producers with a digital camera package that records VR compatible video.

Another production package is the Quattro Camera. At 2.9 inches in height and 1.25 pounds, the Quattro is a compact, low-cost 360-degree digital camera. With four Sony ICX 724 CCD sensors, the Quattro captures a 4400 x 1550 cylindrical field of view at 15 frames per second. Camera data is transmitted through either Gigabit Cat 5E Ethernet or fiber cable.

Quattro is used with Immersive Media’s imLive Recorder, which is ideal for environments that demand a lightweight, low impact, high-resolution camera for either on-demand or live video.

Lytro is building a new VR camera system to be called Immerge. In addition to a camera itself, Lytro’s technology includes a server for storage, editing tools, a playback engine and a real-time streaming server. The whole package will cost in the hundreds of thousands of dollars to buy, but the more likely model is that studios will rent it for a couple thousand dollars per shoot, said Lytro CEO Jason Rosenthal.

Lytro’s Immerge will be available in the first quarter of next year, and Rosenthal said the company is getting interest from small VR content creators all the way up to the biggest movie studios.

To date, content creators have been forced to cobble together four to 16 standard digital cameras in a homemade rig, then try to create a single narrative from a bunch of individual scenes. That’s about to change as new camera systems come to market.

By making 360 videos in 3D as well, the goal is an even more lifelike look. To create that 3D effect, YouTube shows a different video stream for each eye. It’s the same picture, but from a slightly shifted angle. Viewed at the same time, it mimics depth. That helps create a sense of transportation.

Google’s in-house effort to create virtual reality experiences is called Jump. “The real world is incredibly fascinating,” said Husain Bengali, a product manager for Jump. “But when you can’t visit places in person, VR is the next best thing. We want to do that for more places than you could experience in a human lifetime."

Google’s Jump has also created a camera-and-software system that allows the capture VR footage. The company has partnered with GoPro, the camera maker, to develop its first specialized VR rig, a 16-camera device called the Odyssey that sells for $15,000.

YouTube will make the cameras available to some creators later this year at YouTube Spaces, studios in cities including Los Angeles, Paris and London that are owned by the video site.

For users with a large enough YouTube channel, the camera package will be free for use to make videos. They can also use resources like editing equipment and green screens for productions.

Though VR is beginning its high-profile launch, it is a long way from catching on with the public. The New York Times is beginning the most serious use, exploring whether news reporting can be enhanced with immersive technology. 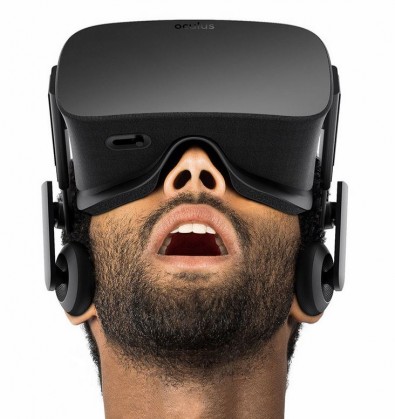 However, Facebook’s Mark Zuckerberg warned that VR will develop slowly and his company’s Oculus unit is in it for the long haul. In a third quarter earnings conference call, Zuckerberg addressed VR:

“We’ve said often that we think that virtual reality and augmented reality could be the next big computing platform. But just to put that in perspective and compare it to the development of previous computing platforms, like phones and computers, I think the first smartphones came out in 2003. And in the first year, I think BlackBerry and Palm Treo were the initial smartphones that came out. I think they each sold in the hundreds of thousands of units. So just to kind of give a sense of the time frame that we’re thinking about this and how we expect this to develop.”

As to the long-run, Zuckerberg said he thinks video and immersive experiences will eventually be huge, in “things that people can create, like the social content that they share on Facebook today, and more professional and premium content, both short form and longer form. But we’ll start to see some experimentation with that. There already is some very good content. But until there are millions of units out in the market, I don’t expect that to be a big industry for folks to be investing a huge amount in 2016.”