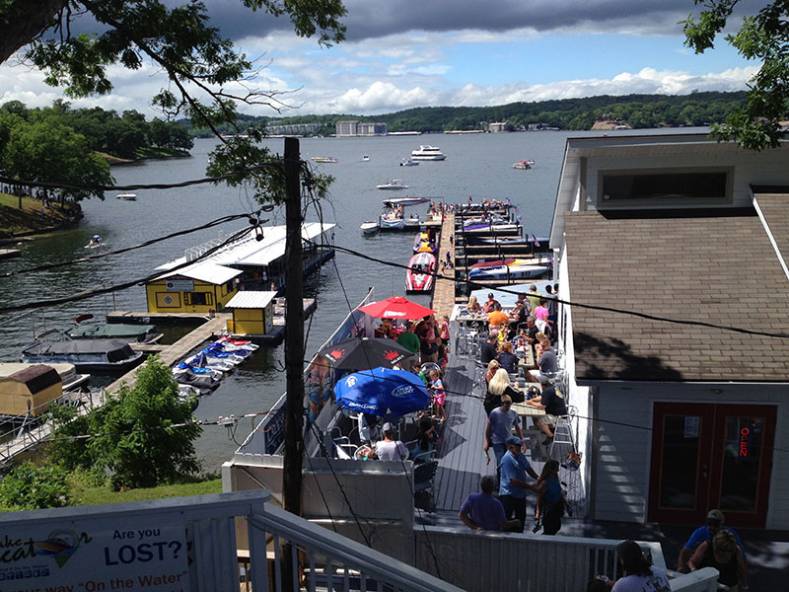 The Lake of the Ozarks has become a focal racing location for powerful speedboats from across the country. Broadcasting the two-weekend eve

The Lake of the Ozarks is at the center of powerboat racing action every year, on two separate weekends, each covered with two consecutive days of live outside broadcasting. One event is the Lake Race Invitational; the other is the Lake of the Ozarks Shootout. The broadcast coverage is literally radio with pictures. Both events are produced and broadcast live by KRMS radio in Osage Beach and televised live on regional FOX affiliates KRBK FOX 49 in Springfield MO, FOX 32 in Columbia MO, and streamed live on Ustream for distribution on the world-wide web.

The Shootout is a simple straight-line competition for top speed. Lake Race is an oval like NASCAR. At the shootout, each boat has one mile to attain top speed. A swing arm on a cliff overhanging the finish line has an array of 5 police-type radar guns mounted on it to capture official speeds. The current Top Gun Speed is 224 MPH, set at the Shootout last year.

A few years earlier, as boats got faster and began exceeding 205 MPH, racers and officials found that police radar stopped or didn’t register speeds higher than 208. The GPS on boats that registered over 208 or slipped through the radar undetected indicated speeds of 209 or faster. The race committee purchased new special radar units for built for higher speeds and Top Gun speed controversies were put to rest. Incidentally, the pontoon boat record is 106 MPH.

At both races, the production uses at least three live manned cameras on the race course, a locked-down studio camera, and a roving land-based camera for reports and interviews from the docks and spectator areas, typically connected to the studio by coax. The roving camera is also used for impromptu shots of babies, puppies, and other spectator subjects interesting to some viewers. In that role, the roving camera is affectionately known as the “Hottiecam.” It’s sponsored and spoken for. If you want that gig, you’ll need to stand in line.

Previously the roving camera was live, now it’s near-live. Using a camcorder to do what camcorders are designed for fit perfectly into the delay scenario. Roving shots are downloaded to the 3Play, approved, cued, and appear to be live. 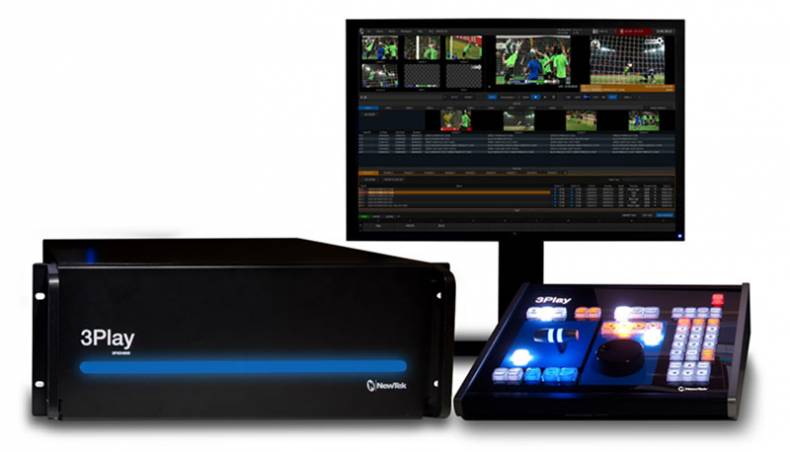 A NewTek 3Play 4800 was used to create highlight reels. It was driven by xxxx, the traffic manager at KRMS radio. She learned to operate the system by watching 3Play training videos on the NewTek website.

Being near-live gives control to the roving camera operator for second takes, bad takes and other mistakes. It also opens roaming up to virtually anywhere the action or plan takes the operator. Scenes are recorded in the camera, brought back to an outdoor coaxial cable outside the control room and connected for real-time 3Play ingest.

Everyone benefits from reduced production stress and better, more coherent shots, always on cue, guaranteed with no mistakes or surprises. Even people being interviewed feel less stress. Yes, there were some surprises when the Hottiecam was live. When the TV stations picked up the program, certain surprising behavior caught on the live Hottiecam for broadcast on a weekend afternoon was a valid concern, but not now. Is near-live near-cheating? Not really. Its television made easier.

The audio production is literally a radio remote with access to the embedded SDI audio from video sources with embedded audio. Outbound video and audio feeds from the remote control room are equally delayed, but audio on the radio station significantly leads the audio on television. The radio station backhauls it’s audio instantaneously via microwave.

If you watch the live coverage on TV and listen to the sound from your radio, you will find it confusing. Video from the remote site takes several seconds for the embedded studio output connected to the LiveU transmitter to be received and processed by the LiveU server at KRBK via the Internet. Then, add a couple more seconds for the satellite link for broadcast distribution.

The Internet STL backhaul system was dialed in for the highest quality because from that point, delay would be invisible and the remote program was timed accordingly. The remote site cued the TV stations with a party-line verbal countdown in and out of breaks, adjusted for the delay. Breaks were floating, but the timing of the show ending was adjusted for the delay so the end break would start on time. Usually delayed from the live action by field camera transport delay, in the case of live timing cues to TV stations, the control room is in the future. 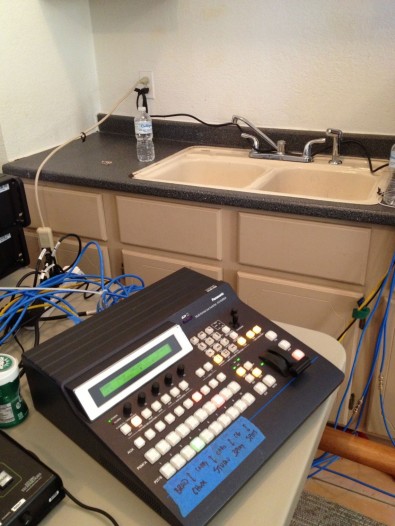 The Panasonic AV-HS400-A 8 input HD/SD SDI switcher proved to be the perfect solution for the broadcast.

Both races at the Ozarks are charitable events and most of the production gear is begged, borrowed or rented. The switcher was a Panasonic AV-HS400A 8-input HD/SD SDI switcher with SDI and analog outputs and a HDMI multi-viewer port. Feeds from AG-AC160 HD Panasonic cameras on the race course were transmitted by LiveU LU500 field units and available at the HD-SDI at outputs of the four-channel LiveU MMH series desktop server. A number of Grass Valley ADVC G1 any input to SDI output converters helped everything work together and allowed the integration of a SD analog graphics system now retired. 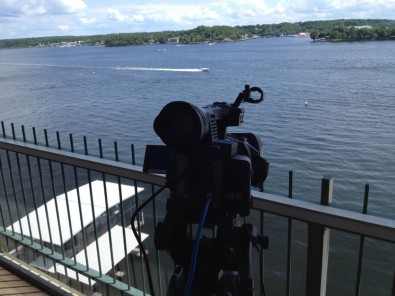 Each Panasonic AG-AC160 camera was coupled to a LiveU LU500 for transmit back to the control room.

Spots were pre-edited into break clusters and played from a local computer connected to the production switcher. An unintended benefit of having a computer output on a switcher input was the ability to ingest and integrate video from memory cards into the live production. The evening before the event, a local photographer and drone experimenter flew his drone over a street party meet-and-greet event. He brought us his memory card and we aired his video in the opening segment of the next day’s race coverage. It was spectacular and looked like we planned it. 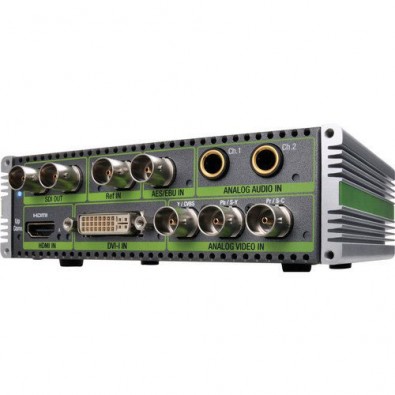 GoPro cameras are everywhere in sports and offshore powerboats are no exception. At the latest Lake Race, a pair of competitive high-profile race boats got into a disagreement. One boat claimed the other cut inside a buoy but officials didn’t see it. The next morning a crew member from the boat making the claim brought a memory card to the TV studio from one of its on-board GoPro cameras. The video clearly revealed the incident which occurred at about 170 MPH and was hidden by water spray from the rest of the world. The clip was broadcast, examined in slo-mo and discussed in the first segment. Officials disqualified the other boat. 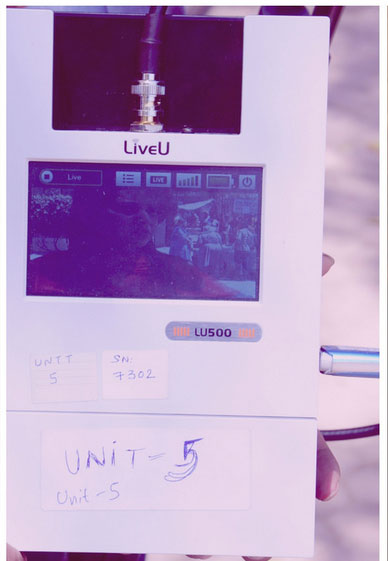 Along with the gear, LiveU sent engineer Steve Falco to help. During set-up, one camera would not come up at the switcher. Falco was logged on the MMH server with his laptop and instantly noted the problem. The LiveU system automatically senses the input format. Falco’s screen showed his system passing two 1080i and one 720p signals. The production switcher was set for 1080i only and completely ignored the 720p signal. The camera operator could see pictures, but nobody checked the camera output format settings. It had never been an issue before. The camera was miles away in near-impassable traffic. We had no SDI test gear and would have wasted a great deal of time or lost the shot entirely if not for Falco and that handy LiveU feature.

In addition to instant replay and slo-mo capabilities, the 3Play4800 easily built highlight reels which proved quite useful during breaks in the action and for opening segments the next day. In her day job, the 3Play operator is the one-person traffic department at KRMS radio. With very little video production experience, the operator studied the 3Play training videos at NewTek.com and mastered the system like an expert.

Over time, boat racing production at the Lake of the Ozarks has become more cookie-cutter and less free-style. Operators know their positions. Talent knows what’s coming. The crew and race venues are familiar and consistent. The show doesn’t do itself yet, but the production experience for crew members and viewers at home improves with every race.

The third and final installment in this series will discuss transport options, signal sources, the business structure, and the power of world-wide live program distribution.