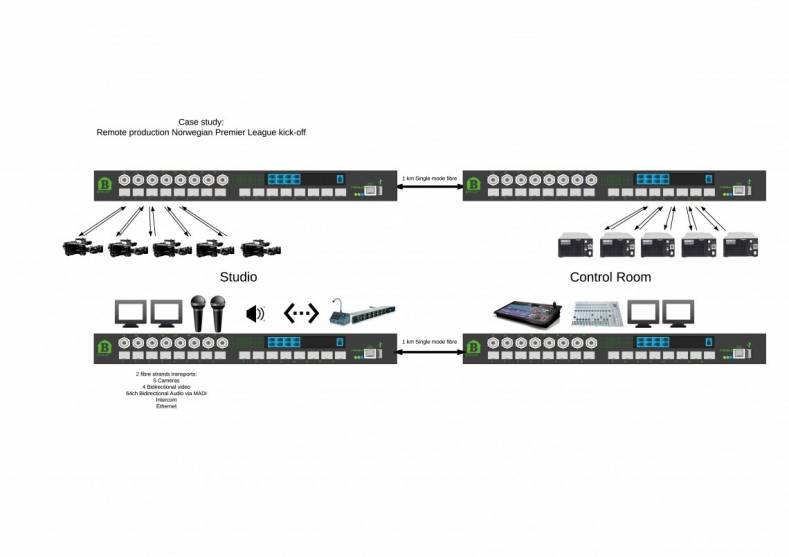 Example signal flow for the broadcast of a Norwegian Premier League game.

Remote production is a familiar term to most broadcasters. It usually means bringing a live event to a television audience. The concept is appealing, but the complexity of the signal transport between a remote site and the production facility often proves to be difficult—and expensive. Now there is an innovative solution that helps resolve both issues.

When broadcast engineers are told to prepare for a live production, many first reach for the aspirin. The complexity, work and likelihood of problems is usually the foremost thing in their minds.

For example, until now, a five camera production has required 10 dark fibre strands – and that’s even before a single return video, intercom or audio signal is taken into the fibre hire budget. It simply hasn’t been a viable solution for cost effective television production.

The BarnOne frame from Barnfind Technologies is a 1RU signal neutral 32x32 router, transport and conversion platform with a variety of interface options. The frames come with both bidirectional BNCs and SFPs, as well as RJ45 for ASI and D-­sub for analogue audio as connection interfaces.

The flexible architecture of the frames makes it possible to hot-­swap SFPs, change the direction on a BNC and reroute signals in the matrix as the production needs changes. The system is transparent and accepts any traditional baseband signal as well as IP and proprietary protocols. Through CWDM and DWDM functionality the amount of physical transport mediums can be significantly reduced.

A broadcast studio, or OB, camera is typically connected to a CCU through a hybrid fibre cable, transmitting video, audio and control signals via a bidirectional fibre pair, as well as power to the camera via large diameter copper wires. By powering the camera locally and breaking out the fibre pair it is possible to connect the camera signals via a SFP to the internal router in the BarnOne frame.

Doing the same on the CCU side gives the possibility to route signals between a specific camera and CCU. On a side note -­ in reality this means that it is possible to ’assign’ any camera position in a studio, or on a venue, to any CCU. By switching camera signals on this level, the need for manual or virtual routing of CCU video, audio, tally, intercom and RCP is eliminated. Whatever camera position ’assigned’ to CCU number 1 will always be ”Cam1” in the video, audio, tally and intercom router, with the RCP always controlling that camera. This reduces the routing complexity on the CCU side by a factor of five.

By using two frames – one at the camera side (remote) and one on the CCU side (home), and populating the frames with CWDM SFPs, the camera and CCU signals can be routed to specific light wavelength outputs. Connecting these outputs to a passive CWDM multiplexer on each end enables up to 9 cameras to be fed through a single fibre strand – with the exact same quality and functionality as if they were connected via discreet cables. As the system always reads out fibre signal quality, it is possible to monitor the signal path integrity from the CCU to the camera and back in real time.

A full feathered remote production is not limited to connecting cameras between remote and a home site. Video for on-set monitors, front of house position, LED-walls and more often needs to be transported, as well as audio, intercom and network. By connecting signals as SDI, HDMI, AES, MADI, ETHERNET, CVBS and KVM to the frames – electronic or optical – and multiplex it through CWDM, it is possible to bi-directionally send many typical signals, normally transported between a control room/apparatus room and a studio, over long distances with a single fiber strand.

This remote production routing functionalities also enables a centralized control room facility to have multiple production venues in a city, producing from more than one venue at the same time and allocating production resources via simple switching – boosting production output while reducing cost and complexity.

The BarnOne signal routing and transport solution from Barnfind Technologies has the capacity to dramatically reduce complexity of a typical production set-­‐up and can at the same time vastly extend the distance between a production unit and a production site.

The BarnOne system can, beside regular baseband and IP signal transport and routing, also route and transport camera signals to and from CCUs. This enables an entire production – consisting of cameras, video feeds, audio, intercom, control, Ethernet and other signals – to be connected uncompressed between a production unit and a production site via a simple pair of dark fiber over long distances.