Are broadcasters about to have their Kodak moment? The most repeated word around this year’s NAB, more than 4K, 8K, quadcopters, drones or IP, was “Disruptive.” The suggestion of the imminent obsolescence of broadcasting resonated in many exhibits. It was a curious trend to echo through the exhibit canyons at the world’s most important annual broadcasting show.

At NAB confabs of the 1950s, the next big thing was color. The 1960s changed the world with videotape and electronic editing. In the 1970s, when broadcast technology began to accelerate, annual NABs became technology milestones, re-defining broadcast news and television with the ENG/EFP/tape revolution and the introduction of station automation. It was also about the time film and camera market leaders Kodak and Polaroid realized they were in chemical quicksand.

After Y2K and the DTV transition, DSLRs, smartphones, second screens, IP and the Internet have become the dominant focus of industry attention. The stream of new television products headed for homes and/or Hollywood all improve as bandwidth self-perpetuates. When content and bandwidth drive each other, everyone benefits. Training was a popular option in many exhibits.

Every NAB features more game-changing technologies than the one before. It’s easy to get caught up in the hyperbole. A Frost & Sullivan manager participating in a roundtable discussion at one major manufacturer’s NAB press conference said “the Internet is the biggest thing to ever hit television.” A Microsoft manager at the roundtable called the trend “Massive de-mediaization.”

It all sounds pretty good if you don’t notice that only a few corporations control nearly all of today's media or factor in growing Internet security uncertainties. I heard and overheard several spins during the course of NAB 2015 suggesting that advertisers aren’t interested in over-the-air TV viewers because they don’t have any money.

Those who live in the industry know that the next big television game-changing hit can turn into a big dud, such as 3D TV, analog 1125/60, Betamax or plasma screens. Interestingly, someone on the same roundtable panel I won’t quote suggested there is “No value to 4K.” Excuse me. You’re in Vegas. 4K is the new ante.

What we don’t know

The trend of the news and entertainment industry putting all its eggs in one Internet basket is rather disturbing. Broadcasters should know better, but who wants to think about worst case when the Internet hyperbole inertia is so comforting? Isn't the mission of over-the-air broadcasters to serve as a community lifeline in times of emergencies, such as hurricanes, floods or when other communications systems fail?

The broadcaster has complete control when the content-to-TV path is a direct a RF connection. Compare that confidence level to the magnitude of unknown private and public devices and networks it takes to move content over the Internet. The right crash anywhere could result in TV nowhere.

The ‘net is becoming a virtual transmitter, tower and antenna when in reality it is nothing of the sort. In broadcasting, every Plan A needs a Plan B. What is broadcast Plan B when Internet speeds drop to that of Morse code or worse? Why would an industry that well knows that anything that can happen will happen at the worst possible moment, bet the farm that Internet service interruptions or successful attacks will never happen? Didn't Sony Pictures just have an Internet security meltdown?

In addition to the unknown territory of repacking and spectrum auctions, new FCC Internet regulation will have "kill switches", more fees, taxes and who-knows-what we don’t know yet. Hackers around the world are hell-bent on attacking and wrecking the ‘net for all kinds of reasons political or personal. Who can accurately predict the future of the Internet or over-the-air broadcasting?

What we do know

The only certainty in the industry is that people like to watch TV. How they get and watch their TV in the future is the center of great debate. Experts ignoring the KISS principle of television viewing are arguing over how long linear television broadcasting can last.

Television is a passive activity, too simple for some intellectuals to understand. To paraphrase a Mark Twain quote, reports of linear television’s imminent death have been greatly exaggerated. Got any more buffalo wings? 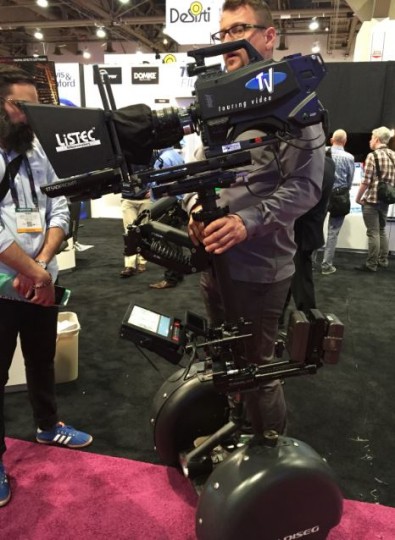 Most exhibits at NAB 2015 that were not focused on producing content were focused on moving content from distributors and providers to viewers across computer networks. About the only domain remaining exclusive to broadcasters is content delivery by transmitters, antennas, towers and products from manufacturers that require call letters and a license, aka “Big iron.” Nearly everything else on display at NAB is for anyone who wants to tell and/or deliver a story electronically.

The next big thing

The hits of the show depend on what a visitor or group of visitors was looking for. There were many categories and areas that could be the only technologies a focused visitor or group would have time to thoroughly investigate during the limited time the show is open. This year, drones dominated that category.

What I found most positive at the show was High Dynamic Range (HDR) technology. HDR was discussed at last year’s NAB. This year, HDR displays could be studied and observed in several exhibits.

HDR is great news for broadcasters because they don’t have to do anything. It doesn’t require extra bandwidth or more compression and it’s not a new format. It's a display technology. The success of HDR will depend almost entirely on the television display market. The pictures are striking and viewer benefits are immediate. HDR may be the buffer that saves broadcasters from full-on 4K.

Globecast demonstrated HDR with three side-by-side, 50” flat-panel monitors that appeared to simultaneously display the same 4K video. The monitor in the center was obviously brighter and better. It turned out that the monitors on the ends were off-the-shelf 4K, but the center monitor was actually standard HDTV with HDR technology displaying the 4K signal downconverted to 1080. It was an amazing illusion that fits realistic viewing environments.

The extra pixels in 4K displays disappear with viewing distance. The visual advantages of HDR are dramatic at any distance. Preparation of content for HDR is as simple as different color grading. HDR displays and projectors provide a deeper color pallet for producers and videographers to work with and delivers stunning film-like contrast ratios to viewers. Will HDR outshine 4K for home viewing? Some are predicting HDR TVs could be the next big thing this coming holiday season. 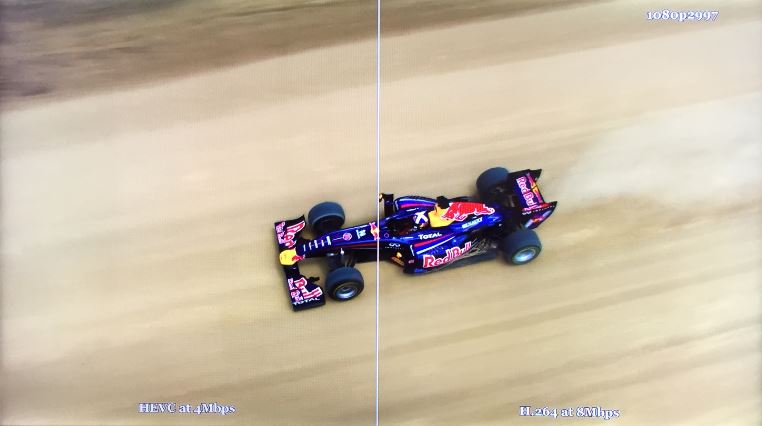 Side-by-side compression comparison displays were easy to find but sometimes difficult to see the difference.

Every NAB is famous for new buzzwords. "Disruptive" was the newest and most used this year, but there were other new words too and a few we've heard before.

Studio gear and interfaces are moving towards “IP” and the “10GbE” networks necessary to support 4K or better production. Some new professional rack-mounted video monitors accept “SDI, HDMI” or “IP” in, and use “Internal transcoding” to convert to the three formats for output and monitoring. Individual “IP encode and decode” cards and stand-alone units were commonly found in many exhibits.

On the content production and distribution side, “The Cloud” continued to be the granddaddy of generic digital buzzwords. The Cloud also appears to be the “Next-generation” replacement for the home DVR. “Compliance” was also of greater interest to content producers, distributors and TV stations this year. 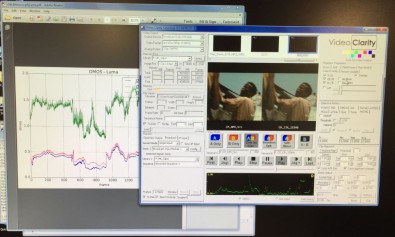 The test and measurement category is undergoing many changes that few but engineers might notice. Not unlike most other segments of the broadcast equipment industry, some old brands are shrinking while some newer brands are building on success. Digital video and audio require deep measurement far beyond familiar baseband tests and observation. Compliance has become a category unto itself.

Digital media streams generate daunting numbers of bits and data to verify. Most new T&M gear makes exhaustive comprehensive signal testing and analysis different than reading a baseband ‘scope but just as easy. Some new monitoring and logging products aggregate T&M and monitoring data to provide a host of powerful analytic tools for nearly everyone at a TV station. The trend of new products containing web browsers, dashboards and apps for remote monitoring and control has become the norm. If you’re the person who gets the call to fix a 3 a.m. problem, you know how much better it is to fix something from miles away with a mobile device than it is to go physically fix it.

Creative geniuses and producers will parse and debate the pros and cons of all things digital for many NABs to come, but digital remote monitoring and control is side benefit every engineer can personally praise today.

This year’s 1,789 exhibits covered more than one million square feet. 103,042 visitors exceeded expectations with 5127 more than last year. Exhibitors were pleased with the quantity and quality of booth visitors and most felt there were fewer tire-kickers. My iPhone logged a daily average of 7.5 miles of exhibit walking. 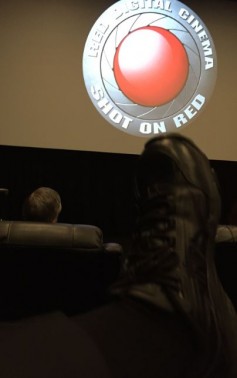 Socks were on before the presentation started.

Last but not least, my first exhibit visit was to an early press conference in the RED Digital Cinema Theater, before the exhibit halls opened. The company introduced a new camera and presented a short film by Avi Cohen with White Revolver that knocked my socks off before 9 a.m. Monday morning. It’s rare for me to throw a sock at any trade show, let alone first thing. This year’s NAB was a sock knocker.