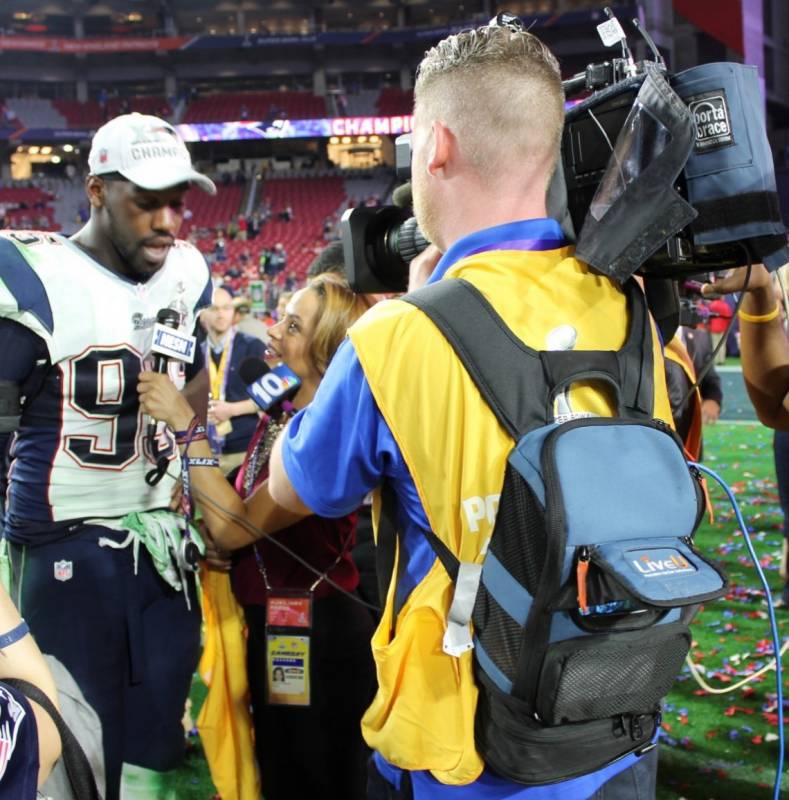 LiveU supported the transmission of 4,460GB of data and 1,785 hours of video for Super Bowl XLIX, The Broadcast Bridge spoke with one of the participating stations to learn more about their experience.

“LiveU is starting to replace the need for news SNG trucks and satellite time we’ve contracted in the past; it also frees up man hours previously used to feed video using FTP technology,” explains Joseph Maar, NESN’s vp of programming and production, and executive producer. “In arenas, ballparks and locker rooms where we have no access to a dedicated fibre connection, LiveU has provided us with more options for content delivery back to our control rooms near Boston and allowed us to greatly expand and enhance our sports news coverage on a nightly basis. Our daily news programs went from a half a dozen remotes per year to over 600 per year.”

LiveU also helps NESN increase the quantity and quality of video content for its website NESN.com. During the two week period between the AFC Championship game and the Super Bowl, NESN.com received 10.4 million New England Patriots-related video views. Maar attributes this to the amount of content the station was able to acquire and quickly transmit back to its studios using LiveU.

“We use two LiveU 500 backpacks on a regular basis and add an additional third LU500 during Red Sox Spring Training coverage and when the Red Sox and Bruins seasons overlap and we have two live broadcasts going on two of our networks at the same time,” explains Dan Brokowski, NESN’s Senior Manager Technical & Production Operations. “We deploy LiveU units for breaking sports news, Boston team press conferences and get unique access such as traveling on a parade float during the Patriots Super Bowl Victory Parade.”

There are however some drawbacks to such systems. High cellular traffic areas usually present the biggest hurdle, which is often a challenge during sporting events.

“With some pre-planning you can bond additional IP Ethernet and Wifi to the system for a more robust transmission quality,” says Brokowski. “While cellular bonding is still in the early stages of development the technology is developing and improving very quickly. On the plus side, the backpack units have gone from 23 pounds to 2 ½ pound backpacks. In addition the LiveU technology is now utilizing a Linux based playform for better quality and transmission reliability.”

Since the first appearance of LiveU’s technology at the 2010 Super Bowl, LiveU has reported accelerated growth of its adoption each year. LiveU attributes this increase in demand for Super Bowl coverage to trust in the cellular bonding as applied by LiveU as their primary means of uplink and the increased LTE deployment by cellular carriers, resulting in broadcasters sending a greater number of LiveU devices, and renting or driving-in fewer satellite trucks compared to previous years.

The lower cost of LiveU compared to traditional uplink, plus the desire of local stations to produce more original content to be competitive, is another factor. This includes those who aren't rights-holders for the game and aren't from the participating markets (such as stations from outside New England and Washington state, and non-NBC affiliates).

More NFL teams, even those not in the game, sent representatives with their LiveU units to cover their Pro Bowl players and other events at Radio Row. More than half the NFL teams currently use LiveU on a regular basis to stream exclusive content to their websites and mobile apps, claims the tech firm.

“Fans crave sports-related content. Over the past few years we’ve seen demand for content increase, and both traditional and online media increasing their amount of coverage to maintain a competitive edge and to cross-promote their other assets” said Ken Zamkow, LiveU’s VP Marketing, Americas. “Although we ended up not needing the hotspots at all, we secured them because we wanted to give our customers an extra layer of redundancy and peace of mind, in the event that there would be cellular congestion in downtown Phoenix during the week. But the reality was that the cellular LTE coverage was excellent, and our own technology has matured to a point where everything was chugging along smoothly across downtown Phoenix throughout the week.”