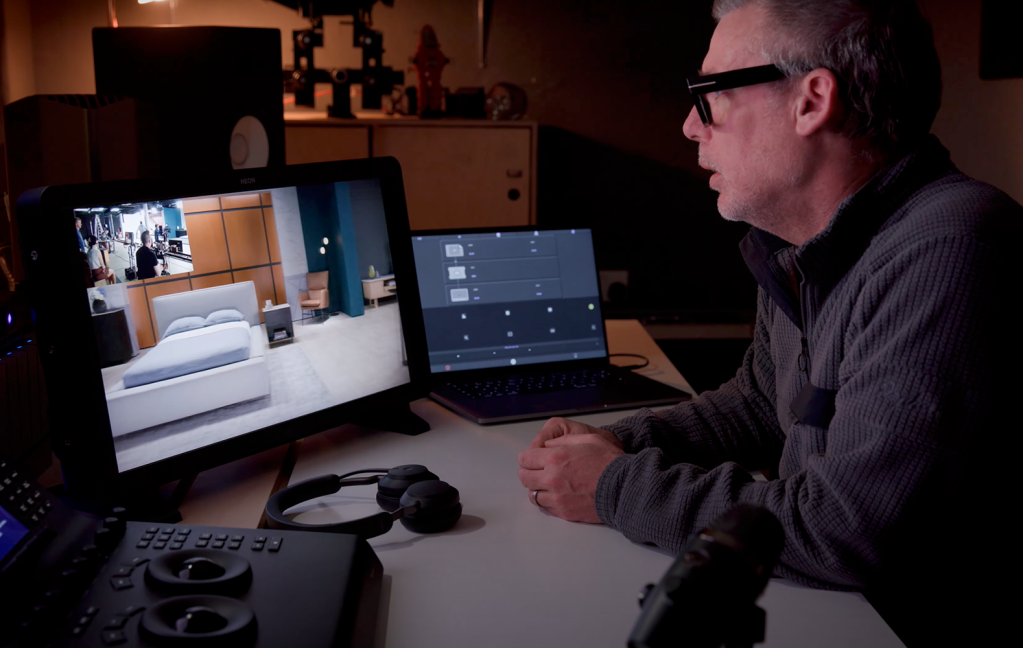 Innovative technologies have enabled remote production to take center stage. Although live video capture remote from the studio has been happening for years, COVID-19 has forced this trend to evolve. Today, everything from filming content to directing to editing can be done remotely.

One adopter of remote production is Brett Danton, a successful Director, Cinematographer and Director of Photography. Having spent his whole career working with and adopting new technology, he now calls himself a technologist too. 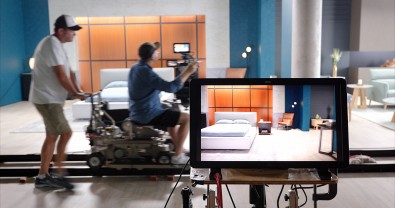 Brett works with world-renowned brands all over the globe, most recently in Australia for the furniture brand, Nick Scali. Rather than flying across the world and navigating COVID-19 restrictions, Brett directed the commercial from his home in Essex, UK. “I’m giving myself jetlag at home”, he joked. Whereas traditionally department heads would fly to set, now they can work remotely.

For Brett and his crew, remote directing seemed like an unlikely idea pre-pandemic. “I remember the crew joking that I’d find some way of directing from home and the client laughing. And then it happened, and we had to do it”. Brett had to convince his clients that remote production was not only possible but could create the same results as if he were in Australia. He stresses that the correct equipment and setup were required to achieve this.

“We needed the highest quality image with the absolute minimum delay to make this work. I wanted to set it up so that I felt like I was in video village”.

After experimenting with various systems Brett finally settled on Colorfront. “The advantage of Colorfront is that you only need the equipment at one end”, says Brett.

“Pre-pandemic, there was a latency of five-seconds - hopeless for remote production. With this setup I can view 4K HDR material with a 0.3 second delay. It just goes to show the advances we have made in such a short period of time”, he adds.

Showing off his impressive home set-up, Brett explains that both he and the crew have matching Atomos NEON monitors, so they can view the same image at the same time. They also installed witness microphones around the studio. Brett has a full surround sound system at home so he can hear the entire studio and be a part of the action.

“Color accuracy is paramount,” observes Brett. “The Atomos NEON is the perfect monitor for studio and location, guaranteeing a consistent image and reference across shooting and post. Another big advantage in the remote pipeline was its built-in recording. I recorded takes at home to review, while the crew could move on.”

Adopting this new way of working wasn’t as difficult as expected. He recounts an incident where he lost power and was still able to direct remotely: “I live in a field in the middle of nowhere and we had a sudden power outage halfway through the shoot. The signal was so good that I jumped across onto my iPad on 4G and carried on directing. It wasn’t ideal but that’s how good the systems have become now”.

However, he believes that taking shortcuts and using Zoom or a computer monitor to direct won’t cut it. For the Nick Scali commercial, it was important that the stitching and the details of the furniture could be seen. That required a good connection at each end and razor clear monitoring.

“Whatever you do, whatever monitor you’re looking at, whatever feed you’ve got - it must be the same quality as what’s in the studio. The minute it drops below that, then problems start to creep in”.

Trust and communication also play a fundamental role in remote production. Brett relies on his DoP physically on set to walk around the studio and feed information back to him. Some of his friends have used Google Earth to plan their shoot if they haven’t been to the physical location. Fortunately, Brett was already familiar with the Nick Scali set as he had designed it and shot there before. 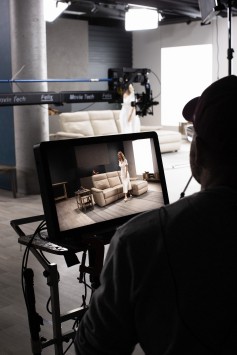 “My gut feeling is that you still can’t beat a location recce or looking at the space once. But once you’ve done it, you almost don’t need to go back”, he says. He adds that this is only possible if you have a good quality image coming through.

To communicate with the crew, Brett tried everything from walkie talkies to Zoom. Eventually, they transformed Brett into a self-proclaimed robot whereby an iPad with Zoom and a professional mic was wheeled around set on a stand. Even the client joined the shoot remotely on a separate feed so they could watch the crew and the live image back together.

Although Brett enjoys the lack of distraction and hassle of flying, he admits to sometimes missing the atmosphere on set and the freedom to walk around and pull crew members to the side. The brainwave of putting witness microphones in the studio and hearing the chitter chatter on set has helped him feel more involved. But he was quick to return to the positives, “my wrap time was just closing the laptop”, he laughed.

When discussing the future of remote production, Brett not only believes that it will be used more often, but that it will go even further. Having no control over the quality of the client’s viewing device can cause issues, so he hopes that software will be developed to create a standard for color grading.

“I want something client-proof that literally shows them the color box, where it’s going to clip the image or where it is color shifting. We use Frame.io for reviews and it would be great if that standard was built into it”, he says.

Concluding, Brett is convinced that remote workflows are here to stay. “From directing to color grading, we have to embrace technologies that give us the best workflow and quality to achieve the highest standard.”