Imagine Communications is joining with Sony (and nine other broadcast equipment vendors) in supporting an industry-wide initiative started by Sony, to speed consumers’ transition to UHD/4K viewing while facilitating broadcasters’ and content distributors’ migration from legacy SDI to IP-based network infrastructures.

Imagine Communications is joining with Sony (and nine other broadcast equipment vendors) in supporting an industry-wide initiative to move to UHD/4K production.

“We basically got together and said the current state of technology, such as having four HD-SDI feeds coming out of a Sony camera, is just not practical for UHD/4K production,” said Glenn LeBrun, vice president of product marketing at Imagine Communications. “It also didn't make sense to try and push 12 Gbps over coaxial cable [there are 12 Gbps chipsets coming soon from companies like Broadcom that will make this possible]. We’re reaching the limit of SDI carrying capability and it’s time to move on.”

Today, most studio cameras use one HD-SDI cable to carry a single uncompressed baseband signal that may require up to 3 Gbps. Because UHD requires four times the bandwidth of HD, compliant production equipment must include four HD-SDI cables. Replicating this massive cabling requirement throughout a traditional network infrastructure presents significant logistical challenges.

LeBrun said they are talking about using a light “invisible” compression scheme and package it inside an IP wrapper. Sony’s Networked Media Interface provides a virtually lossless UHD/4K compressed stream over IP signal. Although such a signal in some cases may require up to 12 Gb/s, Sony’s technology provides minimal compression of the signal to enable it to be carried in packet form over common 10 Gb Ethernet fiber or twisted pair cabling.

“We’re basically saying, there’s lots of great things that are happening here; such as the new SMPTE 2022-6 standard that allows users to package and send SDI signals over an IP network, a great acceptance of IP in the cloud, and 10-50 Gbps Ethernet switching,” LeBrun said. “We’ve got to take advantage of these advances now or the broadcast industry won't be competitive in the future.”

Indeed, Steve Reynolds, CTO of Imagine Communications, said the logistical issues associated with the massive bandwidth increase required for UHD/4K are almost forcing the industry to migrate to an IP-centric network environment. “Fortunately, we have enablers that help us in this transition such as Sony’s Networked Media Interface. Add to that the new capabilities like ubiquitous 10 GbEs and 40 GbE IP switching provided by the IT vendor community and other innovations like Imagine Communications’ recently announced Magellan SDN Orchestrator. The industry now has complete solutions to enable their gradual transition to UHD/4K.” 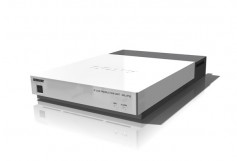 Remarking on IP switching and routing, LeBrun said it doesn’t make sense for Imagine or any vendor in the broadcast industry to develop high-capacity Ethernet switching when established vendors like Cisco have already been doing it for many years.

“What we see is that some plants will be a hybrid baseband/IP approach, but as soon as you want to move to 4K, you are almost forced to find a hybrid approach because there’s no way you want four ports for every piece of equipment, for one signal” Lebrun said. “It just doesn’t make sense to have your cabling infrastructure and your carrying capacity be a limiting factor in your ability to delivery content everywhere, to all platforms.”

Imagine’s answer to this migration problem is called the Magellan SDN Orchestrator, an automation/management system that allows broadcasters to work the way they always have. Behind the scenes it uses dynamic signal-flow connections, managing signal mappings, addressing, and translations between legacy protocols and IP. Lebrun said this hybrid approach to SDN allows the entire bit flow to be software-defined, providing for managed workflows that support the concurrent coexistence of IP streams, files, and baseband signals. With it, media companies can use familiar workflow processes and controls while also managing on-ramps and off-ramps for baseband over IP via a software control layer, significantly improving the way video is managed throughout broadcast facilities.

Sony and Evertz are also working together to develop new IP interoperability technologies. The two companies first announced their strategic alliance at IBC 2014, as a continuation of their efforts to introduce innovative IP-based solutions, such as Sony’s Network Media Interface and Evertz’s Software Defined Video Network (SDVN) solution.

This solution, which currently only supports 4K signals, also leverages existing data center-grade COTS switching technology that allows media companies to ride the ever-improving cost/performance curve of the IT industry.

It will require every camera to have Sony’s special compression chipset that will allow four SDI signals to be sent over a single coaxial cable. Video routers, switchers and servers will also need this chip-based interface to interoperate with the camera and other gear. There are several competing solutions to do the same thing, but in a slightly different way.

“This is all about the industry resolving a huge issue that is about to overtake us,” LeBrun said. “Customer demand for this technology is pushing vendors like Sony and Imagine Communications to develop these interfaces faster, and that’s good for everyone. We’ve got to figure this out quickly and collectively, and this interface initiative is a good solution to the problem.”