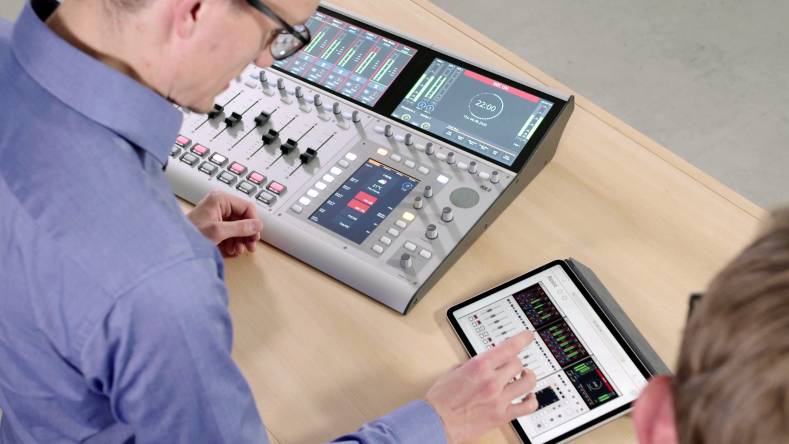 "Many radio and TV stations rely on our consoles as the core of their production and transmission activity, every day of the year," says DHD's International Sales Manager, Christoph Gottert. "We work in close partnership with our customers and in that way help to shape the future of digital broadcast technology. Our latest firmware additions expand the capabilities of version 9.1 which we announced in Q1. That update included support for Unicode character sets such as Chinese, Russian, Japanese and Korean, Snapshots App and Labels App, enhanced log-in, hot configuration and refinements to the DHD REST API. We are now introducing two additional web apps, Assist App and System App, plus an advanced SNMP interface."

Assist App is a browser-based application allowing remote operation of a DHD mixing desk from a tablet, laptop or desktop PC. The remote user is able to control fader and central modules and can view any of the integral displays. Assist App enables a technician to support DJs during their daily operation without being on-site. The app is compatible with all DHD RX2 and SX2 mixers as well as our TX touch panels.

System App provides all the control needed to configure and supervise a DHD system. Its interface includes functions such as IP address assignment and web connection management. Detailed information for each module connected to the core is displayed, including serial numbers, temperature and uptime. All local and IP connected remote devices can be seen, including any inactive remote channel which is blocking a Views app or Assist app license.

SNMP is intended for use where DHD mixers, routers and processors are deployed as part of large infrastructures, and where device states are centrally managed. It allows an external SNMP server to connect to the core without needing any middleware. This eases the setup process and allows system data such as temperatures or power alerts to be accessed. SNMP is available for all DHD XC2, XD2 and XS2 cores. It will also be available for DHD AES67/RAVENNA interfaces later this year.