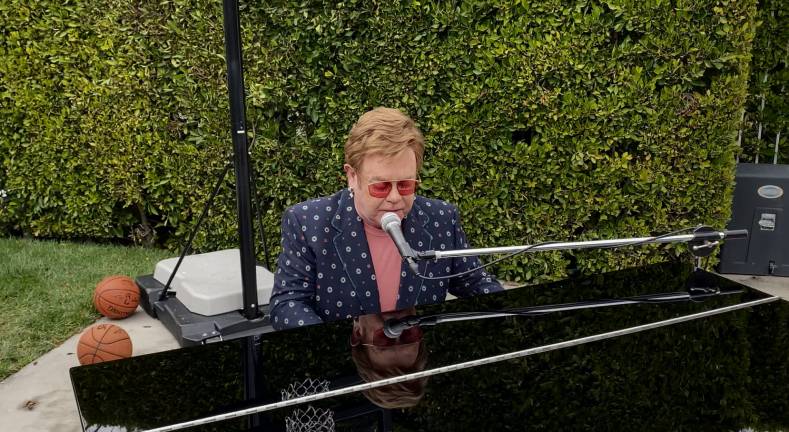 ​DaVinci Resolve Studio was used to post produce Elton John’s performance of “I’m Still Standing” for One World: Together At Home, the global digital broadcast to support frontline healthcare workers and the WHO.

With more than two million views on YouTube alone, the entire project was completed by a team of four people in just 20 hours.

Captured in Elton John’s own driveway using a camcorder, tablet and smartphone on a Movo handheld rig, with post completed at Sobchack’s Los Angeles home.

“This was obviously unknown territory,” explained Sobchack. “To keep exposure to a minimum, one trusted crew member was onsite during the shoot, along with David Furnish, Elton’s husband and CEO of Rocket Entertainment. David directed and shot Elton’s performance in just two takes. The three video tracks and individual direct vocal and piano recordings were sent to me immediately after the shoot.”

Sobchack ingested the elements into Resolve Studio’s media pool, and since he had no timecode or slate to rely on, he used the edit page’s audio waveforms, fine tuning within the Fairlight page to manually sync all three video tracks with their onboard audio. Once complete, he brought in the raw WAV audio files, repeating the process to sync the piano and vocal tracks to the master video.

Sobchack and wife Nicole then partnered on the edit. “I love the ability to resize the video and audio tracks separately depending on what I am doing,” he said. “I needed to use the waveforms to manually sync the assets, and the simple, quick keys to zoom in and out and snap back to a full project timeline view made it a breeze.”

DaVinci Resolve Studio’s Fairlight page was used for all audio processing and to fine tune the manual sync of the assets. “I love the scrub feature, and being able to see the GUIs for all the plugins, such as iZotope‘s RX 7 and Waves, gives you a real visual feel for what’s going on,” added Sobchack.

Sobchack then began grading, which according to him was a little challenging given the camcorder’s color science was more Log, while the tablet and smartphone were vibrant Rec. 709. “I had to meet somewhere in the middle for continuity,” he said. “As always, I used DaVinci Resolve Studio’s stills gallery and wipes to fine tune. I also had to keyframe the color on the motion shots due to the cameras’ changing color in different light. We went for great skin tones and realistic color that popped and would show well on broadcast, regardless of what the show’s overall colorist did on top of our grade.”