Studio Technologies is allowing production personnel, team coaches and fans to hear what the players are discussing during game play.

An important production aspect of professional eSports tournaments is being able to support the range of player audio needs. Unique to these events is the requirement of capturing interplay communication while also maintaining the integrity of the game. The Model 207 eSports Console from Studio Technologies helps to make eSports events more compelling by opening the lines of communication, allowing production personnel, team coaches and fans to hear what the players are discussing during game play. The solution also provides the added benefit of preventing teams from hearing their competitors or the event commentators.

The Model 207 is optimized to address the microphone, headphone monitoring, and personal computer audio interfacing needs of eSports players. Housed in a compact, tabletop enclosure, the unit incorporates both analog and Dante® audio-over-Ethernet technology to allow direct integration with a player’s headset, gaming computer, and Ethernet-based audio network. In just minutes, an eSports player’s location or “position” can be integrated into a sophisticated live event application.

The Model 207 operates on the Dante network and the intercommunication audio feed can be tied into the game play with the audio following the video while switching between the game play feeds. One of the main benefits of the Model 207 is its remote-control capabilities, as operators can control the Model 207 from a workstation on the network.

“A strength of the Model 207 is its ability to be configured using our STController software application,” says Gordon Kapes, president of Studio Technologies. “Once connected to the LAN by way of PoE Ethernet ports, a technician can use STcontroller to quickly establish each unit’s operation characteristics or load a pre-set configuration file. Any required “on-the-fly” changes can be easily accomplished without needing to access the Model 207.” 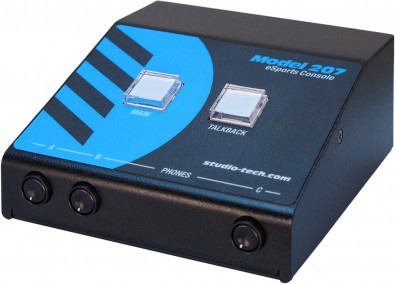 The Model 207’s talkback feature also helps with player-support personnel intercommunications during an event. From a workflow perspective, there are usually several administrators on the event stage that are responsible for making sure that the players have everything they need. Using the talkback feature, if a player is having an issue, such as with their mouse or keyboard, they can easily contact the administrators.

Using Model 207 units, or other Studio Technologies’ products, the administrators can communicate with each other and then back to the requesting player.

Studio Technologies’ Model 207 also supports a “masking” noise headphone feed. This feature allows an audio source, typically pink noise, to be “fed” to players at a fixed level with no ability to adjust the volume. Included for game integrity, this audio signal helps to prevent the players from hearing real-time commentary that may be present on a “house” sound system. The masking audio helps to keep play fair, shielding the players from being able to hear game strategy or related topics as might be discussed by the commentators.