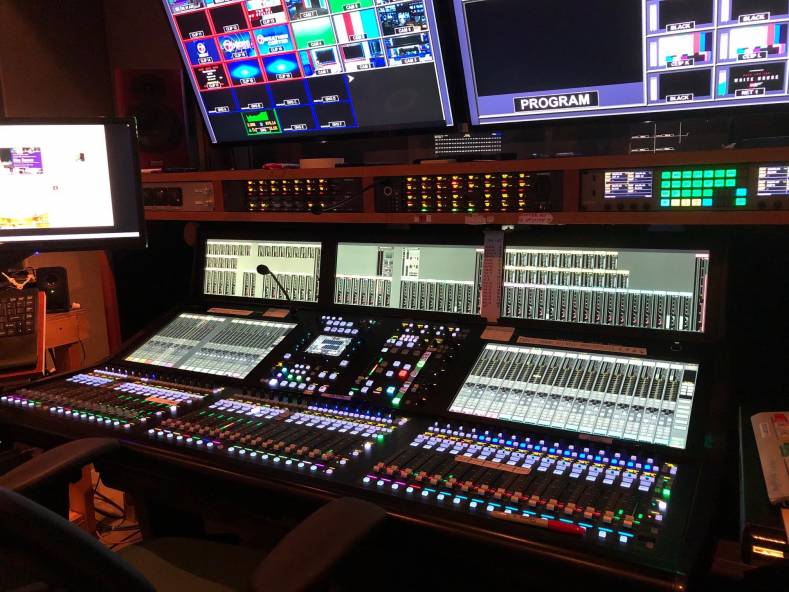 The new System T audio mixing console has replaced an existing SSL C100 console that had been in operation for 14 years.

“The C100 was fine and it met our needs, but it was coming up on its fourteenth birthday,” says Jim Shultis, Director of Engineering for WHDH-TV, where he has worked for well over 25 years. “The C100 has been a fantastic workhorse, but it was time to replace it and get on SSL’s current platform which is fully Dante compatible.”

When WHDH lost its NBC affiliation at the end of 2016 the station announced that it would begin airing more than 80 hours of news every week — an increase from eight or nine hours per day. As engineering assistant Art Murphy explains, the new Solid State Logic System T platform offers features and facilities that were attractive to a station offering so much news programming, such as the easy creation of mix-minuses for IFBs to the 7News talent in the field and in the studio.

“We have 24 mix-minuses going on. We could wire more if we wanted to but 24 is a good number for us,” says Murphy. Setting up the mix-minuses is a different procedure than on the C100, he says, “But once you get used to it it’s a little bit more logical, a more direct process.”

There are other attractive aspects of the System T, Murphy continues, including a similar aux bus setup to the C100. “And, of course, we’ve got plenty of processing power with what we’ve bought.”

The C100 was installed in a new control room back in 2006 alongside a new video switcher, says Shultis, just as the U.S. was finalizing the mandatory switch from analog NTSC to digital ATSC transmission. The video switcher was swapped out with another a couple of years ago. “But the C100 just kept going,” he says, adding, “It’s a much more difficult project to replace an audio console than a video switcher.”

But the native Dante capabilities of the new System T actually made for an easier install than the previous one. “We put stage boxes in our newsroom, where all our main mics are. So, all of our mic wiring became a lot easier, wiring right into those stage boxes,” says Murphy. “Then, we use Dante to bring those into the network switch. It really makes a much cleaner installation as well.” A second studio is used for production, he adds.

Operationally, the System T channel strip, with its assignable rotary encoder, is very different to the knob-per-function C100 strip. “It takes time to get used to, but once you do, it’s very flexible,” says Murphy. And that flexibility is key to the system accommodating multiple operators at the busy station, each of whom can configure the desk to suit their individual preferred workflows.

“One thing we do like is that we have one show file and a bunch of scenes,” elaborates Shultis. “The operator can load the main show file but then everyone has their own scene. So it’s really easy for an operator to come in and load their scene up and have the board exactly the way he or she wants it. And they load really quick. That’s a nice feature.”

There was one important reason why Shultis and his engineering team returned to Solid State Logic for a desk to replace the C100, as he explains: “Over those 12 or 13 years with our C100, SSL’s support was really fantastic. If we had to use our tiny back-up audio console it would really limit our show, so we really bank on the primary console. That made it a no-brainer to stay with SSL.”