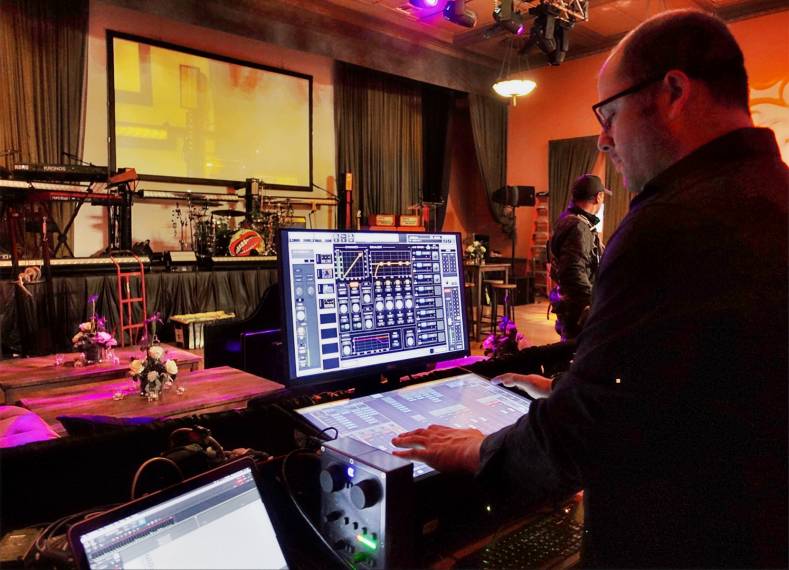 Friedlander’s workflow for the event included a two-screen up and down setup with one Waves Axis One custom-designed computer and one Waves SoundGrid Extreme Server-C, mounted in the new OCD Labs LiteFly housing system. His stagebox was the DSPRO StageGrid 4000, while running some local I/O (monitoring, record feeds) off of a DiGiGrid D.

“The band brought their touring engineers to help support the show, and we were able to set up the entire LV1 system in a corner of the green room, hours before our performance space was ready, in order for us all to program and patch inputs and outputs,” Friedlander said.

"Additionally, the monitor engineer was familiar with the LV1 as well, and after a quick call to bring in another server, he was up and running on his laptop, and with one connection of a Cat6 cable he was sharing the stagebox I/O with me to build IEM mixes for the band.”

Having access to the sonic tools from the Waves library, integrated into the mixing platform, allowed Friedlander to open up and attack his mix from a variety of angles, both creatively and practically. "I needed to tackle everything from removing noise and feedback on lectern microphones, to building an impactful but not aggressively loud drum mix for Anderson .Paak, while mixing a variety of broadcast mixes and instrument inputs in-between,” he said.