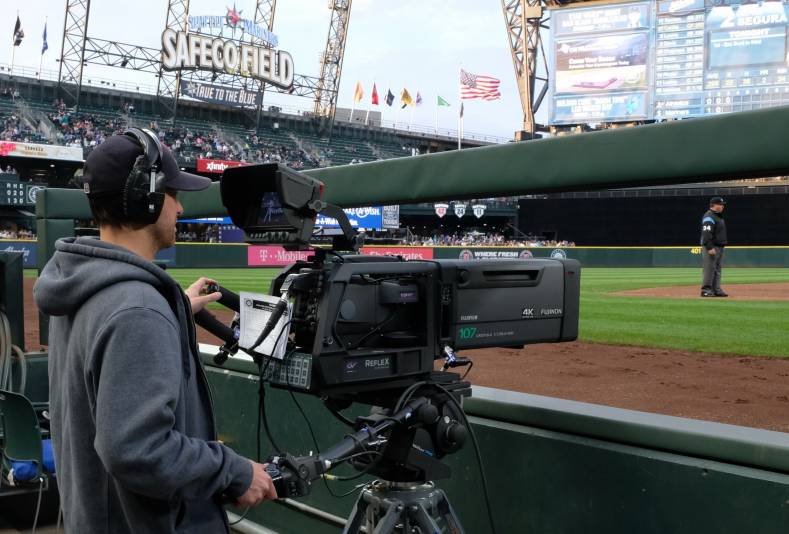 The increasing use of High Dynamic Range (HDR) and wide color gamut (WCG) acquisition has not only improved signal quality on live sports and other telecasts, it has also helped the bottom line of those that make professional 4K lenses. Both visual and lab tests have shown that the superior quality of a 4K UHD lens helps even HD cameras look better, and that’s helping lens sales in a Broadcast market that—with the emergence of handheld, fixed lens (with 1/3 and ¼-inch sensors) camera models now used extensively in newsgathering—gets harder every day.

Manufacturers Canon and Fujifilm (Fujinon) both say that a 4K UHD lens on an HD camera shooting in 1080p mode can look better than a native 4K camera and lens combination. New lens coatings and glass designs have helped the higher-end cameras’ 2/3-inch sensor—whether 4K UHD or HD—acquire more color detail. Of course, they also perform at their best with a 4K sensor.

“4K UHD lenses for HD cameras make a better picture because the lenses are sharper and this sharpness is maintained much better out to the edges, which is vital to 4K acquisition,” said Larry Thorpe, Canon Senior Fellow Imaging Technologies & Communications Group, Professional Engineering & Solutions Division. “The HD sensor immediately sees those improvements and chromatic aberrations are reduced as a result. That’s why a 4K lens helps make a better picture with an HD camera. The 4K sensor can see aberration that an HD sensor may not.”

Thorpe added that Canon is always investigating in new coating materials to improve lens performance. In 2019 the company introduced Air Sphere Coating (ASC) technology that was developed to enhance the anti-reflective properties of the lenses. Other lens coating technologies developed by Canon include Super Spectra Coating for reduced ghosting and flare and consistent color balance, and Subwavelength Structure Coating (SWC), which increases antireflective effectiveness against light entering the lens. 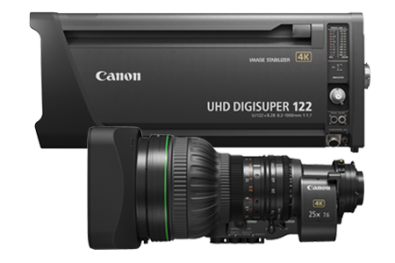 Used in conjunction with SWC, the new ASC technology functions to further reduce the occurrence of ghosting and flare. It enhances both the high dynamic range and wide color gamut capture capabilities of the lenses, which provides more natural images ideal for sports telecasts.

“Canon’s ASC coating is very good at solving the reflection problem, getting the blacks to be a deeper, richer black, which is crucial to good quality HDR acquisition,” he said.

It’s due to these advancements and other perceived market factors that Canon’s NAB booth this year will be exclusively stocked with its new 4K UHD line of professional broadcast lenses, from box-style zoom lenses to portable wide angle and everything in between. In fact the company now offers 12 different models—including six box lenses in HDR, one studio and five portable ENG types.

“We’re totally invested in 4K,” Thorpe said. “That’s what everybody’s buying. Nobody’s asking for an HD lens. It’s because customers see the advantages of a 4K lens on an HD camera and they’re futureproofing their business for the day they move to 4K cameras. And those who are looking at shooting 1080p are looking for higher vertical resolution than 1080i, a difference that is very visible to the eye. So, they want a lens that’s going to do justice to that.”

Fujinon said it still believes there’s a viable demand for HD lens, both in North American and other international markets, yet it understands the broadcast industry is moving forward with 4K acquisition—albeit slowly. That’s why it has replicated its HD line in 4K, with a portfolio of 16 4K UHD models that will be shown at NAB in April.

“We anticipate selling both HD and 4K lenses for the foreseeable future, “said Gordon Tubs, Vice President of Broadcast & Cinema Products. “4K itself is a resolution, talking about pixels. We think of 4K as much more than that. 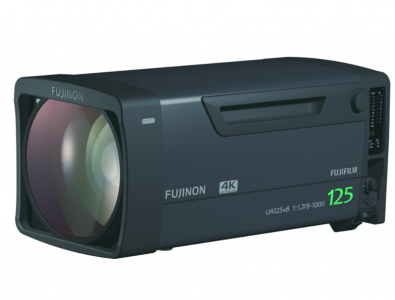 The Fujinon UA-125X8BESM is currently the largest zoom ratio lens on the market, but it also starts out at the widest angle (8 mm) of any long sports box lens.

“Resolution is one thing,” he said. “It’s not that hard to make a very high-resolution lens. What’s harder is to make the lenses capable of acquiring the adding color data of HDR. We can help the camera operator make a better image with the design of our lenses. We do that with the 4K lenses, which keep lens flares to a minimum. Also, increasing the contrast as much as possible. It’s cutting down on light that should not be making it through the lens (catching it in baffles that are designed into the interior barrels of the lenses), so that we provide as clean and high a contrast image as possible. This allows the camera to make a much better HDR image.”

The added cost of a 4K lens has also come down to the point that if you are looking to buy a new professional lens, it just makes economic sense to buy 4K. For example, if an HD lens today costs $36,000, it’s 4K equivalent might be $40,000 (list price). Both Canon and Fujinon said that this minimal difference in price has encouraged many production companies and networks to buy 4K now, while still shooting in HD.

To be clear, there are those that have begun outfitting their studios and live production systems with native 4K equipment. CNN purchased several Sony HDC-4300 4K HFR and HDC-P43 4K HD POV cameras with Fujinon UA27x65BESM large box lenses and UA24x7.8BERD portable lenses for its New York studios.

Native 4K production in live sports has increased considerably over the past year.

For those that own lenses, there’s a common knowledge that—except for ENG lenses that get beat up during daily use— each lens outlives two camera bodies, so there is a justifiable rationale to buy the best that you can afford at the time. You get your money’s worth.

In its NAB booth Canon will show its latest models in broadcast and cinema lenses. It will also show new lens controllers with a lot of sophistication in them.

“They have readouts and memory and all sorts of controls to improve production results,” said Canon’s Thorpe. “The whole idea is to bring cinematic-style control to broadcast lenses. That’s very important for those that do stage shows and they want to do precision focus on faces and other types of closeups. (like shooting an opera). If you want to do rack focus on two people on stage, it works beautifully.”

Fujinon will spotlight its own broadcast and cinema (Premista line) lenses at NAB 2020. For sports production companies there is a new 125x 4K UHD box lens, seen under glass last year. Tubbs said they already have sold a few; presumably for use at the Summer Olympics, although Fuji would not confirm. The UA-125X8BESM is currently the largest zoom ratio lens on the market, but it also starts out at the widest angle (8 mm) of any long sports box lens. And it could be pushed to an 8:2,000 mm with a 2X extender (2,000 mm).

The company will show a second lens, basically a modified version of its existing 107x lens, called an UA-107X8.4BESM-AF. This lens includes Advanced Focus capability and represents the first time a 4K lens has included auto-focus capability.

“We think that with 4K being adopted, depth of field is shorter than it was in HD, so for the operator focusing is harder,” Tubbs said. “This lets the camera operator be more precise in their focus ability. They can lock on a subject and the AF will follow that subject around the frame. It’s a brand-new design for 4K lenses.”

Adapting Lenses To A Changing World

It’s clear that the broadcast industry’s perception of 4K lenses is changing, so lens makers are adapting accordingly to meet customer expectations.

“There’s a core business centered on 2/3-inch lenses, those that believe in quality,” Thorpe said. “We’ve seen some purchases recently from the networks and mobile truck operators. [The 4K lens business] not huge, but we’ve got the right technology now and we’re holding steady.”

Editor’s Note: In anticipation of the Summer Olympics in Tokyo in July, both Canon and Fujinon will also feature 8K lenses—both box style and portable models—in their respective NAB 2020 exhibit booths this year.