Chang first tested the Cooke S7/i large format lenses on a project in early 2018. Based on those results, he frequently used the lenses on the final and mostly narrative centric shoot in Cuba — the personal stories – while breaking with the IMAX and giant-screen standard of avoiding close-ups.

“Cuba is focused on the beauty, spirit and character of this Caribbean country and its people,” said Chang. “One of the primary stories in the film centers around a young ballerina. I was really looking forward to using the Cookes as we knew we would be shooting on stage with challenging theatrical stage lighting, and breaking that sort of giant screen IMAX norm of not having any close-ups. That’s exactly what we did — shot some close-ups of her face, which came out beautifully.” 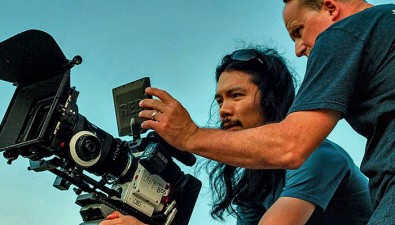 There are, however, challenges in shooting close-ups in terms of framing for such a large image, based on how it is projected.

“IMAX has flat screens that are typically used for 3D, and you also have dome theatres where you’re looking at the bottom half of a 1.43 image and then the rest of it is over your head and you’re not typically looking at that,” said Chang. “A close-up has to be framed in that bottom half or third of the image. With an image as big as we’re projecting — at times, 90 feet x 65 feet or more — a close-up can be rather jarring because you can see a lot of the imperfections on people’s faces, you can see the makeup on their skin and blemishes that can be unattractive, but I wanted to see how far we could push it with our ballerina to gain more intimacy.”

Chang’s use of the Cooke S7/i lenses for the character scenes did, in fact, pay off as a part of what makes Cuba such an engaging film for audiences.

“On IMAX and giant screens, the Cooke images hold up really well — both in terms of image quality and emotional impact,” said Chang. “Audiences have cried when seeing our more emotional scenes. The combination of characters, stories, setting, music...everything comes together for Cuba, and Cooke was an important part of that.”