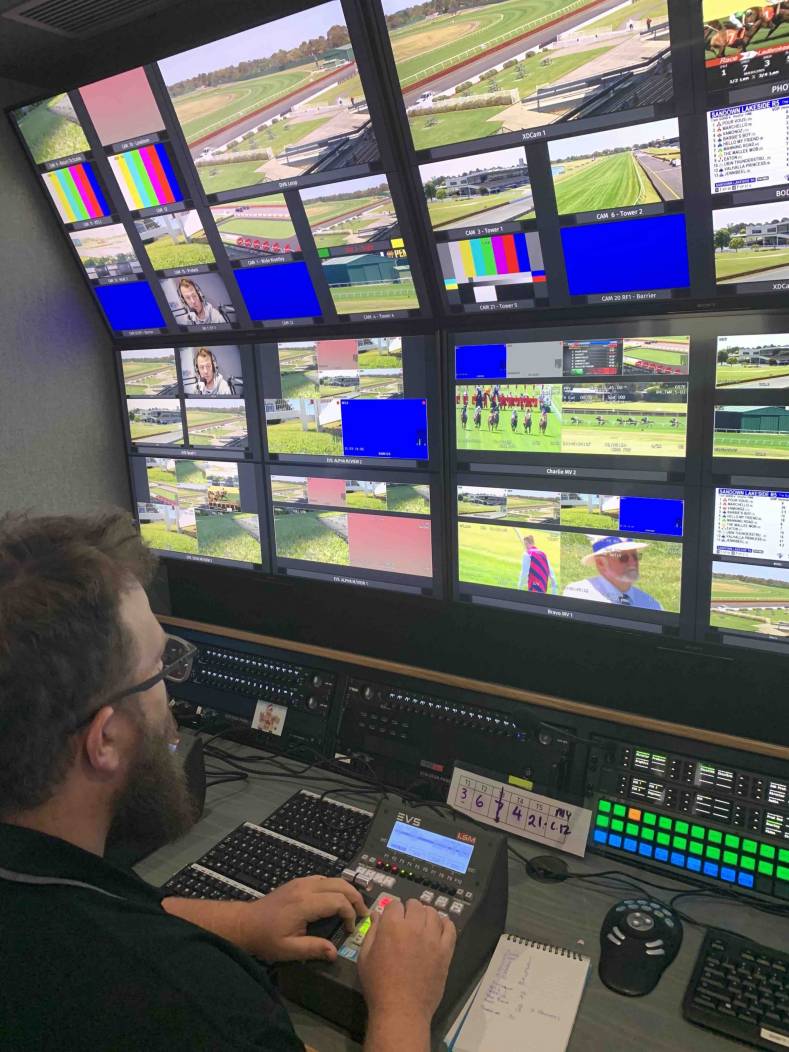 Solutions Sales & Proposals Manager Sony Australia, Tom Garvan, explained, “A key requirement for the new TRP OB van was to provide a scalable and modular solution that could be adapted to cater for various production requirements. To achieve this we needed a control and monitoring solution which could connect to the core system hardware using various protocols from different manufacturers to create a single unified control layer to the operators. We were looking for a proven solution which would meet our system needs at a competitive price with local support in Australia. Fortunately, we were able to obtain the Axon Cerebrum control platform after discussions and consultations from their reseller and partner Magna Systems & Engineering.”

During the pre-sales phase, the system was set-up at Magna HQ in Sydney and training was provided for the evaluation.

Sony and TRP already had some experience of using Axon equipment from when the companies came together to build TRP’s original OB van in 2008.

Garvan continued, “At that time we used Axon peripheral equipment which came with their Cortex software for configuration and control of the various Axon cards in the original system. We therefore already had confidence in Axon, but at this point had no experience of Cerebrum."

As Cerebrum provides the main user interface within the OB van, Sony and TRP needed confidence that the system would work reliably. They also needed guarantees that the level of local support and training would be comprehensive, so their relationship with Magna was critical.

TRP Engineering and Technical Operations Manager Charles Cole said, “We had demonstrations of a number of control systems which would match the requirements from a technical perspective. We started with the basics including tallys, UMD, router control, multi-viewer and monitor set up, PIP allocation and system monitoring, ticking them off one at a time. Cerebrum easily made it on the shortlist pending confirmation of local support and competitive pricing from Magna.”

The Cerebrum control system has an extensive library of supported control protocols, which included all the key equipment Sony and TRP had chosen for the system. In fact, their library was so extensive they were able to expand monitoring and control to additional systems, including environmental monitoring and power and UPS systems, which were not included in the original scope.

Garvan added, “Magna and Axon were then also able to provide commitments to providing config and commissioning services, as well as training and ongoing support to give Sony and TRP the confidence that the system would be well supported not only at install, but on a longer term basis.”

TRP uses the Axon Cerebrum Control System to control the core functions of the OB van. It monitors the video systems, power systems and the environmental systems. Cerebrum also gives TRP a simple, user-friendly interface to control their Riedel MediorNet router and can also control the vision in and the destination of the multi-viewers created in MediorNet. Cerebrum in turn supplies the UMDs and the tally systems as well as controlling the vision switcher mnemonics.

Cole continued, “Touchscreen control gives TRP the ability monitor the UPS status, the incoming power status and the temperature of each of the workspaces as well. The CCU overrides are also programmed by Cerebrum. With all the core systems under Cerebrum control, system snapshots for multiple equipment at multiple levels can be recalled at the touch of a button. Furthermore from an engineering perspective the system will monitor and alert error conditions, greatly easing the trouble shooting of issues caused by hardware or signal failures.”

According to Cole and Garvan the fact that this is an Australian first isn’t the most impressive thing about the Axon Cerebrum system, that honour goes to its ease of use and customisation and how smoothly the sale and install went.

Cole said, The biggest wow factor is the simplicity of the end user interface. It can be made as graphical as required to make the experience as simple as possible. The ability to make snapshots of the truck status, then save and recall it at a later date makes reconfiguring the truck very easy. Various emergency fail-over scenarios are also programmed into the push of a series of buttons, so that in a complex failover of the vision switcher for example, one button performs the failover of a router panel to the emergency switcher, resets the monitor wall, ensures all tallies are fully functional and that the correct feeds are still assigned to the correct outputs.”

During the early part of the commissioning it became apparent that the Cerebrum Modbus and SNMP control and monitoring support would allow Sony and TRP to tap into the OB van’s environmental and power monitoring systems. As a result Bob Ahlers quickly developed a GUI which showed environmental conditions in various areas of the truck with triggers set up to provide alarms if over-temperature conditions occurred – something that impressed all concerned.

Garvan said, “The way controls and information are presented to the end user are restricted only by the designer’s imagination. New panels and interfaces can be developed off-line using the Cerebrum Designer tool before being applied to the system. Unique interfaces and button layouts can be developed depending on operator roles and responsibilities.”

According to Charles Cole as a result of integrating Axon’s Cerebrum system TRP’s new flagship OB unit has been an unqualified success as he explained, “The Director, EVS ops and audio op can all route and change layouts of their monitor walls themselves. CCU operators now can have a fully flexible layout in both monitor and RCP panel assignment and the senior vision operator can customise the complete layout to best suit the operational conditions on any given day. I was quite nervous about jumping headfirst into an overall control system for our new facility but I am pleased to say I could not be more delighted with the result. We have been able to deliver more to our stakeholders with little or no effort during the Spring Racing Carnival this year and this is a testament to Sony, Magna, Axon and the Cerebrum platform."

AI & The Future Of TV Engineering