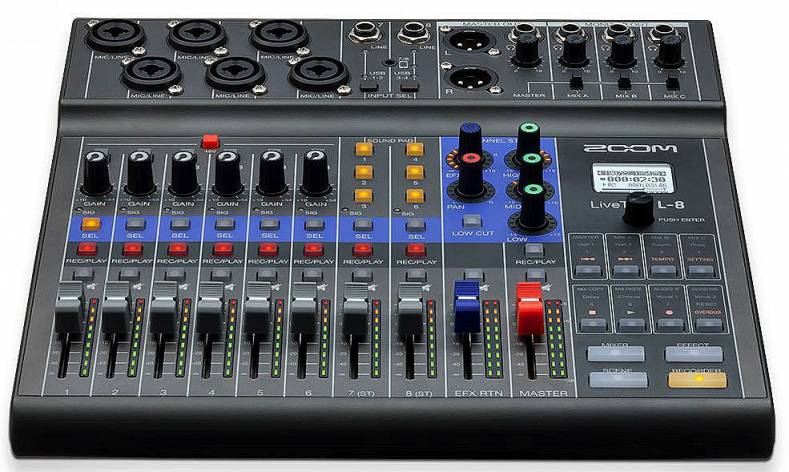 The Zoom portable mixer/recorder has six XLR — 1/4-inch mic/line channels with +48 volt phantom power, ten faders and multitrack recording via both SD card and USB to a computer.

With six transparent mic preamps, battery power, mix-minus functionality for VoIP and the ability to record to both SD cards and computers at the same time, the L-8 is a board perfect for podcasters on the go.

Specific to podcasters are features like six sound triggers to store sound effects, individual headphone feeds for each participant and a mix-minus jack to record phone interviews. Just plug a phone with the included TRRS cable (digital adapters available separately), and record.

Mix-minus means phoners won't hear echo or feedback on their line. When recording from a computer, using Skype or other app, loop that audio into a USB channel, where it will be recorded to the podcast.

Each channel gets its own digital three-band EQ. The L-8 provides seven scenes. Users can record podcasts with one crew of people, capture music with another, save EQ settings for each crew and switch between setups with the click of a button.

For music recordings, the board also handles keyboards, basses and electric guitars directly to SD cards or computers. The L-8 can be used in small live venues to mix concerts, cue monitor mixer and push sound to the house speakers.

The L-8 is battery powered. Four AA batteries can run the board and all of its features for 2.5 hours. An AC adapter is included. It can also be powered by a USB battery.