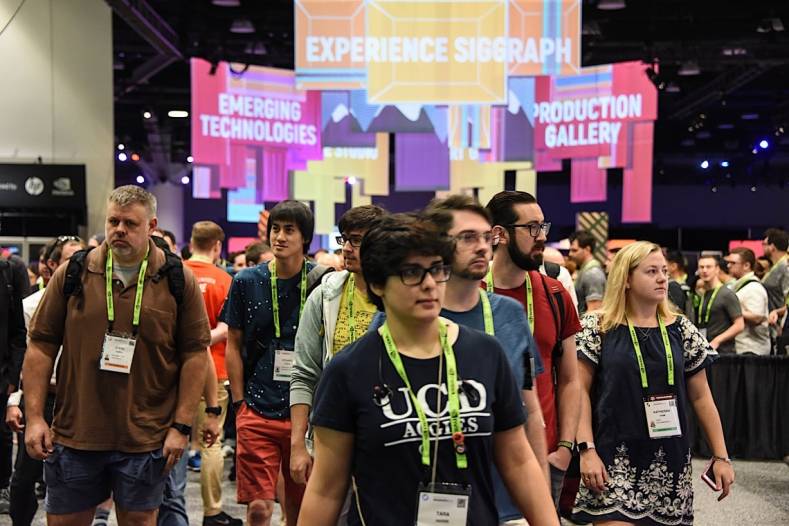 SIGGRAPH is where youth is not wasted on the young

The L. A. Convention Center was barely big enough to hold all the computerized creativity unleashed at this year’s SIGGRAPH event.

Yesterday we took our first foray into the wilds of the imaginations on display at SIGGRAPH.

But there is a lot more to come. 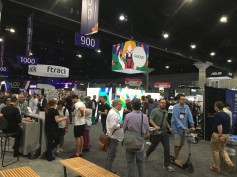 With an open mind, at this convention all roads lead to Oz.

There’s hardly a Hollywood blockbuster that doesn’t involve some c.g. wizardry from The Foundry, so when I met with Mathieu “Matt” Mazerolle, senior product manager for The Foundry's Athera, we began by talking about this new collaborative cloud platform.

“Athera lets you start a studio anywhere in the world with just a laptop,” Mazerolle began. “All the security, connections, rendering power you need are available and you just pay for what you use.”

Launched last year, Athera has grown quickly as a StaaS (Studio as a Service) among freelancers in the last 6 months. 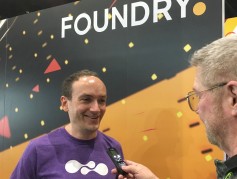 “Even though it’s only been a year on the market, we’ve been working for over 5 years to take the technical hassles away from the user and make it as easy as possible for anyone to use Athera,” Mazerolle said. “What we are talking most about at this show is how people can form pop-up studios to enhance their work/life balance by adopting Athera.”

As I was walking by the rather modest booth bannered with the Golaem name, my attention was caught by the 2019 Emmy statuette they were displaying. As Nicholas Chaverou, product manager at Golaem, explained to me, it was awarded for their Golaem Crowd software, heralded by the National Academy of Television Arts & Sciences for being “cost-effective crowd simulation tools”. 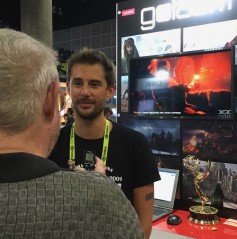 But I soon learned it was not just this nifty plug-in for Autodesk Maya to generate controllable characters crowds that sets them apart.

They also have an insane marketing strategy.

“We know freelance computer animators are always strapped for time and funds, so we created our ‘Personal Learning Edition,” Chaverou explained. “With that you can learn the software for as long as you want and even create projects right up to the finishing point with complete access to the full set of tools. Only when you want to render it out do you have to pay for the license.”

That means you don’t have to ante up until the project is approved and you, presumably, are going to be rewarded for your efforts.

“Or, if you are creating something for your own personal reel, we’ll provide a license for free as long as it is a non-commercial project,” he added. “This goes for academics and festivals, too.”

Wiser heads will avow they’ll never get rich that way. But they did earn an Emmy. And my admiration.

Finally, the afternoon chronometer rolled around to my scheduled appointment with the Looking Glass Factory inside the Intel booth, one of the reasons I’d ventured to the L. A. Convention Center in the first place.

I wanted to get a look at a real live hologram. 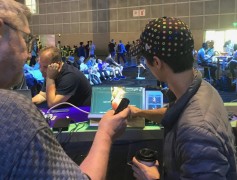 Jay with the Looking Glass Factory's CEO, Shawn Frayne, zeroing in on the elusive hologram

I’d been frustrated a month before when a SMPTE seminar that promised to reveal one had forbidden photographs, and without pix to prove it I’m never sure what I saw was real.

But there it was, in all its free-standing, three dimensional glory-a full color hologram created from 45 perspectives, or imaging “pairs” in a 45-degree viewing zone. 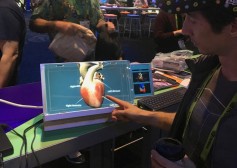 Imagine what a surgeon could do with this moving, volumetric imagery

“We make genuinely, super-stereoscopic, volumetric images you can see without a VR headset,” Shawn Frayne, CEO of Looking Glass Factory, told me, “although they are technically referred to as light field displays.”

Even more impressive than the illusion of thickness and form was the fact that the heart we were looking at was actually beating!

Since the imaging view pairs were so tight together, there was none of the “jumping” experienced when looking at other so-called glasses-free 3D displays.

“This was created using our Unity SDK,” Frayne told me, "People can also bring in real world content with 3D cameras, although that is pretty experimental now. In addition, since the front screen is touch sensitive, you can interact with the image in real time.”

Had there been an animated character in the Looking Glass, you could even play with it.

“If you have a 3D model, in this case a beating heart, you use our Unity SDK or our Animation Importer to get it into our Looking Glass display,” Frayne said. “Or, like the two animation pro's we have here at SIGGRAPH, you can create volumetric music videos. The ones we are showing here were made at Intel Studios and modified with our Studio SDK and then exported as a program that runs inside our Looking Glass display.”

I had indeed donned a VR helmet at the Intel booth's entrance to see an animated version of the title song “Grease”. Sure, it gave me a god’s eye view of teeny tiny 50's teens dancing, but it was only a visual gimmick next to the hologram.

Just to whet your imagination, the Looking Glass software will let you tile up to 8 of these cubes together to make a substantially larger single volumetric image.

Still with bezels, of course. But they said this couldn’t be done, either.

Those who want to see considerably more Looking Glass holographic images can take a tour with their CTO, Alex Hornstein, in this You Tube video.

It’s a lot easier than stumbling around the L. A. Convention Center.

But nowhere near as much fun as SIGGRAPH.