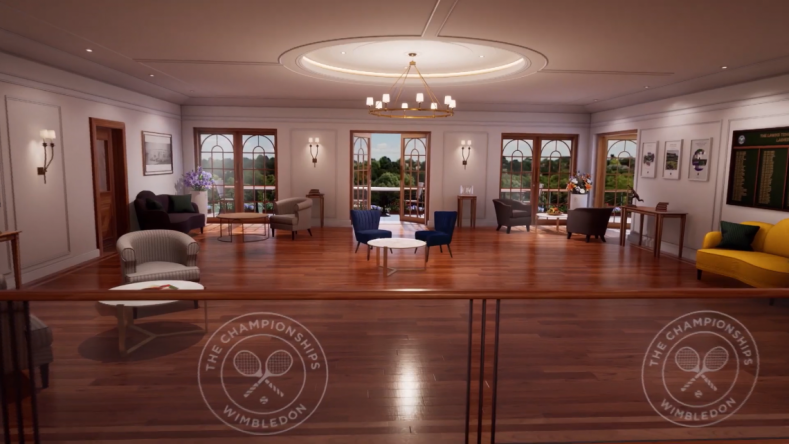 Graphic specialists MOOV created an impressive photo-realistic virtual set for post-match interviews featuring the likes of Roger Federer, Cori Gauff, Rafael Nadal and this years’ Wimbledon winner Novak Djokovic, and call the creation a Virtual Studio. Situated in the media center, the Virtual Studio composites presenters and tennis players into a virtual interior designed to look like the historic club.

MOOV was recently awarded a three-year contract by BBC Sport to provide graphics for all of their live tennis coverage, which includes the Fever Tree Championships at Queen’s Club, The Nature Valley International at Eastbourne and the Nitto ATP Finals, to be held at the O2 in London later this year. The contract also covers the On-Screen Graphics and Augmented Reality Graphics in the iconic BBC Sport Studios at the Wimbledon Championships.

The Coolest Room That Doesn't Exist

With limited space across the Wimbledon grounds, a Virtual Studio offers the most practical and flexible solution for Wimbledon tennis coverage. New for 2019, MOOV designed and created a Virtual Studio in the TV Interview Room, turning what was a rather plain, underused room into a world-class facility appearing to be a grand stage inside the Wimbledon Clubhouse, overlooking the outside courts.

The production chose to use the Mo-Sys StarTracker camera tracking system for reliable and ready-to-go daily coverage. Precision camera tracking was critical to create the Virtual Studio magic.

StarTracker provides unlimited freedom of movement and gives accurate position, rotation and lens data in real-time, and ideal for Steadicam and handheld. A studio camera can be rotated 360 degrees and moved to any position in the studio, even right to the edge, as long as enough “stars” on the ceiling are in sight of the tracking camera. Other systems are often restricted in their tracking volume. StarTracker can track in 3m to 20m high studios.

The Mo-Sys StarTracker is a robust precision camera tracking system which uses small retro-reflective stickers, known as stars, that are attached to the ceiling. The sensor uses the position of the stars to gather reliable and precise tracking data, enabling the studio cameras to be moved when overlaying augmented graphics or using a full virtual set. 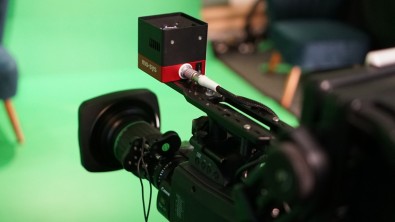 MOOV is the first UK company to adopt Future Group's Pixotope solution for use on virtual studio and augmented reality graphics projects. MOOV uses Pixotope to create a beautiful room full of detail modelled from the Clubhouse and surrounding rooms. The only thing real in the 4m x 4m green screen space are two blue chairs. Even the table is virtual. The backdrop through the windows is a live, direct view from the players balcony looking over the outside courts.

Pixotope uses Epic Games’ Unreal Engine to produce photorealistic rendering in real-time. The combination of Unreal Engine and Pixotope enables designers to rapidly create virtual sets, virtual environments, and augmented content, with terrain and foliage, with particle systems such as rain, smoke, fire, hair, cloth, explosions and the like, and with simulated camera and lens properties such as lens distortion, depth of field, and chromatic aberration.

Pixotope provides a powerful combination of performance, flexibility, photo-realism, and creativity, designed specifically to simplify the virtual production creative process. It is the only system on the market that offers native Unreal rendering with WYSIWYG editing, providing the highest quality photo-realistic graphics that can always be modified quickly.

Nev Appleton, director and co-founder of MOOV said: “It’s really important for MOOV to continue investing in the latest and best technologies, ensuring our clients have the right solution for their project. Choosing StarTracker was a no-brainer, as we found it to be an incredibly reliable and accurate tracking solution. Together with Pixotope, which is designed with creativity, speed and flexibility in mind this is the perfect combination for our constantly changing needs”.

Michael Geissler, CEO Mo-Sys said: “We are extremely excited to be interfacing our tracking and new lens calibration method to Pixotope for the first time. We look forward to being part of their upcoming projects and pushing boundaries with it.”

“We’re delighted to be working with MOOV and Mo-Sys on this year’s Wimbledon coverage. Pixotope was designed for exactly these types of live ‘to air’ productions, where the customer demands photo-realistic virtual content, an ‘always live’ editing capability, and an operational interface built for speed. Pixotope is the natural result of a talented engineering team and an award-winning live events creative team coming together to produce a new type of virtual production system” says Halvor Vislie, CEO The Future Group.