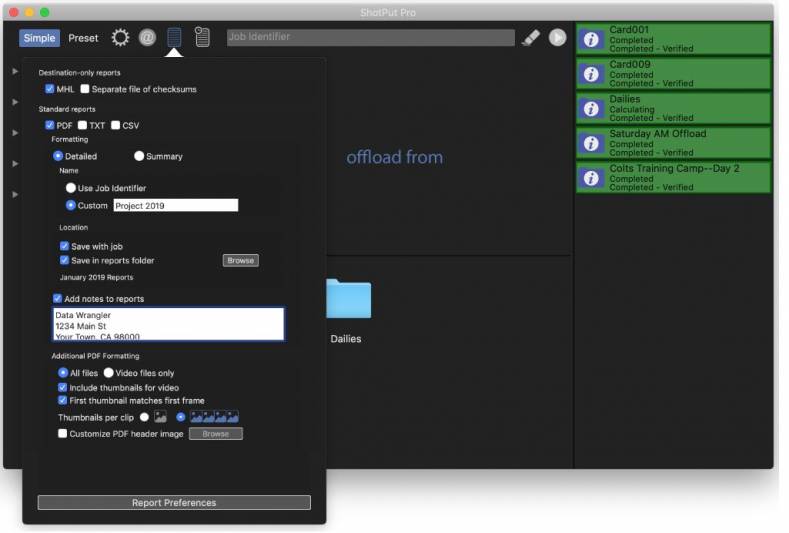 Imagine Products is the creator of software utilities for backing up, viewing, sharing, transcoding, and archiving video assets.

ShotPut Pro is preferred by more than 50,000 people worldwide and many major motion picture companies because it enables reliable and secure offloading of media. The series of new features and capabilities in ShotPut Pro Mac 2019 supports handling of various file types, enable versatile reporting, and simplifies offloading for anyone in charge of data management.

New benefits of the ShotPut Pro Mac 2019.2 update include:

Available as a free download from the Apple App Store, Imagine HQ iOS app gives users the freedom to walk away from their computers to perform other tasks or just grab lunch with the crew as media is offloaded with ShotPut Pro. As long as both the computer and the user’s iPhone or iPad are connected to the internet and logged in under the same username, the new Imagine HQ app can provide remote access and real-time status reports.

“Customer feedback is always the central factor when we make changes and add features to any of our apps,” said Michelle Maddox, marketing director at Imagine Products. “We feel it is vital that our products be able to adapt to the varying requirements of different users, and the newest enhancements to ShotPut Pro – including integration with the new Imagine HQ iOS app – reflect our commitment to giving our customers the tools, performance, and flexibility that can make their lives easier.