The Axia iQx console combines its mix engine and surface into one compact unit.

Seeking to streamline their workflows, professional producers are quickly adopting recently completed industry standards for distributing audio signals over an IP infrastructure in order to leverage the benefits of flexibility and the ability to use different companies’ technology on the same network. Veteran technology suppliers like Telos Alliance have begun to implement those standards into its Intercom and audio mixing products.

John Schur, President of the Telos Alliance TV Solutions Group, said that now more than ever, customers are demanding comprehensive solutions over products and partners over single proprietary solutions from a manufacturer. As IP workflows have now become standard in the pro AV industry, the Telos Alliance is focused on addressing this market need; including delivering communications and mixing products that support an IP backbone.

To this end, Telos Alliance has developed the Telos Infinity Intercom platform and the Axia iQx IP audio mixing console.

In 2003 engineers at Telos Alliance helped develop the AoIP standard for the broadcast market, but it has become clear that its Infinity matrix-free IP intercom can also help customers in the Pro AV space—including applications for House of Worship, Esports, Education, Hospitality, Live Venue and Security.

More than just a talkback system, the Telos Infinity IP Intercom converges voice communication and contribution audio on a single IT backbone that employs the latest standards-based VoIP and AoIP transport methods to provide dedicated features and functionality without compromise or limitations.

The company recently announced new updates to the Telos Infinity IP Intercom platform that include Infinity Link, which provides site-to-site connectivity over a WAN and the Internet. Built on the latest standards-based VoIP and Livewire+ AES67 AoIP protocols, this design provides more capacity as the system grows, eliminating previous concerns about running out of ports on a matrix. 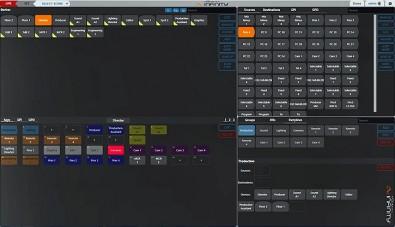 The Infinity Dashboard Advanced software is designed for intercom systems of all sizes and applications.

Also new to the Telos Infinity platform and designed for intercom systems of all sizes and applications is Infinity Dashboard Advanced. This optimized configuration and system management tool has an extended feature set that includes SAP/AES67 advertising and discovery and offline configuration.

The Telos Alliance has also addressed IP audio mixing with its new Axia iQx IP audio console. Traditionally, surfaces need to be connected to a separate mix engine, the so-called “brains” of the system. The Axia iQx combines the mix engine and control surface into one unit. This approach makes the iQx far easier to set up while utilizing existing network resources. In fact, the console can literally support up to 16 million sources and connections, according to the company, on an IP network.

The iQx console is ideal for non-traditional audio setups, such as a temporary studio for a special event, mixing remote audio, and as a backup TV console. Designed for AES67 and ready for SMPTE ST 2110, the console allows integrators, installers, and consultants to bring in sources from all over the world. The iQx can also be controlled from a remote site.