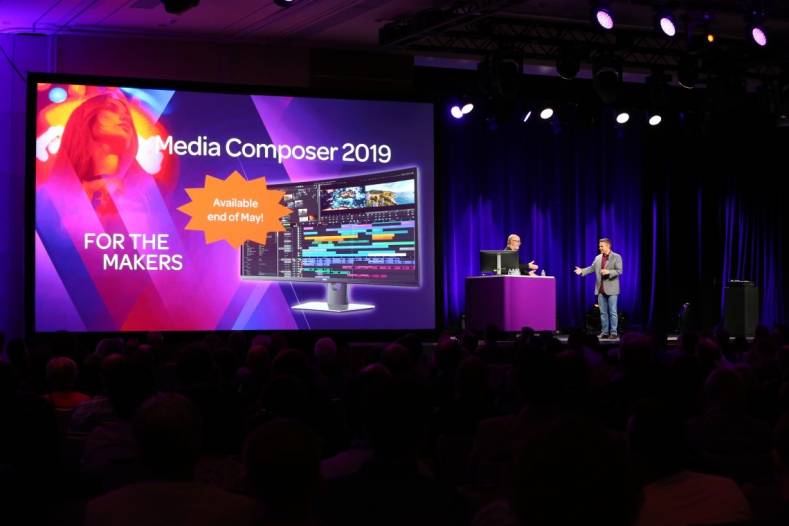 The new Media Composer 2019 will give editor new capabilities for creativity and finishing.

Under the mantra, “Rethink, Reinvent, Repeat”, Avid made good on past promises, improved new systems, and showcased the new Media Composer at the Saturday NAB 2019 press conference.

When Jeff Rosica, president and CEO of Avid, took the stage of the Orovada Ballroom in the Aria Casino on Saturday to give the 2019 press conference keynote, not everyone knew that after a remarkable litany of significant upgrades to existing systems and self-proclaimed "disruptive" introductions of new post production innovations, he would surprise the 33,000 members of Avid Connect by announcing a whole new version of their flagship NLE, the Media Composer 2019.

I asked Rosica why Avid felt this was the time to make this move. 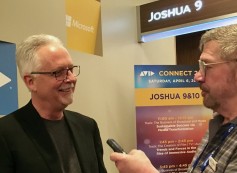 “We heard loud and clear from the Avid community that they wanted us to modernize the product, so we took that challenge plus a little bit more,” he said. “We added some features that will help everyone from the creative person just starting out to the largest enterprise to make sure we brought this iconic product to the state of the art and really, truly leapfrog our competitors.”

I’m sure you are going to be seeing all of the new features of Media Composer 2019 dissected by every outlet covering post production, but one of them that struck me as most significant was mentioned almost in passing—the ability to create an IMF "Interoperable Master Format" file (proposed SMPTE ST-2067) directly from the new editing user interface.

After all, for many of the new age content providers you can’t submit a master deliverable without an IMF file accompanying it.

“Yes, it’s big,” Rosica agreed, “IMF is really important for many distributors from Netflix to the big broadcasters who are trying to improve their supply chains. That’s why creating an IMF file is now directly accessible from our new Media Composer’s GUI.”
This is just one example of the new Media Composer’s ability to perform, as successive presenters pointed out, “at the speed of creativity”.

The re-designed GUI has a paneled interface to reduce clutter. Inside there is a next generation media engine providing more video and audio streams, background rendering, and the ability to add distributed processing so you can turn your unused old computers into an ancillary rendering farm.

With a 32-bit full float color pipeline, users can now finish in 8K, even 16K, or HDR without leaving Media Composer.

Recognizing that production teams are growing larger, there is a new Media Composer | Enterprise that assigns appropriate role-specific access to each member of the team through administrative control—loggers can log but not distribute, editors can do anything, but producers can only view, etc.

Among the new systems supporting the NLE throne were Avid NEXIS | Cloudspaces, empowering Avid NEXIS storage systems with cloud expansion, and Avid Maestro Graphics whose capabilities are embedded seamlessly into the convergent power of the MediaCentral | Cloud UX ecosystem.

Its output can be archived into and recalled from the MediaCentral | Asset Management system and put to use in the Maestro | News graphics templates for Maestro | News.

Also shown was a new version of the Maestro | PowerWall video wall display and management system and, for data-driven virtual graphics in an end-to-end live sports production system based on an image-based camera tracking module, Maestro | Live.

As a final surprise, Rosica sprung an “Oprah Moment” on the audience, asking them to reach under their seats.

There was an envelope containing a certificate providing each attendee with a one year free subscription to Media Composer 2019. 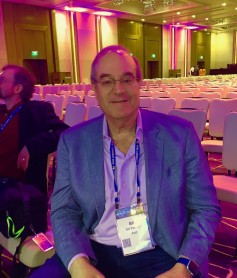 Bill Warner--stand up when he walks by.

But the real gift that had been given to the to the post production community was sitting in the front row next to Rosica--William J. Warner, the founder of Avid Technology, Inc. and the fountainhead of nonlinear editing, on his first visit to NAB after 30+ years.

Warner invented the Avid Media Composer in 1987 (US Patent No. 4,970,663), and is about to be inducted into the National Inventors Hall of Fame.

For editors everywhere, he is the greatest gift of all.