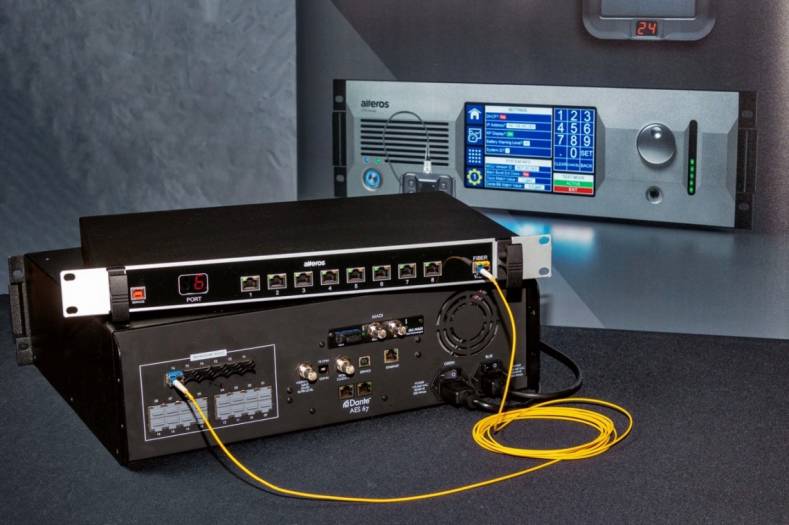 Alteros, an Audio-Technica Company, said the standard GTX system allows up to 32 GTX32 transceivers to each be connected to a 3U GTX3224 control unit with up to 1000 feet of Cat 5 cable, creating a L.A.W.N. (local area wireless microphone network) system to communicate bidirectionally with up to 24 GTX24 wireless microphone transmitters – 24 microphone channels and 24 talkback channels with an additional eight group channels.

With the introduction of the GTX3224F control unit version, 16 rear-panel Cat 5 transceiver ports are replaced with six fiber ports. Fiber connections measured in miles instead of feet can connect the control unit to up to six GTX-FX8 8-port fiber breakout nodes for remote Cat 5 connection to the network and power for to up to 48 GTX32 transceivers (up to 16 GTX32s can be connected directly to the GTX3224F by Cat 5 for a total capability of 64).

The result is a system that can cover extremely large venues, and multiple locations within a venue, as was proven with ESPN’s successful deployment of the Alteros Direct-to-Fiber GTX system for coverage of the 2018 US Open Tennis Championships.

While other manufacturers of wireless systems are beginning to deploy RF over fiber, those systems require an RF to fiber conversion. “Any time there is a conversion,” said Green, “the system suffers from possible jitter, resolution degradation, signal loss, increased latency and generally negative effects on the sound quality. Our system is already natively digital, and we communicate directly without the need for conversion and the potential for negative conversion artifacts. Using our wireless microphone system over fiber will result in sound quality at the system output that is superior to RF over fiber and even over direct-wire analog.”

Given the sweeping changes in RF allocations in the television spectrum, where traditional wireless microphone technologies are facing a spectrum squeeze, the Alteros GTX system provides fresh innovation and solutions. Operating in interference-free spectrum using true-digital, UWB pulse signals and state-of-the-art MESH and network technology, solid and reliable performance is achieved with no continuous carrier and no intermodulation distortion.

A 500 MHz signal bandwidth allows uncompromised and unprecedented sound quality. With the addition of the Alteros direct-to-fiber system, GTX technology can now be applied to an enormously extended range of applications.