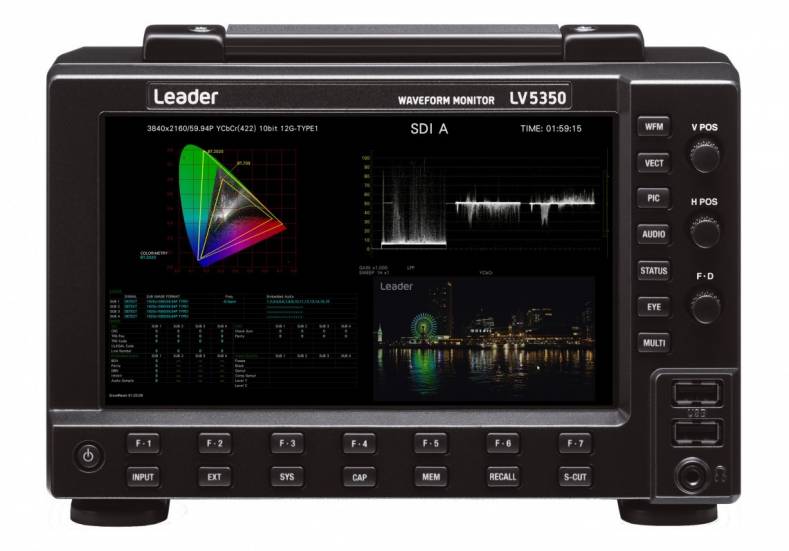 New Leader waveform monitor and its rasterizer equivalent instrument are built for those not yet needing IP measurement capabilities.

Leader Electronics Corporation has expanded its ZEN series of test and measurement instruments with the European debut of the LV5350 portable 12G/3G/HD/SD-SDI waveform monitor and its LV7300 rasterizing equivalent at IBC 2018. The LV7300 rasterizer offers exactly the same capabilities as the LV5350 but in a low-profile 19 half-rack-width 1U form-factor for easy rack or desk mounting. Eye pattern display is available as an option for this model.

The LV5350 waveform monitor and LV7300 rasterizer incorporate all the SDI facilities of the top-of-the-range LV5600 and LV7600 without the IP measurement capabilities required by only a minority of production and post-production teams. SDI-only features include engineering-related functions such as test pattern generation, closed-caption monitoring, CIE color chart, HDR measurement, focus assist, customizable screen layout, tally interface, 4K/UHD operation and 12G-SDI interfaces. The LV5350 and LV7300 also incorporate Leader's popular CINEZONE and CINELITE which are familiar to many camera crews, editors and colourists. A new focus detection algorithm enables the two instruments to sense edges across a very wide range of image contrast levels.

“IP, 4K/UHDTV and HDR innovations are currently grabbing the headlines but the vast majority of broadcasters are still transmitting in standard definition,” says Leader’s European Regional Development Manager Kevin Salvidge. "Our new ZEN series offers a like-for-like replacement for their ageing standard definition products while at the same time providing a cost-effective upgrade path to high definition and beyond should their business require it in the future."

The LV5350 is capable of operating on AC or battery power. Getting the levels right at the point of capture obviously retains much more picture detail than relying on corrective adjustments being applied during post. With the addition of the CIE color chart, we anticipate the LV5350 becoming the de-facto on-set test and measurement tool with the LV7300 achieving the same for UHD/HD/SD-SDI post-production studios."

Leader's popular CINEZONE and CINELITE are integral to each model, allowing camera settings to be optimized quickly and easily between shoots or during a live session. All features are accessible from the front control panel augmented by a 1920 x 1080 resolution 7 inch touchscreen TFT LCD monitor.