MultiDyne’s new hand-portable DogBone model integrates a power supply, which untethers users from the constraints of working with wallwarts and crowded powerstrips to manage connections. Customers working in mobile production and fixed studios can now directly connect to an outlet with a conventional line cord, creating a cleaner and more manageable production environment.

The DogBone accommodates 12G and 3G SDI transport as a single, dual or bi-directional transceiver, along with data, sync and Ethernet. The unit’s Ethernet extender also integrates a two-channel switch to support two streams.

The DogBone is also useful for emergency patches. Its quick setup and portability gives broadcast teams an added layer of in-field protection in the event of technical problems elsewhere in the infrastructure. 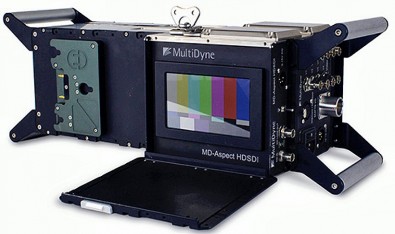 With the BullDog II users can change video signal counts from one event to the next by adding or removing cards. At the same time, new cards can be inserted to increase audio density or Ethernet capacity, among many additional signals and applications.

It is initially available in three different frame sizes for applications from single-camera standup interviews to the largest-scale sporting events, with additional frame sizes to follow.