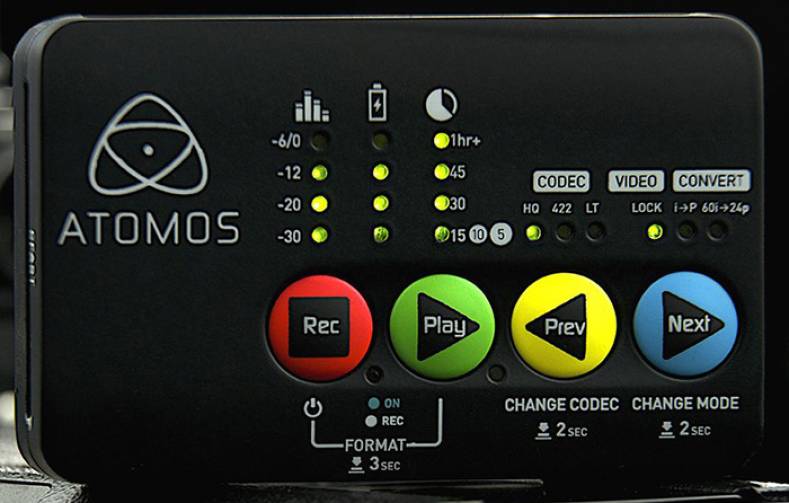 The Atomos Ninja Star is a 4.6 ounce Apple ProRes-capable video recorder that’s so small it easily finds a home in a quadcopter or in the smallest, most portable DSLR configuration.

Sometimes the simplest, most compact and least expensive solution is the one that works best. That could be said of the Atomos Ninja Star, a 4.6 ounce Apple ProRes-capable video recorder that’s so small it easily finds a home for quadcopter or multicopter aerial video, in a high-speed action shots or in the smallest, most portable DSLR configuration.

And the price is right: the Ninja Star costs only $295 complete not including storage media. Complete means it comes with a carry case, battery, charger, Cfast card reader and mounting cheese plate.

The Ninja Star allows DSLR users to escape from the post-production quirks of shooting video at 30Mbps using MEPG compression. It transforms the same camera set-up to 220Mbps 10-bit Apple ProRes HQ for high-quality color grading and other tricks in post. The uncompressed video is captured at the HDMI video output from the camera. Because the Ninja Star is designed for constant movement and extreme portability, CFast cards are specified for storage media. 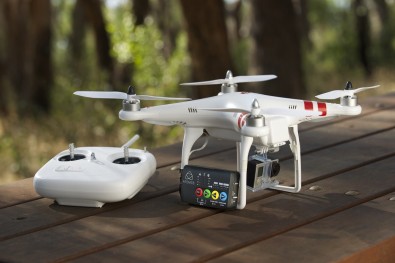 The Ninja Star easily mounts on a small helicopter or DLSR camera.

CFast cards have been proven to offer stable and fast read/write speeds. Atomos brands two CFast cards for the Star — one is 64GB ($159) and the other is 128GB ($239). These are CFast 1.0 cards, which are plenty fast enough for the Ninja Star’s high-definition recording system. The Atomos 128GB card can store up to 80 minutes of ProRes HQ recording.

Newer, but more expensive 2.0 CFast cards, also work in the recorder and offer much longer recording times depending on the storage capacity of the card. These 2.0 cards are available in sizes up to 256GB. With the largest card, the user gets two hours and 40 minutes of Apple ProRes HQ recording.

As an added bonus, recording straight out of the camera’s sensor via HDMI means all arbitrary limits on recording times are eliminated. Star users can record the full capacity of the CFast card rather than the limits imposed on the internal SD flash cards in the camera.

The Ninja Star is not a monitor, so it has no video display screen. It is a basic video recorder with the dual function of capturing up to 1080/30p resolution video via the HDMI output from capable cameras and playing it back. It uses edit-ready Apple ProRes HQ, 422 or LT codecs at 10-bit with 4:2:2 color sampling.

The Ninja Star was designed for limited functionality. It’s an inexpensive, basic way to beat the compressed video in many DSLR that can be so difficult to use in post-production suites.

Though pocket-sized and low in cost, the device does not skimp on necessary features. It has time code and start/stop trigger support, an audio line-in connector and an HDMI loop-through output for sending the signal to an external monitor. A lithium-ion battery with a five hour capacity and charger come included in the package. 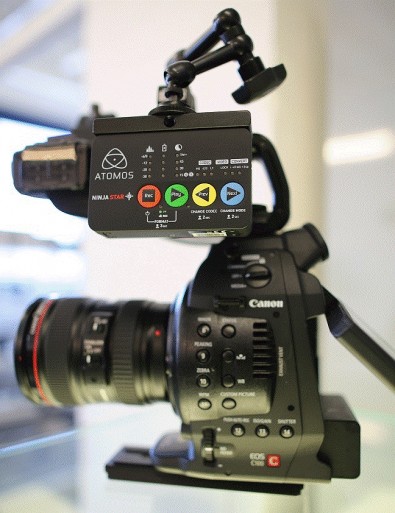 Ninja Star mounted on a Canon 100 camera. All controls are easy to see and have adequate-sized buttons for control.

For attachment to the camera package, a mounting cheese plate is included which provides 1/4”-20 threaded holes along the bottom and the sides. This flexible mount allows an endless number of ways to attach a Star to any video rig.

The recorder handles trigger record start/stop and capture time code in sync straight from the camera with Atomos’ HDMI time code trigger protocols from camera manufacturers including Sony, Canon, Panasonic, Nikon and JVC. Recorded footage can be played back from the device and controlled for large screen client viewing.

Audio is another benefit of using an outboard recorder. Sound from the camera can be recorded directly on the two embedded digital channels. Also, an external microphone can be used via the audio line-in for an extra two channels of analog audio. This helps bypass the poor internal sound recording electronics of many DSLR cameras. There are also audio level, battery life and recording time indicators. Controls are large, easy to use colored buttons.

Matt Ivey, president of Atomos in the Americas, said though his company makes a wide range of combo recorder, player and monitors — he calls them “RPMs” — the Ninja Star is stripped down for record and playback only to keep it compact, light weight, very mobile and inexpensive. 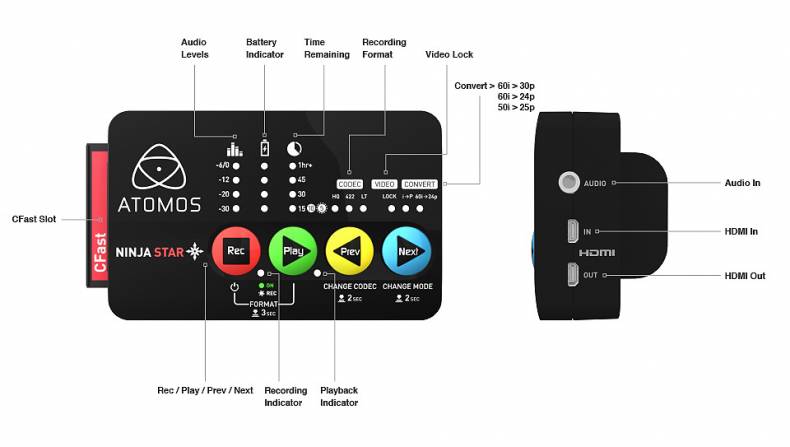 Though Atomos allows its customers to use any media they like in their drives, the Star was designed for quick motion and movement in extreme mobile environments. Because of this, it was designed to use CFast drives for video storage.

“We put all the firmware and hardware circuitry in our drives so they will work with hard drives, flash memory and other drives like Cfast,” said Ivey. “If you work with video you know that a ProRes codec has a nice steady constant bit rate frame-based type of codec. Once you master being able to control the data, you can ride the rough spots in and out. That’s why they have big buffers in the product.”

However, hard drives work best for devices in fixed locations and not in rapid motion situations for which the Ninja Star is designed. It works, Ivey said, for Steadicam operators, moving vehicles, drones and action shots.

“This is why the Ninja Star uses CFast, which can be expensive with the latest versions of the memory,” he said. “However, we can use version 1.0 which is much cheaper. We brand and sell the lower cost 1.0 cards. The 64 GB version is only $159 and has plenty of write speed for recording HD video.”

Ivey called the Ninja Star a toolkit for video recording and playback. “A hidden feature is how good these devices are at video playback. They are also truly easy to use. They are made to look like a little tape deck.”